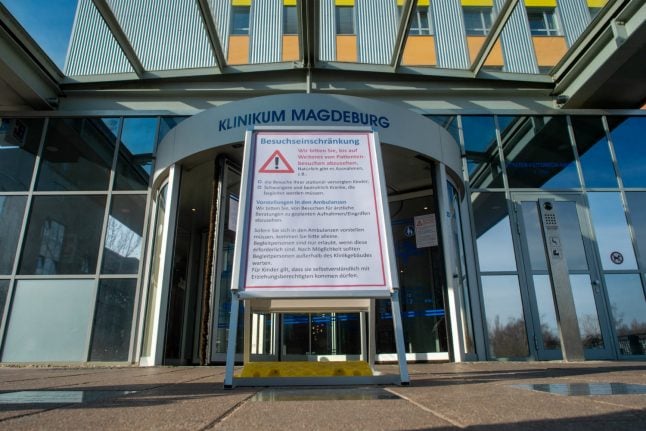 A sign advises of visiting restrictions due to the coronavirus at Magdeburg University Hospital. Photo: DPA

For the first time in his life, Andrzej Zebrowski will not celebrate Easter with his family.

Instead, the Polish surgeon will spend the holiday this year in the German hospital where he works to help his colleagues cope with the coronavirus crisis.

Like many others, Zebrowski found himself faced with a heartbreaking dilemma when the Polish government announced on March 27th that anyone entering the country would be placed in mandatory 14-day quarantine.

Return to safety and comfort in Poland, or staff the medical front line in Germany? It was a tough decision, and even tougher to tell his family.

According to local media, 300,000 Poles provide healthcare in Europe's biggest economy — some as doctors and nurses in hospitals, others as carers for the elderly.

“Our main task as doctors is to take care of patients professionally… I could not let my staff down at this crucial moment,” said Zebrowski, who works in Prenzlau, 30 kilometres from the border.

Zebrowski had been making the 50-minute journey every day from his home in Szczecin.

“Of course being separated from my family is not easy, but my wife and seven-year-old son understand and accept my decision,” he said. “It is an exceptional situation.”

Polish healthcare staff account for a fraction of the 69,000 workers who commute across the border every day. But without them, German hospitals would have a problem on their hands.

In some hospitals near the border, Poles comprise more than 30 percent of the workforce, according to Frank Ullrich Schulz, president of the regional medical association in the German state of Brandenburg.

To encourage Polish commuters to stay in Germany, some border regions are offering 40 to 65 euros a day to pay for meals and hotel rooms.

At the Prenzlau hospital, around half of the staff are Polish, including 22 doctors. The hospital has no COVID-19 patients yet, but intensive care beds are ready and waiting.

“Without them, many urgently needed procedures and operations could not be
carried out,” said hospital director Marita Schönemann.

Germany appears to be faring better than many neighbours against COVID-19.
The country has been lauded for its comprehensive approach to testing and as
of Thursday, the official death count was just over 2,100.

“Of our 40 intensive care beds, only three are currently occupied. But we are bracing for a wave,” said Ulrich Gnauk, director of the Asklepios hospital in border-town Schwedt, where half of the 40 Polish staff members have decided to stay.

Without them, the hospital would have had to close, said Gauk, who believes Europe has “failed” by not imposing blanket rules.

Germany will introduce a 14-day quarantine period for anyone entering from
April 10th, with an exception for cross-border commuters.

Many healthcare workers have nonetheless decided to return to their families.

“I didn't want to force my entire family into quarantine over Easter because of me,” said Jacek Witkowski, a doctor in the intensive care unit at Magdeburg University Hospital.

At the end of March, with Poland much less affected by the coronavirus than
Germany, he decided to return to Szczecin.

The temporary employment agency that had placed him in the hospital refused
to pay him during his 14 days of absence, forcing him to stop working for them.

“I'm disappointed… but I'm going to rest for a few days before looking
for a job, probably in Poland,” he said.