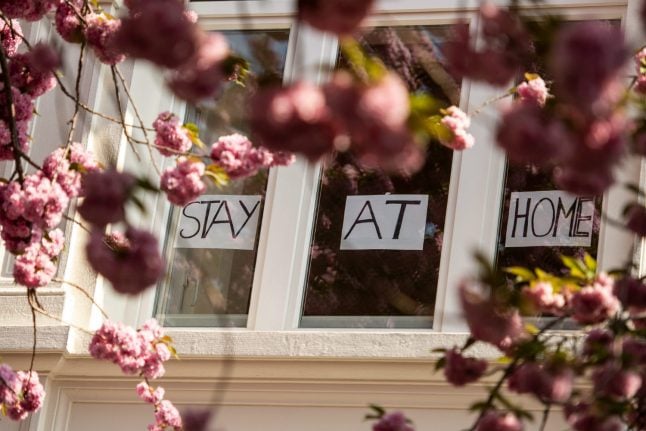 Germany introduced strict measures in March to slow down the spread of Covid-19. It means we’re only allowed to leave our homes for essential trips, such as for food shopping, doctors appointments and exercise.–

So how are residents coping? And is everyone following them? We asked readers to share their thoughts on the lockdown in Germany, and how they think the government is dealing with the crisis.

'It's difficult but we understand'

Jasmine Limgenco, 37, who lives in Hanover and is originally from the Philippines told The Local her family are all sticking to the rules and going out “only for groceries, important doctors appointments, and exercise around the block”.

“It’s difficult,” said Limgenco. “Especially with an energetic child stuck at home but we understand the purpose of these restrictions.”

The Limgenco family are getting through this time with home cooked food and movie marathons.

For Yash Trivedi, 19, from India, life in Wildau, Brandenburg, has changed drastically.

Trivedi and her housemates are quarantining together and following restrictions when they leave the house.

“We are now following all the rules advised by the Bundesregierung (government) like maintaining social distancing, going out only for essential activity specially shopping and washing hands frequently for 20 seconds,” she told The Local.

They are coping with the changes by playing games and talking a lot with each other.

Trivedi said the crisis is not as severe in Brandenburg as other places.

“People are following social distancing and most of the time the streets remain empty,” she said. “I do have faith in authorities as they are working very hard day and night, and controlling this pandemic well.

However, like lots of other readers, Trivedi said the lockdown measures should be extended “at least until the end of May”. Ian Williams, 67, who’s originally from England but now lives in Hohestein, Rhineland-Palatinate said he is self-isolating with his wife, working in the garden and building a pizza oven during the shutdown.

He also said the current lockdown measures should be extended until May.

Margaret Hieke, 62, from Texas and now in Würzburg, said she’s getting through the crisis with meditation, reaching out to loved ones through video chat, reading and keeping busy.

Hieke says people in her area are following the coronavirus lockdown rules.

“I believe the government is doing a good job,” she said. “I feel the restrictions are working and from what I have seen, most are keeping to the law.”

However, she said the measures shouldn’t be lifted too early.

A 30-year-old in Mössingen and originally from the US told The Local how she is self-isolating due to being immunosuppressed and has asthma.

She said: “I'm worried about the future as we have to move to Cologne in June so I can start my PhD there, and it'll be difficult with the restrictions. I also feel useless because my job is lab based, and there is nothing I can do at home.”

For Sonia Vega, 40, who’s in Cologne and originally from Florida, movies are also important, along with TV shows, and keeping in touch with friends and family via texts or calls.

Vega, who is pregnant, said she only goes out for doctor appointments and grocery shopping, plus walks for exercise about three to four times a week.

Like other readers she’s worried about too many people gathering outside.

“I see some young people not following the rules.” she said. “The days are nice and there’s a lot of people in parks. I think that parks should be closed too.”

Limgenco in Hanover says she has faith in the German government.

“I think they’re handling it better than other parts of the world,” she said. “Most people are following the restrictions but as the weather becomes warmer, there are more and more people outside.”

She says measures should remain in place until there are no more new cases.

Melbourne-born Sonya Kelly, 47, in Hannover said she and her husband were “astonished” at the amount of people going outside and queuing for ice cream on warmer days.

Jessica H, in Berlin and from the UK, says she is really worried about people not sticking to coronavirus restrictions.

On Thursday, Chancellor Angela Merkel made a fresh appeal, urging residents to stay at home whenever possible.

But Jessica said: “People break the rules everywhere. Every time you go to the supermarket there is someone who acts like they don't understand the need to keep 1.5m from you.

“I even saw a corona party the other night at the park by the Friedhof in Pankow with at least eight people drinking beer and dancing to bad techno. There is still a lot of selfish people leaving the responsibility to do the social distancing for other people.”

She called for more testing to be done and more consistent enforcement of the rules.

Natalia Fernandez, 26, had a similar experience in Berlin. She said: “In Köpenick (a suburb of Berlin) people follow the rules; however in places like Kreuzberg, Neukölln or Mitte it's like people don't care and don't follow the rules at all.”

Fernandez said she was recently in Görlitzer Park in Berlin and “there were many groups of people” despite a ban on gatherings of more than two (excluding families). People in a Berlin park this week. Photo: DPA

She said police told people to split up but as soon as the officers left, the groups gathered again.

Despite this she said German authorities were doing a good job.

“What I'm really afraid of is the huge economic crisis coming after,” she said.

Suzan French, 72, originally from the UK and now in Brandenburg, said the government was “excellent” but police should be controlling the social distancing measures more in the suburbs.

Rabiul Hossain Chowdhury, 29, who is based in Kiel and originally from Bangladesh, says he is staying at home and only going out for essential reasons.

He has faith in authorities but added: “People aren’t following rules. I saw lots of people on the bus and also people are going out to enjoy the sunlight.”

Chowdhury urged the government to do more to support international students.

“For example, I lost my job and as a foreigner I didn’t get any financial help and my money will be finished soon,” he said. “So a small help would be really important for lots of students.”

Sushrutha Gundu, 23, who's in Karlsruhe and from India, had a similar point of view, urging Germany to support students so they can complete their degrees.

Readers said the government needed to take more action before lockdown was lifted.

Victor Adebayo, 33, in Weiden in der Oberpfalz and originally from Nigeria, said:  “I think more needs to be done in terms of testing for the virus before people are allowed to resume back to work otherwise we might face another wave of the spread of the virus.

“The government should also make masks available for purchase.”

Of course the situation can be different depending on where you live. Some readers told us what the atmosphere is like where there are stricter coronavirus lockdown rules.

Amanda Perez, 31, from Mexico said: “In Munich, where I live, lockdown measures started from the 21st of March. Gatherings aren't allowed, leaving your house is only allowed if you have a valid reason.

“My life has changed, definitely. But my employer has refused to allow home office.”