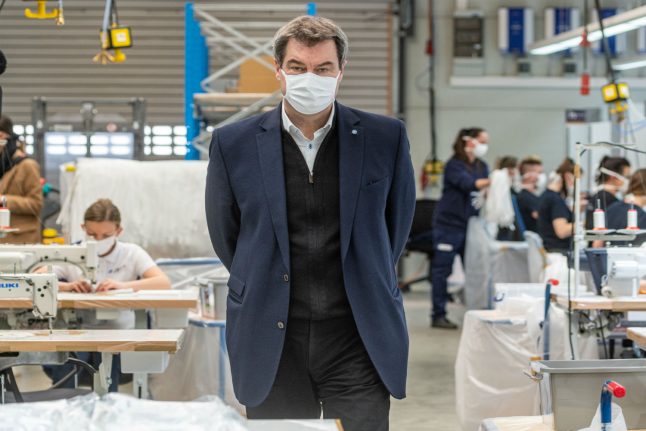 Markus Söder (CSU), Minister President of Bavaria, stands with a face mask in a production hall of the automotive supplier Zettl on April 2nd. They are now producing face masks. Photo: DPA

Söder’s comments, made following a cabinet meeting on Tuesday April 7th, add to a growing debate over whether the Bundesrepublik should mandate that its residents wear a mask, as both neighbouring Austria and the eastern city of Jena began to enforce on Monday.

Söder also said that, “We must prepare people to live life with the pandemic. Part of that means wearing a mask more often,” he told the public broadcaster ARD.

As of Wednesday morning, Germany had over 107,600 coronavirus cases, according to data from Johns Hopkins university. Bavaria is the country's worst-hit state, with over 27,564 cases.

“If as many masks as possible are used in the areas where people come together, then that benefits everyone,” said Söder, of the centre right Christian Social Union (CSU).

According to Bavarian health minister Melanie Huml (CSU), the southern state is expecting a mask delivery “in the millions” from abroad, with orders in the double-digit millions.

On Tuesday, Söder tweeted about a delivery eight million masks which had arrived at Munich's airport. “In the long run, we need, however, more masks in Germany. We need our own emergency production. We have already begun in Bavaria.”

Söder referred to the production of masks by various companies in Bavaria, including several which did not produce them before the crisis, such as car parts manufacturer Zettl.

A concept paper from Germany’s federal Interior Ministry on the country’s exit plans after the partial lockdown also talks about the introduction of compulsory masks in return for relaxation of other measures.

For example, the wearing of protective masks in buses and trains – as well as in public buildings – is to be made mandatory as soon as enough masks are available, according to the draft plans. Markus Söder (CSU), state premier of Bavaria, stands with a face mask in a production hall of the automotive supplier Zettl on April 2nd. Photo: DPA
Is it beneficial to wear a mask?

The Robert Koch Institute announced last week that wearing such a mask could help slow the spread of the coronavirus – even if a person doesn’t show symptoms.

Yet health care professions and politicians have warned against using masks which may be in short supply, and needed more urgently in hospitals.

“Do not order or buy professional protective masks on the Internet,” said German Doctors' Association President Klaus Reinhardt. “If you are not working in the healthcare sector or have corresponding preexisting conditions, you do not need FFP2 or FFP3 masks.”

Health Minister Jens Spahn (CDU) said last week that a distinction must be made between medical masks to protect medical staff from infection from patients and other masks worn in public – including self-sewn ones.

The latter are intended to prevent others from becoming infected, and could “actually also help to slow down the spread of the virus,” said Spahn.

The social media initiative #maskeauf (masks on) has taken off in Germany, with celebrities such as Lena Meyer-Landrut, satirist Jan Böhmermann and presenter Anne Will encouraging donning a face covering.

Several online resources around Germany are also devoted to helping people stitch together their own masks.

Yet as Chancellor Angela Merkel said in her weekly podcast: “Even if you decide to wear a simple face mask, please remember that it can never replace keeping your distance.

“As long as there is no vaccine or medication against the virus, maintaining a distance is the most effective protection.”