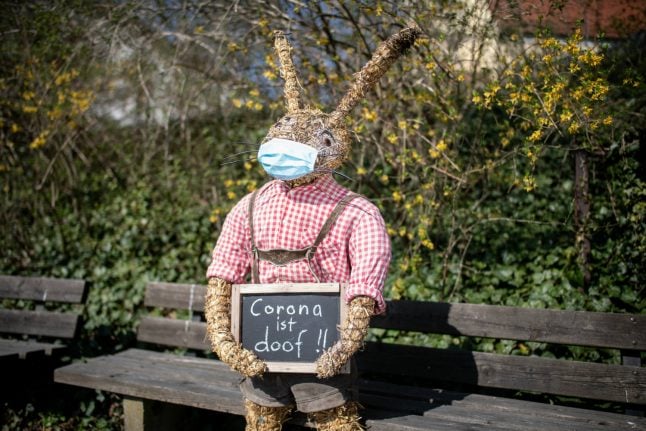 An Easter Bunny with a face mask in Munich holds a sign reading "Corona is dumb". Photo: DPA

“A pandemic does not recognize holidays,” said Chancellor Angela Merkel last week,  as she announced that Germany would extend its coronavirus lockdown measures until April 19th.

People in Germany are being told to refrain from family visits and travel over Easter because of the coronavirus pandemic.

This means that visits to relatives and trips in most states are not allowed. Day trips and attending church services are also generally not allowed. Those who break rules face steep fines – but there are some exceptions across the states.

Here is what is (and isn't) allowed over the long Easter weekend across Germany:

Baden-Württemberg: Those who have a second home in the southwestern state are allowed to spend Easter in it. Although a day trip – to the Black Forest, for example – is not recommended, it is also not prohibited.

While gatherings of up to five people are allowed in private spaces, State Premier Winfried Kretschmann (Greens) has advised people not to visit relatives or friends over the long weekend.

Bavaria: Nobody should leave their home without good reason – such as sports and exercise in the fresh air alone or with one other person. This also applies to trips to a second home, to a campsite and excursions into the mountains.

You are allowed to visit your allotment garden (Kleingartenanlage) – but only with close family members from your own household.

Berlin: In the capital city, people are also being told not to leave their homes if they have no good reason to. That also applies to a trip to your second home. Visiting relatives in other states is not allowed, but it is possible to leave the city and return – for example, to go cycling to Brandenburg. A cyclist in Sieversdorf, Brandenburg on Tuesday. Photo: DPA

“We made a conscious decision not to close Brandenburg off to Berlin or to build a new Berlin Wall,” said the city’s interior minister Michael Stübgen on Wednesday. However, only excursions for sports purposes and not tourism trips are allowed, he said.

Brandenburg: People are allowed to move freely within the state. While Brandenburgers are advised not go on excursions, they are also not prohibited from doing so. Holiday homes or apartments owned by the state may be used. An exception is the district Ostprignitz-Ruppin, which has imposed an entry ban.

Bremen: Tourist overnight stays are not permitted, but there is no regulation on second homes. A celebration at home, even with several people who do not necessarily belong to the same household, is not prohibited, but also not recommended, reported local news website buttenunbinnen.

Hamburg: There is currently no curfew for the Hanseatic city, and no ban on entering or leaving it. However, tourists are not allowed to stay overnight.

Hesse: Drastic measures apply around Lake Edersee in northern Hesse. Owners of secondary residences were asked to leave, because the district of Waldeck-Frankenberg has prohibited their use.

Travel for tourist purposes is not allowed throughout Hesse. The state government recommended that parking lots at popular tourist destinations be closed.

“Easter is traditionally a holiday season, a time in which families and friends visit each other, and people go on day trips. I sincerely ask for your understanding that this should not happen this Easter”, appealed Prime Minister Volker Bouffier at a press conference on April 1st.

Mecklenburg-Western Pomerania: Public order officers have been inspecting vehicles registered outside the state, and those who don’t live in the northeastern state are being asked to leave.

Over the Easter weekend, even locals are forbidden to make excursions within the state, for example to the Baltic Sea islands, the coast and the Mecklenburg Lake District.

Travel for private visits “to family members (nuclear family) who have their first place of residence in Mecklenburg-Western Pomerania” is still permitted, according to the local ordinance. Lower Saxony: Some districts, for example on the North Sea coast, are closed to tourists and second home owners. The strict ban on visiting people who do not belong to your own household has recently been relaxed – Easter visits in a slimmed-down form are possible.

It is still necessary to reduce the contact to other people outside of relatives in your own household to an absolutely necessary minimum, says health minister Dr. Carola Reimann in a statement. The central state has laid out exactly what’s allowed and what’s not on its website.

READ ALSO: Ten ways to celebrate Easter in Germany like a local

However, all residents are urged to refrain from tourist travel, especially during the Easter holidays. This includes day trips within the state or to the neighbouring Netherlands and Belgium.

Rhineland-Palatinate: There is no precise regulation on the use of secondary residences here. As is the case everywhere in Germany, holiday homes may not be rented out to tourists. Hotels are also closed, like in most other places.

Saarland: Travellers are not allowed to enter or leave Saarland, the second state in Germany after Bavaria to impose a lockdown, without good reason. You even need a good reason to leave your home such as for work or food shopping. Visits to friends or acquaintances are not permitted.

Saxony-Anhalt: Tourist travel is not allowed, as is travel to a secondary home. Instead of an Easter excursion, for example in the Harz Mountains, people are advised to go for a walk locally. As per tradition, Easter eggs are already hanging from trees in Wentorf, Schleswig-Holstein. Photo: DPA

Thuringia: In public places you are allowed to walk alone, in pairs or with members of your own household. The Thuringian Ordinance on the Containment of Coronavirus does not contain any specific regulations on the use of second homes.

Can I use my car?

Even in states with curfews, such as Bavaria or Saarland, it is still possible to use a car – but only for shopping or going to work, and with one other person who isn't family or part of the same household.

The Ministry of the Interior in Bavaria puts it this way: The car may be used as a means of transport to get from home to a destination, but there must be a good reason to visit that place.

In Bavaria, good reasons include visiting partners, the elderly, the sick or people with disabilities