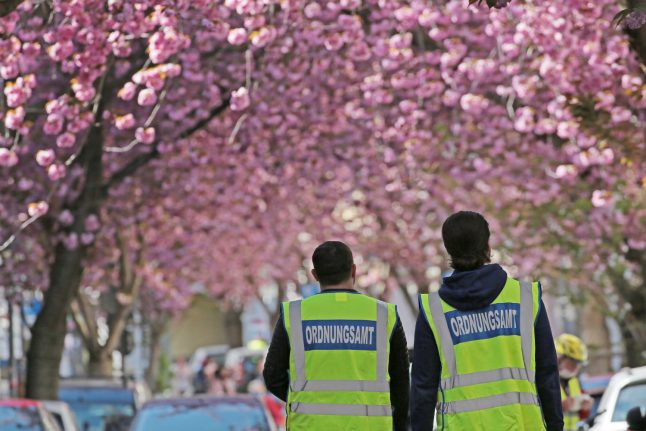 States across the country are finalising what punishments people who flout the restrictions should face. They can differ from state to state because Germany is a federal country.

In case of doubt, authorities can refer back to the penalty framework of the IfSG (Protection Against Infection Act) which stipulates that fines of up to €25,000 and prison sentences of up to two years are possible.

If someone becomes infected with coronavirus due to another person breaking the rules, a prison sentence up to five years is possible.

The restrictions will initially be in place across Germany up to and including April 19th.

The 'Corona Fines' catalogue from Germany's most populous state of North Rhine-Westphalia (NRW) has served as a model for authorities in most other states.

NRW had the first major coronavirus hotspot in Germany – in the district of Heinsberg – and had to react quickly.

Here’s what applies in NRW (other federal states follow in alphabetical order).

To implement the 'ban on contact' (Kontaktverbot) the state government published a catalogue of penalties and fines. The amounts are based on the provisions of the Infection Protection Act.

Fines between €200 and a maximum of €25,000 can be handed to offenders under the law. This is regulated by the Protection Against Infection Act in conjunction with the Corona Protection Ordinance (CoronaSchVO).

These are the fines for people who do not comply with the regulations: People gather in the sun in Dortmund on Sunday. Photo: DPA

The above amounts apply to a first offence – in particularly serious cases they can be doubled. In cases of repetition, a fine of up to €25,000 may be imposed.

For operators of retail and food/drink outlets:

For operators of homes and hospitals:

The state government in Stuttgart is following the catalogue of fines imposed by NRW.  Here are a few other examples:

Since Friday March 27th, a separate catalogue of fines has been available as a guideline to all district administrative authorities in Bavaria. Public life has come to a standstill in the southern state after a lockdown was introduced on March 21st.

Meanwhile, the city of Augsburg has set a uniform fine: if someone does not react to an initial warning, they must expect to be reported by police, and €55 is due immediately (per person).

In Bavaria the rates can become lower or higher in some cases. For example in the case of repeated violations, the standard rates would be doubled, in the case of negligent behaviour, they would be halved.

As The Local reported, violations of the coronavirus partial lockdown restrictions can result in steep fines in the German capital. Berlin's catalogue of fines provides for fines of €25 to €500 if people form groups of more than two people and resist police requests to go home.

There are also high fines for operators of venues. For example, opening a restaurant can cost the operator €1000 to €10,000. Anyone offering tourist overnight stays in the capital can expect fines of between €1,000 and €10,000.

READ ALSO: 'Rest breaks are allowed': What you need to know about Berlin's new coronavirus rules and fines

A catalogue of fines has been in force in Brandenburg since Thursday. Those who violate the regulations must expect sometimes severe fines of up to €25,000.

Those who take part in a public event in spite of the ban, for example, face fines of between €50 and €500.

Bremen has issued a catalogue of fines for violations of the quarantine order in the coronavirus crisis. Interior minister Ulrich Mäurer, of the Social Democrats, presented the list on Friday, which provides for fines ranging from €50 to €5,000.

The Hanseatic city was one of the first federal states to issue a catalogue of fines. Here’s an overview of them:

Anyone who does not adhere to the strict 'ban on contact' in the fight against the coronavirus pandemic in Hesse also faces steep fines.

Depending on the severity of the violation, fines of €200 to €5,000 can be slapped on offenders, authorities say. Especially serious violations can even be reported as criminal offences.

A fine, for example, can be imposed if someone violates contact rules in public, runs a restaurant illegally, or disregards the ban on visiting senior citizens' homes.

The fines are based on the Protection Against Infection Act (Infektionsschutzgesetz). A woman on a beach in Offenbach in Hesse on Sunday. Photo: DPA

A catalogue of fines is being drawn up in Mecklenburg-Western Pomerania for violations of coronavirus measures.

Fines here will range up to €5,000, said interior minister Lorenz Caffier, of Angela Merkel's Christian Democratic Union (CDU), on Thursday April 2nd in Schwerin after a cabinet meeting. Those who do not keep the required minimum distance to other people, for example, face a fine of €150. The catalogue of fines is similar to that drawn up in other northern German states.

By Wednesday evening, police had registered 121 offences in connection with coronavirus bans, according to the northeastern state's interior ministry.

Caffier has also announced increased controls for the upcoming Easter weekend (beginning April 10th), including at the access roads to the Baltic Sea islands and the peninsula Fischland-Darß-Zingst. Excursions are not permitted in certain areas of Mecklenburg-Western Pomerania during Easter.

The state government of Lower Saxony is preparing a state-wide catalogue of fines for violations of coronavirus measures which will likely be introduced this week.

According to the Protection Against Infection Act, fines of up to €25,000 are possible for violations – in severe cases.

A ban on Easter trips, like Mecklenburg-Western Pomerania has imposed for its holiday areas, is not planned for Lower Saxony. However, local authorities could, for example, close beaches and other destinations in individual cases.

Violations of the conditions imposed in Rhineland-Palatinate can result in fines of up to €25,000, according to the state government.

According to the decree, the following punishments are planned, among others:

For violations of coronavirus rules, a catalogue of fines has been in force in Saarland since Wednesday, April 1st.

Lower fines can also be issued for negligent offences. The standard rates apply to the first violation and they will be doubled for each subsequent violation. The upper limit is €25,000.

All infringements are administrative offences. Acceptable reasons for leaving the house include work or shopping.

Anyone who leaves their home in Saxony without good reason can now be fined €150. The beach promenade with the pier in the Baltic resort of Zinnowitz on the island of Usedom was deserted on Sunday. Photo: DPA

Violation of the ban on visiting old people's and nursing homes is punishable by €500.

If anyone is caught hosting more people in their home than usually live there, a fine of between €500 and €100 can be issued.

Meanwhile, police can issue warning fines of up to €55 for minor violations. Parallel to this, fines and penalties from the Protection Against Infection Act apply.

Here's a few examples of fines for those who flout rules in Saxony-Anhalt:

In Schleswig-Holstein, the Protection Against Infection Act penalty framework has so far been in force. However, a separate catalogue of fines is likely to be put into force.

Thuringia is also planning its own catalogue of fines which should come into force this week, a spokeswoman for the health ministry has said.

So far, police and public order officers are evaluating violations such as shop closures as violations of the Protection Against Infection Law.