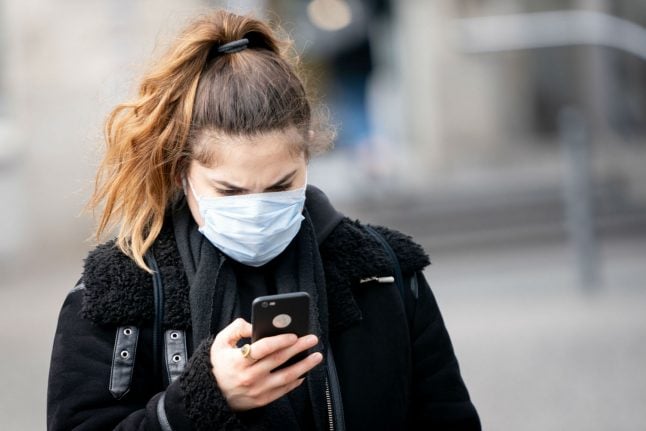 A woman in Berlin's Alexanderplatz looks at her phone on Wednesday. Photo: DPA

Even Chancellor Angela Merkel — who often refers to her youth in surveillance-ridden communist East Germany — said Wednesday that if it turns out to be a helpful way of tracking the spread of the virus “I would… of course be willing to use it for myself”.

In some ways, Germany appears to be faring better than many of its European neighbours in its battle against the coronavirus.

Europe's biggest economy has so far managed to limit the number of deaths from Covid-19 to under 1,000, partly thanks to aggressive testing modelled on the South Korean approach.

READ ALSO: How Germany has turned to South Korean model in coronavirus fight

It has also avoided a strict lockdown like those in France, Italy or Spain.

Merkel and her government are already looking ahead to the next phase, when they hope it will be possible to relax social distancing rules and reopen some public spaces.

And according to Health Minister Jens Spahn, “for that to be possible, we need to be able to identify and reach anyone who has had contact with an infected person very quickly”.

When the government first proposed using mobile phone data to help track the spread of the virus in mid-March, it was forced to back down after a public outcry.

Under the proposals, mobile phone operators would have been required to hand over the data of 46 million customers to help the authorities trace the contacts of infected people.

Such non-consensual mass surveillance was a shocking prospect in a country still traumatised by memories of Nazi dictatorship and later the Stasi secret police in the former communist east.

The government is now reviewing proposals and will come up with a new plan “in the coming days”, according to Spahn, who is convinced that “the use of mobile phone data will be a key factor against the spread”.

Under the new plans, data will be shared “on a voluntary basis”, according to Justice Minister Christine Lambrecht.

A proposed smartphone app will track and record people's interactions via bluetooth for two weeks, without using geolocation tracking and with a promise that data will be securely protected.

If a person becomes infected, the app will automatically send a push notification to anyone they have crossed paths with in the past two weeks, to warn them of the risk of infection.

Only those who have downloaded the app will receive the infection warnings, and the identity of infected people will be kept secret.

The idea was inspired by a similar digital tool used in the city-state of Singapore, which has managed to limit the spread of the virus despite being very densely populated.

“HHI is working on an application that will make it possible to record the proximity and duration of contacts between people on mobile phones over the past two weeks, completely anonymously and without the need to record their location,” a spokeswoman for the company confirmed to AFP.

The firsts tests were carried out at an army barracks in Berlin on Wednesday, according to media reports.

Using people's data in this way also has the approval of Germany's federal commissioner for data protection, with certain conditions.

“The collection and evaluation of personal data to interrupt chains of infection can only be carried out with the consent of citizens,” commissioner Ulrich Kelber told AFP.

“This data should be stored only for a limited and clearly defined period, and with the sole aim of fighting the pandemic. After that, it should be deleted,” he said, predicting a “strong willingness to participate” if these conditions are met.

According to Kelber, implementing widespread Chinese-style surveillance would be impossible in Germany.

“There is no comparable technological infrastructure for surveillance and, more importantly, Germany has no laws that allow virtually uninterrupted surveillance of citizens using smartphones, apps or other devices,” he said.

Meanwhile, the German public seem to be softening to the idea of handing over their mobile phone data.

According to a YouGov poll published on Tuesday, half of Germans are in favour of the idea, while only 38 percent consider it inappropriate.