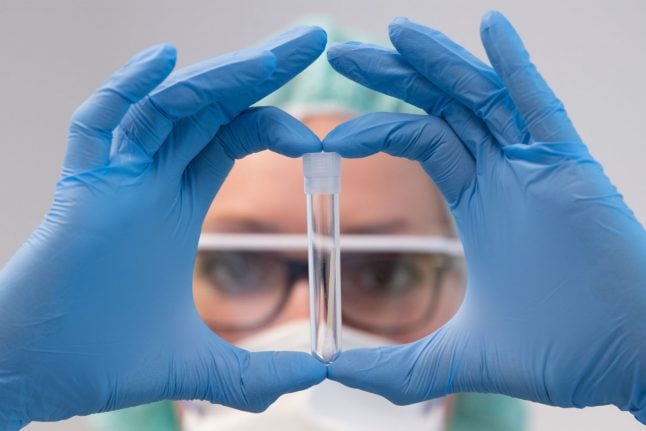 a nurse, holds a swab in a test tube in a treatment room of the Corona Outpatient Clinic at the Paracelsus Clinic in Zwickau, Saxony. Photo: DPA

However, the number of undetected cases is thought to be much higher. “It must be assumed that there is an under-recording,” the institute explained to the newspaper.

The figure applies to hospital staff, it added, and not those working in doctors' surgeries, laboratories, retirement and nursing homes or outpatient care services.

The SZ, in partnership with public broadcasters NDR and WDR, sent out nearly 400 inquiries to state and local health ministries looking for this information – and were mostly told it was not available.

Yet they were able to find the following figures, which they say could shed light on the coronavirus outbreak's burden on Germany's public health care system.

READ ALSO: What's the latest on coronavirus and what do I need to know?

In Germany's most populous state of North Rhine-Westphalia, 322 employees of outpatient and inpatient care facilities were infected as of Wednesday, according to the State Ministry of Health. Another 1,485 people were in self-quarantine.

The state was unable to provide information on the number of infected doctors.

According to Baden-Württemberg's State Health Office, 566 infections were registered among medical staff in the southwestern state as of Wednesday, almost twice as many as in the previous week.

Zwickau in Saxony alone reported that 60 doctors and nursing staff in the district have become infected, according to the state's health office.

According to the Association of Statutory Health Insurance Physicians in Bavaria, 244 medical practices are currently already closed in the southern state – 141 due to employees in self-quarantine, 82 for lack of protective equipment, and 21 for lack of childcare.

In Baden-Württemberg at least 80 medical practices are also closed.

On Wednesday, the Association of Statutory Health Insurance Physicians in Bavaria addressed the public with a call for help and spoke of a “blatant lack of necessary protective equipment”.

“If new material does not arrive today, dark times are dawning for outpatient care in the Free State,” stated a press release.

READ ALSO: Why has Bavaria been hit so badly in the coronavirus pandemic? The Robert Koch Institute recommends that, when reporting coronavirus infections, information on the profession of the affected people should also be included – for example if they work in a hospital.

However, the German government, several state governments and many German health authorities do not have systematically collected figures on the number of infected medical personnel, reported SZ.

Doctors' representatives are now demanding that the figures be better recorded in order to shed light on the health system burden.

Since the beginning of the pandemic, governments all over the world have declared that the massive restrictions in public life were primarily intended to prevent overloading the health system.

This often refers to the limited number of intensive care beds, and less often to the people who have to care for patients.

The new figures come as the chief of the country's hospital federation announced that German hospitals have increased their number of intensive care beds to 40,000.

Three out of four of the beds (30,000) are equipped with ventilators, Gerald Gass, head of the German Hospital Federation, told Rheinischen Post daily.

Berlin had urged hospitals to double their intensive bed capacity from 28,000 previously to 56,000, to deal with any potential surge in patients needing 24-hour care.

Currently, around 2,000 of the intensive care beds are occupied by Covid-19 patients.

Germany has also taken in more than 100 seriously ill patients from other EU nations.

Europe's biggest economy has recorded 73,522 confirmed infections and 872 deaths as of Thursday, according to the Robert Koch Institute.

Authorities have ordered most shops shut, schools closed and imposed a ban on public gatherings of more than two people up to April 19th at the earliest.