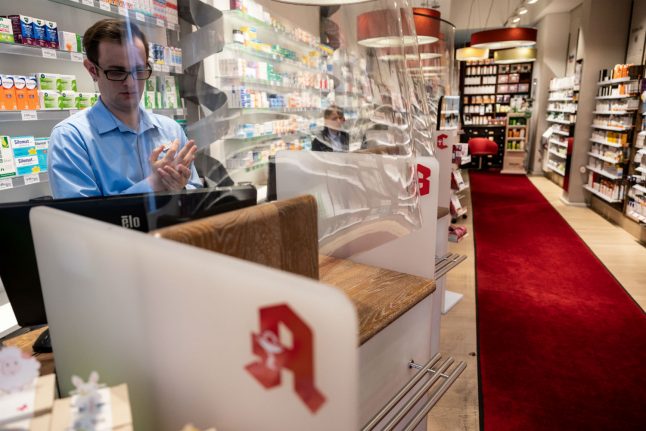 A plexiglass shield at a pharmacy in Dortmund. Photo: DPA

For plexiglass manufacturer Claus Müller, business has never been better – but no one is celebrating.

The Plexiglas Riesner processing plant in Wiesbaden is abuzz with activity as owner Müller and his workers race to get out the next batch of orders, cutting and bending acrylic sheets to size while the phone rings off the hook.

It's the busiest time in the small company's 114-year history, with requests coming in faster than the supply chain can handle.

“We have endless work but the reason is very sad, so we can't be euphoric about it,” Mueller tells AFP.

READ ALSO: Why people in Germany don't need to panic buy during the coronavirus pandemic

Demand for “sneeze guards” has surged as companies scramble to protect employees from a deadly virus that is transmitted through droplets from an infected person's mouth or nose, putting at risk those whose jobs don't allow them to keep the recommended two-metre (six-foot) distance.

“It's the sensible thing to do if close contact can't be avoided,” says Müller.

In the space of mere weeks, German shoppers have become used to the sight of plexiglass barriers separating them from cashiers in grocery stores, among the few retailers that remain open.

Elsewhere too, supermarket chains are opting for the relatively affordable and easy to install screens, from Carrefour in France to Walmart in the United States.

Müller says his sales have doubled in March compared with pre-virus times, boosted by business from hospitals, pharmacies, hotels, banks, and doctors' offices.

The company is also working on a large order destined for local Aldi supermarkets, with the jovial Müller regularly rolling up his sleeves to pitch in with the three employees on the workshop floor. A shield next to a cashier at a supermarket in Göppingen, Baden-Württemberg. Photo: DPA

But he is fast running out of stock, and estimates he only has enough to keep going for another week or two.

“It seems the whole market in Germany is coming to a standstill,” Müller says.

While plexiglass is often used as shorthand for any acrylic sheets, Müller points out that the high-quality Plexiglas (spelled with a single “s”) that he mostly works with is a registered trademark.

And his Plexiglas wholesaler has warned that deliveries of raw materials are grinding to a halt as the virus disrupts global production lines, with many factories shutting down or putting workers on reduced hours.

“We're not expecting new deliveries until early May,” Müller says.

“After earning double in one month, the pressure is off and we can get by for a bit,” Müller says, declining to give numbers.

“We won't go bust, unlike many other companies,” he sighs, expressing concern for a friend whose snack bar has been hit hard by Germany's lockdown measures.

The Plexiglas Riesner company started out as a family glass-cutting business before founder Karl Riesner's son switched to cheaper and easier to manipulate plexiglass in 1957.

Müller took over the firm in 2004 after stumbling across it on a government website that connects entrepreneurs with small and medium-size “Mittelstand” companies, considered the backbone of Europe's top economy, in need of successors.

“I ran the numbers and knew I could make it work,” he recalls.

Looking past the coronavirus crisis, Müller expects demand for plexiglass from food retailers will drop off, and predicts that many will eventually remove the screens.

But he can see plexiglass becoming a fixture in pharmacies and doctors' reception areas.

One of his customers, pharmacist Iris Erdelmeier, says she feels more comfortable working behind the plastic safeguard while the pandemic rages, with plexiglass dividers installed at all three of her pharmacy's tills.

“We feel much safer with the protective screens. They also protect our patients in case we ourselves were to be infected without showing symptoms,” she says.

“Customers have actually told us they like the screens, and have suggested we keep them permanently.”

By Yann Schreiber and Michelle Fitzpatrick in Frankfurt