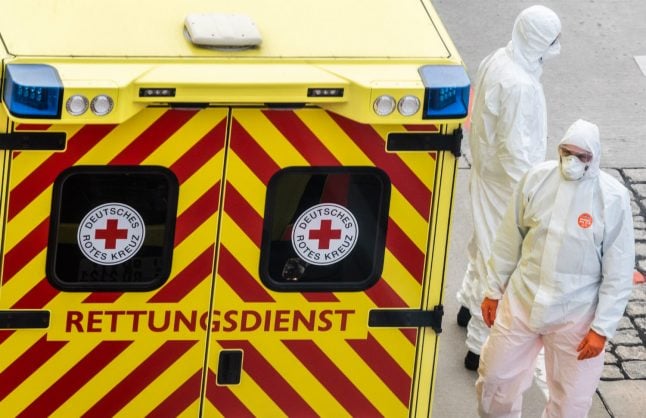 Experts are cautiously optimistic that coronavirus measures in Germany are working. However, they’ve warned the pandemic will continue “for weeks and months” and that the death rate will rise.

That was the message form Lothar Wieler, head of Germany’s public health organisation the Robert Koch Institute (RKI) on Tuesday as he gave an update on the current situation in Germany.

“The pandemic is continuing and will carry on for weeks and months,” said Wieler during a press conference in Berlin.

As of Tuesday afternoon, there were more than 67,000 cases in Germany and 687 deaths – an increase of 70 deaths compared to the previous day – according to figures compiled by the Johns Hopkins University.

They differ slightly from RKI figures which only take into account electronically transmitted figures from Germany's states and are updated once a day.

Wieler said the public will have to stick to Germany's social distancing measures to stem the spread of the outbreak, as well as protect vulnerable people and relieve the burden on the healthcare system.

However, the public health chief said he was optimistic that coronavirus restrictions would be effective, saying he expected “tangible figures” on the impact of the measures to be available by Easter.

He urged for people to understand the risks of coronavirus. It came after a study showed only 41 percent of Germans said they believed COVID-19 is dangerous.

“I would like to ask everyone to take this disease seriously,” he said.

At the moment the mortality rate in Germany is 0.8 percent. However, as The Local has been reporting, this will likely rise as more older people contract coronavirus.

“Unfortunately, we now also have cases in nursing and old people's homes,” said Wieler. “We must unfortunately assume that the death rate will increase with it.”

He said last week around 350,000 people were tested and that was as many as possible at the moment.

What do we know about Germany's coronavirus patients?

The RKI has analysed clinical information on approximately 41,000 patients. The results found the average age of infected coronavirus patients is 47-years-old.

A total of 52 percent of them were male, 48 percent female. The most frequent symptoms were cough (43 percent) and fever (41 percent). Many cases were mild. Lothar Wieler, head of the RKI, in Berlin on Tuesday. Photo: DPA

What about those who've died?

According to the evaluation of clinical data, the average age of those who've died in Germany is 80-years-old.

A total of 506 of 583 people who've died (87 percent) were 70-years-old or older. The youngest person to die so far was 28-years-old and had underlying conditions, said Wieler.

READ ALSO: Why is the coronavirus mortality rate in Germany rising?

Here's a breakdown of the ages of the people who've died after contracting coronavirus in Germany:

As we reported on Monday, the oldest deceased patient so far was 99-years-old and lived in a nursing home in Würzburg.

But the disease has also led to the death of younger patients in their 40s and 50s, such as a 42-year-old man in Berlin who suffered from a lung disease and the partner of former Berlin mayor Klaus Wolwereit, who died at the age of 54.

When it comes to compulsory face masks in supermarkets, like those introduced in Austria and the German city of Jena, Wieler said he believed there was no need to introduce them Germany-wide.

For people with coronavirus, wearing a protective mask over the nose and mouth is certainly “sensible” to protect other people from infection, said Wieler.

However, face masks can retain droplets when coughing and sneezing which could transmit the disease.