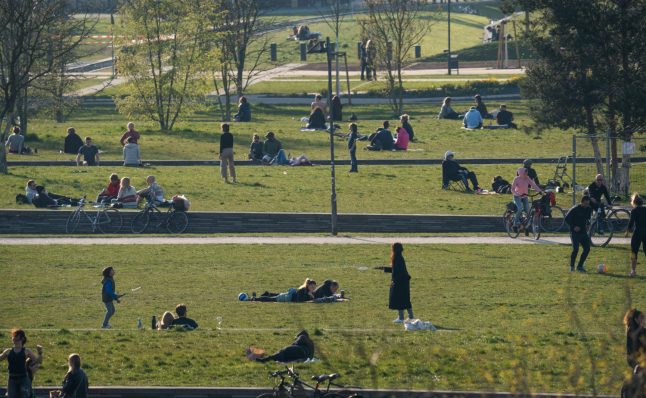 People enjoy the sun in a park in Frankfurt. Photo: DPA

Spring-like weather is usually a cause for celebration. But during corona-times, sunshine and warm temperatures mean that people are more tempted to flout lockdown restrictions.

And at the weekend, German police reported numerous violations of the rules which have been put in place to stem the spread of COVID-19.

On Monday morning there were more than 62,400 confirmed coronavirus cases in Germany and more than 500 deaths, according to data from Johns Hopkins University and the Robert Koch Institute.

Last Sunday, Germany announced a ban on gatherings of more than two people in public as well as other measures, such as a minimum distance of 1.5 metres between people.

Individual states have also introduced their own measures. In Bavaria and Saarland, for example, stricter lockdowns are being enforced.

In Bavaria, which has around 13 million residents, a curfew has been in force since March 21st which stipulates that going outside – initially up until and including April 3rd – is only allowed if there are good reasons for it.

These include going to work, necessary shopping, visits to the doctor, and “sports and exercise in the fresh air” – either alone or with the people you live with. Anyone who does not comply with the rules could be slapped with a fine starting at €150.

A spokesman for the Upper Bavaria North police told Welt that police officers had been “overrun” by the number of operations because the required minimum distance of 1.5 meters between people was not being maintained.

People were lying in the sun and some having picnics and barbecues, according to the spokesman. Officers were deployed more than 150 times. “It was absolute madness,” said the police spokesman.

In the Upper Palatinate region, violations of the restrictions also preoccupied police who were called out 140 times. In Middle Franconia, about half of all operations were related to curfew violations.

In Southern Swabia, however, it was quieter. “We searched mountains and huts, but the bans were adhered to,” a spokesperson for the Southern Swabia Police said on Sunday.

In Berlin, too, many people struggled to stay indoors, especially on Saturday when temperatures reached around 18C. Among other restrictions, regulations passed by the Berlin Senate stipulate that, due to the spread of the novel coronavirus, people are only allowed to exercise outside alone or in pairs.

Exceptions apply to families and residents of shared apartments. However, sitting on the grass or park benches, or having barbecues or picnics, is not allowed. In addition, a minimum distance of 1.5 metres must be kept from other people.

On Saturday, parks and green spaces were busy, and police were deployed to disperse groups and tell people to go home.

There were also arrests made after more than 200 people gathered at Kottbusser Tor in Kreuzberg.

Another incident occurred at Boxhagener Platz in Friedrichshain, where about 150 people gathered in a green space. Police told people to go home and closed off the affected square.

The weekly market, however, was allowed to continue. Meanwhile, another 40 people gathered at Rosa-Luxemburg-Platz for a demonstration and were ordered to leave.

Since March 14th, Berlin police have so far registered 754 violations against coronavirus measures.

There were also numerous violations of the 'contact restrictions' in Saarland. In the state's capital of Saarbrücken, according to the police, there were sometimes so many people on the banks of the Saar that it looked like there were no rules in place at all. People enjoying the sunshine in Dortmund on Saturday. Photo: DPA

In the state of Rhineland-Palatinate there was similar behaviour. Police in Bad Bergzabern, in the Südliche Weinstraße district, said they observed “that people were meeting, be it for picnics, barbecues or small talk, where the minimum distance was not maintained”.

In Lauterecken, in the Kusel district, several people “attracted negative attention” according to police. A 23-year-old man, who was with six other people, insulted officers during an inspection, police reported. Criminal proceedings were initiated against him.

The police in Mainz also found individual violations of the contact ban but said most people adhered to the rules.

“In summary, we had a few conspicuous groups of three, but for the most part people stuck to it,” a spokesman said on Sunday morning.