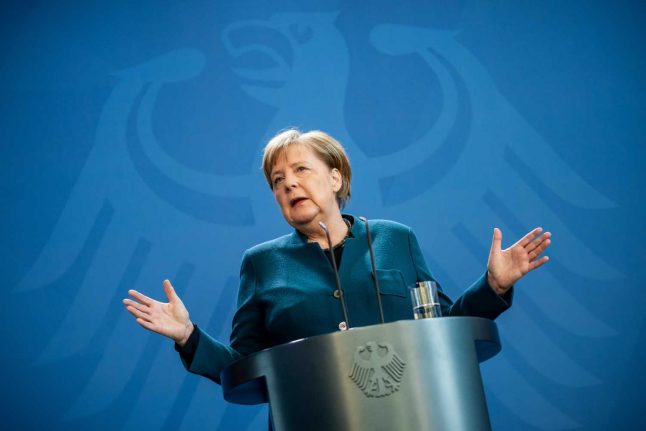 Shaking off years of record-low popularity, Merkel's centre-right CDU/CSU bloc is now enjoying approval ratings of around 32 to 35 percent, some six to seven points higher than just a few weeks ago.

It's a surprise turn of events for Merkel's Christian Democratic Union (CDU) which as recently as last month was riven by internal turmoil and debate over who would be the party's chancellor candidate when Merkel bows out in 2021.

“Merkel is back,” the NTV broadcaster said in an online editorial, noting that the veteran politician had reasserted control after a spell on the sidelines that left her vulnerable to criticism of being a “lame duck” leader.

“At the end of her time in office comes the greatest political challenge of her career,” it said — and it seems Germans like what they're seeing.

A former scientist, Merkel's clear grasp of the facts and cool-headed manner have reassured an anxious nation. Confidence in her right-left coalition government has also been bolstered by Germany's coronavirus statistics.

Although the number of cases continues to climb, reaching over 52,000 at the weekend, the country has a lower death toll than European neighbours.

It wasn't until March 11 that she gave her first press conference on the pandemic.

But since then Merkel has given a flurry of briefings and even made a television appeal to the nation to urge citizens to take the social distancing measures seriously.

The broadcast, watched by millions, was the first time during her 14 years in power that Merkel directly addressed the nation outside her usual New Year's speech.

Known for her low-key lifestyle, the 65-year-old then led by example and was snapped doing her weekly supermarket shop with just one pack of toilet paper in her trolley, and four bottles of wine.

In these times of crazed panic-buying, here's Angela Merkel showing how it's done:

This is the correct procedure. https://t.co/TMAkshKAlk

Merkel also won plaudits for going into home-quarantine after it emerged that she had been vaccinated by a doctor who tested positive for the coronavirus. Her own tests have come back negative, and the chancellor is running the nation by video link in the meantime.

The unprecedented societal and economic shocks triggered by the pandemic could shake up the race to succeed Merkel.

The CDU's planned April 25 congress to decide on a new party chief, who would also be the future chancellor candidate, has been scrapped along with all other major gatherings.

One of the leading contenders, longtime Merkel critic Friedrich Merz, has seen his star fade as his liberal business stance falls out of step with growing appetite for state aid to shield Europe's top economy from the virus fallout.

His rival Armin Laschet, who is backed by popular health minister Spahn, meanwhile is holding near daily press conferences as the state premier of Germany's worst-hit North Rhine-Westphalia region.

Merkel's centre-left junior coalition partner the Social Democrats(SPD) are also back in favour as Germans welcome the government's move to swiftly unleash billions of euros in stimulus spending to protect jobs and companies.

According to the best-selling Bild newspaper on Sunday, Merkel's CDU/CSU bloc and the SPD would once again claim a majority if new elections were held now — a feat no survey has pointed to since June 2018.

Their boost comes partly at the expense of the ecologist Greens, who had been riding high in recent months but now face a shift in voter priorities as the fight against the pandemic outweighs concern about climate change.

But the biggest loser so far appears to be the far-right AfD party, the largest opposition group in the national parliament, whose popularity has plunged below 10 percent in some surveys.

The COVID-19 crisis has brought “a return to values that are rather alien to the AfD: solidarity, reliability, caution, confidence in the power of science,” wrote Der Spiegel weekly.