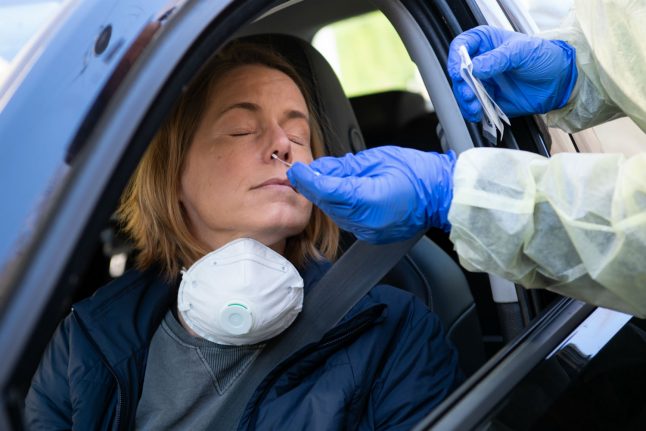 A woman receiving a nasal swab at a drive-in for coronavirus testing in Munich. Germany's Interior Ministry is pushing for more people to do the tests themselves in future. Photo: DPA

Increased testing capacities in Germany is “overdue”, according to a confidential strategy paper from Germany's Interior Ministry entitled “How to Get Covid-19 Under Control”, seen by the Süddeutsche Zeitung, and German broadcasters NDR and WDR.

According to the paper, the government must work towards a “rapid control” scenario in order to avert worse consequences for public health, the economy and society as a whole.

As of Friday morning, there were over 45,000 confirmed coronavirus cases in Germany and 276 deaths, according to data from the Johns Hopkins University and the Robert Koch Institute (RKI).

It mentioned South Korea, which has used mass tests and the isolation of infected people to slow down the spread of the virus without bringing public life to a standstill, as a role model. Unlike China, South Korea did not impose any general curfews.

By far, the most important measure against slowing the speed of the coronavirus, according to the paper, is “testing and isolating infected people”.

Both people who suspect they have coronavirus “as well as the entire circle of contacts of confirmed cases” should be tested, the document stated.

The experts say that testing capacity in Germany should be increased “very quickly”, with the aim to carry out 100,000 a day from April 13th, and 200,000 at the end of April.

Berlin-based senior virologist Christian Drosten estimated on Thursday that around 500,000 tests are currently being carried out per week.

The Interior Ministry stated that innovative solutions are needed for broad-based testing. In order to protect medical staff from those infected, people should do the the necessary nasal swabs themselves – for example in “drive-in” or telephone box test stations.

In order to better track down those who tested positive, computer-supported solutions and even location tracking of mobile phones should be used in the longer term, it added.

Anyone who tests positive would have to be isolated, either at home or in a quarantine facility. Once these procedures are in place, “they can immediately contain the small outbreaks that are likely to flare up again and again at reasonable cost over several years,” the paper stated.

It is also necessary to increase the number of hospital beds significantly. Currently, there are almost 300,000 beds in hospitals and rehabilitation clinics. Another 60,000 could probably be set up in hotels and exhibition halls, which Germany’s 16 states have already made space for.

A large misconception is that the coronavirus only affects the elderly or is harmless to children. According to the experts, all people in Germany must realise that they too could find themselves in a dramatic situation, for example because seriously ill relatives could be turned away from overcrowded hospitals.

Therefore, a “Germany-wide and transparent information and mobilisation campaign” is necessary.

The paper also assumes that the death rate and number of seriously ill patients are significantly higher than those published daily by the Robert Koch Institute (RKI).

While the RKI currently estimates the lethality of the pathogen in Germany at 0.56 per cent, the Interior Ministry estimates that 1.2 per cent of those infected will die from the coronavirus.