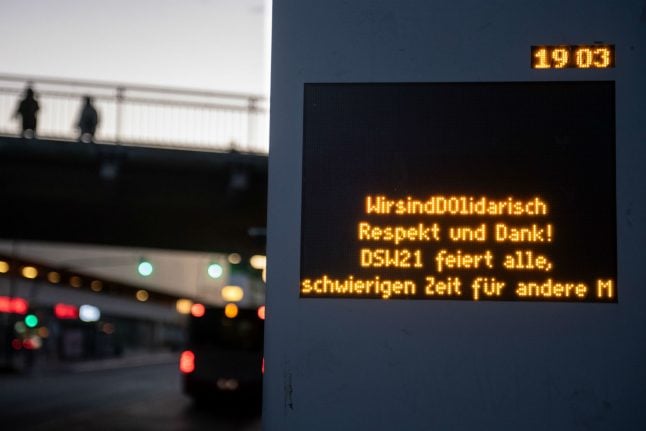 A traffic sign in NRW reads "We are united. Respect and thanks!". Source: DPA

In her speech to the nation last week, Chancellor Angela Merkel said that the Corona crisis is the greatest challenge facing Germany since the Second World War and that since then, there has been no cause for which our collective solidarity has been so important.

We take a look at just some of the ways people across Germany have been showing their support for their fellow citizens in these unprecedented times.

Thanks for frontline workers

While streets up and down the country have become eerily calm in the last weeks, hospitals have turned into hives of frantic activity, with healthcare workers toiling around the clock to deliver the best treatment to those battling the virus. As well as healthcare workers, supermarket operatives and delivery personnel have also still been going to work to ensure that peoples’ basic needs continue to be met.

To show their appreciation for these “Corona helpers”, citizens have been taking to their balconies to applaud those risking their health to help others. Videos of the nightly applause have been shared in Münster and Hessen, Köln, Berlin, Leipzig, Hamburg and many other regions.

In Stuttgart and Baden-Württemberg, banners displaying expressions of thanks have been appearing in front of hospitals and even on Autobahn bridges. A banner outside the Robert Bosch hospital in Stuttgart reads: “Thank you for your service”. Source: DPA

There have also been numerous reports of “cooking for heroes” actions around the country. In Hamburg, celebrity chef Tim Mälzer has been delivering food to doctors, care workers and supermarket workers.

In NRW, a local  restaurant has been delivering food to pharmacy workers and carers and in Berlin, Michelin starred restaurant Tulus Lotrek has been preparing gourmet meals for healthcare workers.

Before the Corona crisis many of us may have had no idea with whom we shared a building or a street. But given the threat that the virus poses to certain vulnerable groups, Nachbarschaftshilfe (neighbourhood help) groups have been popping up all over the country in an effort to help those members of the community to still get the things they need.

“Corona Help Groups” from all over Germany – from Aachen to Munich, Bonn to Karlshagen – have reported thousands of new members signing up to assist their neighbours in the last ten days. A lady in Essen delivers groceries to her elderly neighbour in Essen. Source: DPA

In Wuppertal, a group of students have set up a group called Studenten für Senioren (Students for seniors) where young people at university are paired with a pensioner who they can then help with shopping

A similar scheme by students began last week in Hannover and over 900 volunteers signed up within three days to provide a telephone shopping delivery service for older people.

Many money-raising initiatives have been springing up across the country to help those who are facing unexpected financial hardship as a result of the Corona crisis.

The aim of the scheme is to finance help for those  who are themselves helpers, but who are currently limited in their options, such as charitable organizations, support associations, but also many social projects.

Artists are a group who have been particularly hard hit by the Corona crisis and the scheme #AktionTicketBehalten (keep ticket action) has been set up to encourage people not to seek a refund for cancelled artistic performances.

There have also been numerous donation drives, including by the German Orchestra Foundation which has already raised thousands for now out-of-work professional musicians. Berliners queue to give blood – whilst keeping their distance from each other. Source: DPA

Those who can’t necessarily afford to donate but have been donating something even more precious – their blood.

After the German Red Cross reported a decline in blood donations last week, the blood donation service in the Northeast recorded an “overwhelming” response in the following days, which secured the supply of donor blood in the region.

In Karlsruhe, the German Red Cross reported even more blood donations than usual in the last weeks.