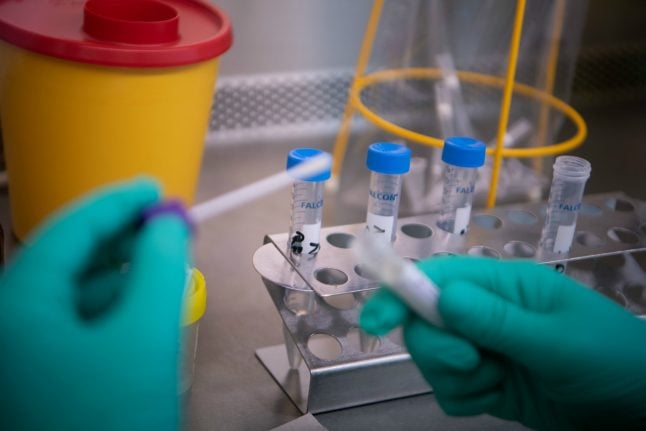 Christian Drosten, a Berlin-based senior virologist, said that Germany was carrying out an “extremely high number” of coronavirus tests, which meant experts were aware of more cases, including milder ones.

Speaking at the launch of a government-backed new network for the treatment and research of COVID-19 which is being set up in Berlin, Drosten estimated that around 500,000 coronavirus tests were being carried out each week in Germany.

“The reason why Germany has so few deaths compared to the number of infected people can be explained by the fact that we carry out an extremely large number of laboratory diagnostic tests,” said Christian Drosten, who heads the Institute of Virology at Berlin's Charite University Hospital.

“Estimates from the last days show that we are carrying out half a million tests a week,” he added.

READ ALSO: 'The mortality rate is puzzling': Why does Germany have a lower coronavirus death rate

Drosten also highlighted Germany's dense network of laboratories spread across its territory as a factor contributing to early detection.

Meanwhile the research ministry said it would commit €150 million to improve communication between hospitals and laboratories about coronavirus patients' health data, hoping the information exchange could feed into development of a vaccine.

It comes as the total number of reported infections in Germany grew to more than 38,530 on Thursday morning, March 26th, according to data from Johns Hopkins University and Robert Koch Institute. The number of deaths grew to 213.

The actual number of COVID-19 cases is thought to be far higher. Depending on an individual state's policies, many other possible cases may not have been tested because they show only mild symptoms or have not been in contact with a known case.

Besides the large-scale testing, experts in Germany also said that the virus has largely affected a younger, healthier section of the population compared to elsewhere.

At the same time, experts have repeatedly warned that in the country where almost a quarter of the population is over 60, the number of deaths could still skyrocket if people do not stick to measures to help halt contagion.

Lockdown measures are in place across Germany, preventing people from leaving their homes except for essential trips, while most shops, restaurants and bars are closed.

'The virus has no nationality'

It came as German President Frank-Walter Steinmeier on Thursday called for European nations to show more solidarity as they face the growing pandemic.

In a video posted on social media, Steinmeier said: “We must look beyond the next border fence.

“The virus has no nationality, and suffering does not stop at borders.”

The President also praised German hospitals for their solidarity to other countries and treating Italian and French patients.