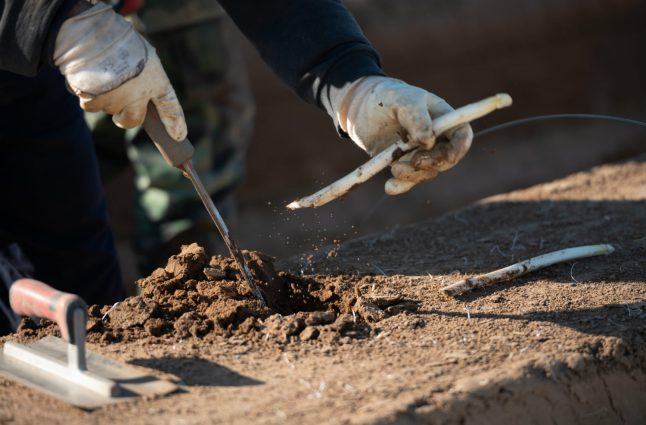 But this year, the cherished vegetable may be a rare sight on dining tables as many of the foreign seasonal workers who would usually harvest the crop are unable to enter the country because of travel bans imposed over the coronavirus.

“The situation is very tense for us farmers,” says Thomas Syring, who runs a farm in Beelitz, a town in the state of Brandenburg known for its cultivation of white asparagus.

Syring is just one of hundreds of farmers faced with the threat that his crops may be left rotting in the fields because of a serious shortage of workers.

With warmer weather looming, farmers across Europe are scrambling for ways to fill the manpower gap as travel restrictions imposed to halt COVID-19 contagion toughen.

During a normal season, Syring's farm employs about 60 workers from Romania, Poland and Bulgaria. At present, only 10 have arrived.

“At the moment it is cold again, it will slow down the growth of the asparagus. But in a week, at the latest, the asparagus will come out of the ground and continue to grow,” he warns at his farm, where rows upon rows of asparagus are waiting beneath sheets of white plastic to keep the soil warm.

Jürgen Jakob of Beelitzer Spargel, an association for asparagus farmers in Beelitz, says only half of the 5,000 seasonal workers required in the region have arrived so far this year.

“There is a need for quick clarification on how workers from Romania and Poland in particular can enter Germany,” says Udo Hemmerling, general secretary of the German Farmers' Association.

Around 300,000 seasonal workers come to Germany each year, mainly from Poland and Romania, to help with fruit and vegetable harvests, according to Hemmerling.

In Austria, which is facing a manpower shortage of 5,000 to help in fruit and vegetable farms, the ministry has set up a website to get people in other sectors to sign up and help. And in Switzerland, fears are growing that only a fraction of the 33,000 seasonal workers required annually will be available this year.

She has suggested filling some of the vacancies with workers who have suddenly found themselves unemployed because of the coronavirus crisis.

Measures agreed by the cabinet on Monday to help farmers include allowing the workers that are available to work for longer, and easing red tape around hiring temporary workers from other sectors.

But the farmers still prefer to bring in experienced farmhands from abroad.

With land transit routes blocked, some have resorted to flying workers in on chartered flights, but even though they have valid work permits, some are still not being allowed in.

Others are offering better deals to entice workers.

“For asparagus, our partners are offering to double salaries, as well as very good conditions on accommodation and catering to assure workers that they won't need to go out,” says Emese Molnar, who runs a Romanian company that sends seasonal workers to countries including Germany and the Netherlands.

But beyond border barriers, some are simply worried about travelling.

“If they're too afraid to leave their home, how can they go abroad?” asked Simona, a Romanian seasonal labour agent.

“We are now very close to the asparagus harvest, but if we do not have enough harvest workers, we will not be able to harvest the whole crop,” he warns.

Bringing in workers from other sectors won't solve the problem because of the time it takes to train them.

“Perhaps they will have learned how to do it by the end of the asparagus season, but that doesn't help us very much,” Jakob says.

By Tobias Schwarz with Femke Colburn in Berlin