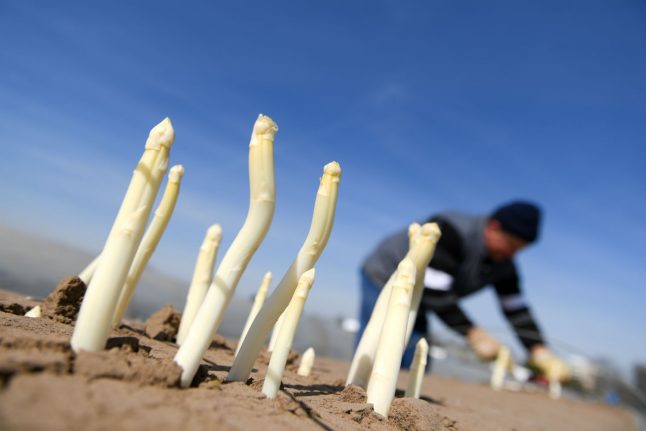 A seasonal worker helps with the asparagus harvest in Weiterstadt, Hesse on March 20th, 2019. Photo: DPA

“Seasonal and harvest workers will no longer be allowed to enter Germany within the framework of our border controls,” a spokesman for the interior ministry told a Berlin press conference.

The ban will apply from 5pm and will be in place “until further notice”, he said, and includes people from EU countries.

Around 300,000 seasonal workers come to Germany each year, mainly from Poland and Romania, to help with harvesting crops such as asparagus and strawberries.

Farmers have already raised the alarm about workers being turned away at the border as European nations slam shut their frontiers in a bid to slow the spread of the virus.

Juergen Jakob of Beelitzer Spargel, an association for asparagus farmers in the state of Brandenburg, told AFP only half of the 5,000 seasonal workers required in the region have arrived so far this year.

“We are now very close to the asparagus harvest, but if we do not have enough harvest workers, we will not be able to harvest the whole crop,” he said.

Agriculture Minister Julia Kloeckner has suggested filling some of the vacancies with workers who have suddenly found themselves unemployed because of the coronavirus crisis.

Measures agreed by the cabinet on Monday to help farmers include allowing the workers that are available to work for longer, and easing red tape around hiring temporary workers from other sectors.

In France, where farms are also in urgent need of labourers, the government has appealed for people laid off amid the coronavirus lockdown to join “France's great agricultural army”.