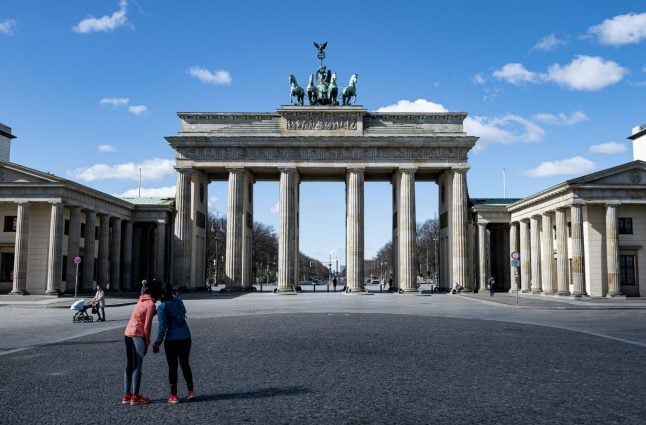 Two joggers next to the Berlin Brandenburg Gate on Sunday. Photo: DPA

But as Germany is a federal country, the measures, which will last initially for two weeks, can vary between individual states.

There had been rumours over the weekend that Berlin would introduce a full lockdown, like that seen in other German states including Bavaria and Saarland, as well as neighbouring countries like France, Italy and Spain.

Although there is no mention of a “curfew” or lockdown in the regulations announced by the Berlin Senate on Sunday, there are strict rules on when residents can leave their homes.

Plus, people have to carry ID on them when they go outside and could face a fine from police if they're outside with no good reason.

Here's what you should know about the rules.

From now on, people in Germany must “reduce contact with other people outside their own homes to an absolutely necessary minimum”, according to restrictions agreed by the federal government and states.

The new measures include a ban on gatherings of more than two people in public (excluding families) and a minimum distance of at least 1.5 metres must be maintained from others where possible.

It follows the closure of schools, daycare centres and non-essential shops in the last weeks.

In Berlin the local government is largely endorsing the Germany-wide recommendations, but is expressively ordering people to stay at home as much as possible.

The so-called “contact restrictions” (Kontaktbeschränkungen) stipulate that all residents in Berlin must stay “permanently in their flat or usual accommodation” and only leave the house for essential activities such as shopping for food, helping a sick relative or exercise.

Other activities are permitted such as working in an allotment garden, walking the dog or making necessary appointments with authorities.

The regulations in Berlin come into force on Monday March 23rd and last initially until April 5th.

Berlin mayor Michael Müller was keen to point out that “social life must be possible and children have to get some fresh air”. The goal, however, is to reduce social contact in the population to stall the spread of COVID-19.

“We will continually evaluate the current situation,” said Müller.

Do I have to carry ID when I leave the house?

Yes. The regulations contain an identification requirement which states: “The identity card or other official photo identification together with a document showing the person's residential address must be carried and presented to the police and the competent regulatory authorities on request.”

This could mean your personal identity card, passport or residence permit. You'd also have to bring proof of your address, such as your Anmeldung (registration) document or another official letter with your address on it.

New #COVID19 measures in #Berlin.
⚠️You also need to be carrying a document that shows your address in Berlin at all times with you! ⚠️ pic.twitter.com/89LVP4JIZI

Am I allowed to go to work?

If residents cannot work from home they are allowed to go to their place of employment.

Can I still go shopping?

People are allowed to leave their homes to get food or essential items.

Can I go jogging or do other exercise?

Yes. According to the regulations, “sports and exercise in the fresh air, alone, with members of your own household or with another person, and without any other group formation” is allowed.

So you cannot be outside with a group larger than two people.

Can I visit anyone?

Yes, in some cases. Visits to partners, the elderly and anyone who is sick or people with disabilities (and not living in a hospital or another facility where there are restrictions on visits) is allowed.

There are also exceptions for people to accompany very sick or dying people and funerals “in the immediate family circle”.

Can I still walk my dog, or work in the garden or allotment?

Yes, “activities for the care and supervision of animals” are also allowed, as is the “cultivation of horticultural or agricultural areas”.

Can I leave Berlin?

Yes. Leaving and re-entering the urban area of Berlin, “as long as it is done on a direct route from or to the apartment or usual accommodation” is still allowed.

May I continue to see a doctor?

Yes, people can continue to visit a doctor, therapist or go to hospital.

People can also take their animals to the vet and go to donate blood. People in Tempelhof field in Berlin on Sunday. Photo: DPA

Can I carry out other appointments?

The Senate says it's still okay to make urgently required appointments such as with authorities, courts, legal offices, lawyers or notaries.

What about schools, childcare and care facilities?

Residents are allowed to go to institutions to use the childcare facilities there, and to accompany or pick up youngsters who are looked after there.

Residents are also allowed to help other people who are not able to carry out personal business themselves.

What about the distance control?

Whenever you stay outside your own home, you must – as much as possible – keep a minimum distance of 1.5 metres from other people. Public transport is excluded from this if closer contact is unavoidable.

The rules state: “Whenever possible, a minimum distance of 1.5 metres must be maintained between you and other people.”

Are hairdressers still allowed to open?

No. “Personal care service industries such as hairdressers, beauty salons, massage parlours, tattoo parlours and similar establishments may not be opened to the public or offer their services,” the restrictions say. This does not apply to urgent medical treatments.

Which shops are still allowed to open?

In principle, all sales outlets must close.

However, retail outlets for food and drinks, including late night shops (known as Spätis) and pick-up and delivery services can remain open.

However, the regulation also states that “when opening, appropriate precautions must be taken to ensure hygiene, control access and avoid queues”.

Are restaurants still allowed to open?

Berlin on Saturday had already tightened measures on cafes and restaurants.

It means that restaurants and cafes now have to close (before they could stay open until 6pm) or can only offer takeaway food or drinks.

Special measures have to be put in place to avoid queues and there cannot be too many people in the venue at the same time.

What are the rules for meetings?

In principle, all public and non-public events, assemblies, meetings and gatherings are no longer permitted.

Events and gatherings in private or in families with up to 10 people are allowed only if they are necessary and there are good reasons.

“This includes in particular the accompaniment of dying persons and funeral ceremonies,” the regulation states.

What happens if I break the rules?

The new restrictions will be subject to police controls, according to authorities.

Those who violate the rules could face a fine or even imprisonment under the Infection Protection Act, according to the Berliner Zeitung.