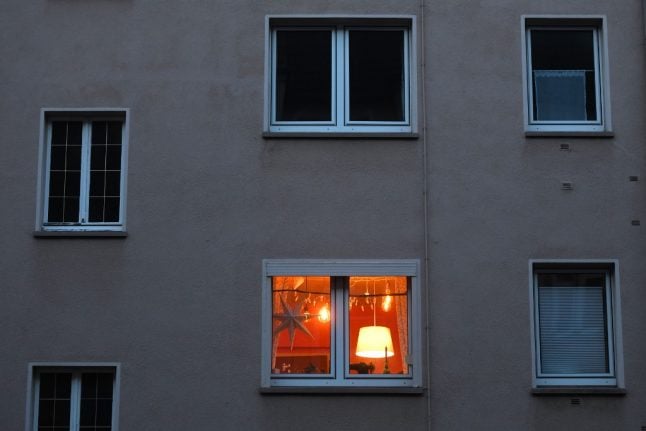 n illuminated window is seen at an apartment block in Dortmund, western Germany, on March 22, 2020 during the novel coronavirus COVID-19 pandemic. PHOTO: AFP

The public health agency the Robert Koch Institute announced on Monday morning that the number of deaths had risen from 55 on Sunday to 86 on Monday.

It warned, however, that the real number was likely much higher, in part because some regional health authorities had not submitted their figures.

Separate reports from German media put the death toll at over 100.

Germany's death toll from coronavirus is still well below that of neighbouring France, which on Sunday rose to 674, with 224 fatalities over the weekend.

In Italy, the country in Europe that is the hardest hit by the virus, there has been almost 5,500 deaths after 2,000 fatalities were reported since Friday.

READ ALSO: What explains the low death rate in Germany?

On Sunday, Germany announced new measures aimed at slowing down the spread of the virus in the hope of preventing a steep rise in the number of deaths.

German Chancellor Angela Merkel said Sunday that gatherings of more than two people – outside of family members and those living together – will be banned in public to control the spread of the novel coronavirus.

“Our own behaviour is the most effective way” of slowing the rate of infection, Merkel said of the unprecedented nationwide measures, which are initially slated to remain in force for two weeks.

The new restrictions were agreed on by Merkel and the leaders of Germany's 16 states in a telephone conference on Sunday.

“Staying in public places is only permitted alone, with another person not living in the household or with members of one's own household,” their resolution stated.

The stricter measures are intended to prevent a rapid spread of the virus so that the health care system will not be overloaded and intensive care beds in hospitals remain free for seriously ill persons infected by the virus.

According to Merkel, people in Germany are required to reduce contact with other people outside the members of their own household to an absolutely necessary minimum.

In public, wherever possible, a minimum distance of at least 1.5 metres must be maintained from people other than relatives from their own household.

A few German states, such as Bavaria, Saarland and Saxony, have announced stricter curfews in which leaving the house is only allowed for necessary tasks.