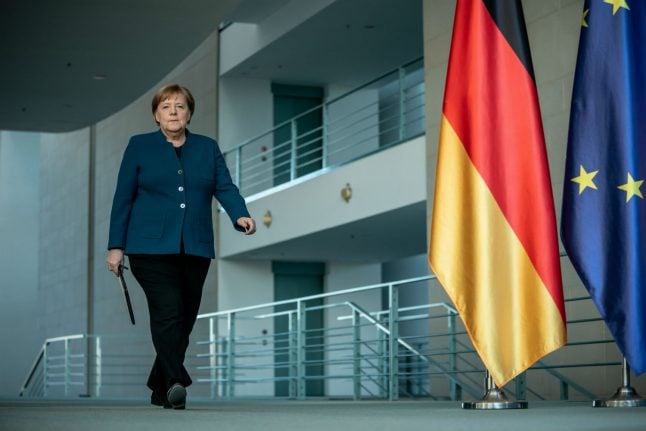 Following a press conference on Sunday, the chancellor was told that a doctor who had given her a pneumococcal vaccination on Friday afternoon has now tested positive for COVID-19.

As a result Merkel, 65, has decided to immediately go into self-isolation, a government spokesman said.

It could take some time to determine whether the chancellor is herself infected as “a test would not yet be fully conclusive,” Steffen Seibert said in a statement. She will be tested for coronavirus in the coming days.

Merkel will continue to work from home during this time.

“The chancellor has decided to quarantine herself at home. She will be tested regularly in the coming days… (and) fulfill her official business from home,” Seibert said.

In the press conference, Merkel stated that gatherings of more than two people would be banned in Germany in a bid to stem the spread of coronavirus.

During her 15-year term in office Merkel has largely enjoyed robust health, although she suffered repeated shaking spells in public appearances during a summer 2019 heatwave that were never fully explained.

In response to the tremors, she chose to sit on a chair when receiving guests with military honours outside the chancellor's office in Berlin.

Previously the veteran leader broke her pelvis in a cross-country skiing accident in 2014.

The news comes after photos of Merkel shopping in a Berlin supermarket on Friday emerged.

Chancellor #Merkel spotted doing her own shopping in her local supermarket (as she always does), she got some wine and toilet paper – no hoarding https://t.co/oaxXz053BW

Merkel was praised on social media for not panic buying.

It was not immediately clear whether Merkel will isolate herself in a rarely-used official residence in the top floor of the chancellery building or at her personal flat in Berlin's museum district.

If conservative leader Merkel were incapacitated, her role would be filled by vice-chancellor and finance minister Olaf Scholz of her junior coalition partners, the centre-left Social Democratic Party (SPD).

Scholz last week isolated himself at home with a heavy cold, but tweeted a day later that he had tested negative for the coronavirus.

Earlier Sunday, Merkel had announced still-tighter restrictions on public gatherings after a telephone conference with regional leaders that aimed to get Germany's 16 federal states into a common policy.

The closure of schools and non-essential shops had already been announced.

And restaurants will be closed across Germany except for takeaway food.

The measures slated to last initially for two weeks, will be imposed by individual states, which will decide when to roll them out.

Merkel appealed to citizens' “reason and empathy” in implementing the contact restrictions, saying she had been “very moved” by how closely people had stuck to less stringent measures implemented in recent days.

Germany's all-out support to the economy on the cabinet agenda Monday includes hundreds of billions of euros in potential support for companies and workers.

Much of it will come in the form of state guarantees for bank loans to business and easier access to short-time working and unemployment benefits.

But Berlin also plans to blow through a constitutional rule that limits the size of the federal budget deficit in any one year, with around €156 billion in new borrowing.

Ending the crisis “comes first”, Merkel has said, adding “we will see at the end of that where our budget stands”.