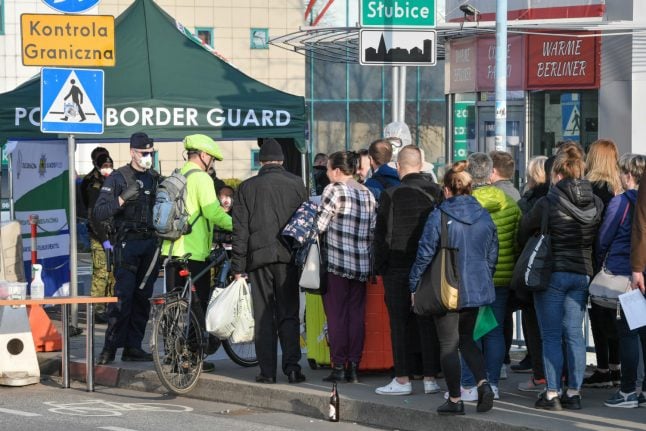 With blank stares or catching a few winks of sleep curled up on uncomfortable chairs, dozens of people have been stranded for four days on a bus locked in gigantic tailbacks at the Polish-German border due to virus restrictions.

“Our bus is on its way to our home in Ukraine. We aren't allowed to enter Poland, the border crossing is closed, and we're in panic,” passenger Alexander on the Eurolines Cologne-Kiev service told AFP.

Queues of trucks, cars and other vehicles stretched up to 60 kilometres (37 miles) back from Germany's eastern border with Poland Wednesday, with Red Cross carers on the scene to attend to people waiting up to 30 hours.

That was scant comfort to Alexander, who explained that some among the 50 passengers had been trekking 13 kilometres to buy food and toiletries rather than pay swingeing prices at the motorway service station where their bus was parked.

“We've been sleeping in this bus for four days, men, old women,” he said. “It's cold at night and during the day we have nothing to do.”

One passenger's condition had already got so bad that an ambulance had to be called, Alexander added, while others among the group had given up on waiting and made their own way back from the border.

“Our parents, our wives, our children are waiting for us at home,” the passenger said. “Please, help us.”'Waiting for help' The EU sealed its external borders to incoming travellers Wednesday to try to slow the spread of the coronavirus pandemic, as the death toll of over 3,400 on the continent overtook that in Asia.

But within the bloc frontier closures have been more piecemeal.

On Tuesday, German chancellor Angela Merkel reiterated that “the free flow of goods must be guaranteed” between EU nations to avoid yet worse economic consequences than those already visible on the horizon.

But the free movement of people around the EU – one of the “four freedoms” at the heart of its single market – has largely fallen victim to the new wave of border closures.

Within two days of Germany closing its land borders Monday, federal police reported turning back 21,000 travellers who had sought to enter.

Many states are carrying out spot checks for potential virus infections on those looking to enter their territory.

“The Polish border guards checked all of our temperatures, everyone was healthy, no-one sick,” bus passenger Alexander said.

“I don't see any problem with us being allowed to return to our homeland,” he added. “Our travel company is doing nothing, our diplomats are doing nothing. We're waiting for help.”

By Odd Andersen with Tom Barfield in Frankfurt