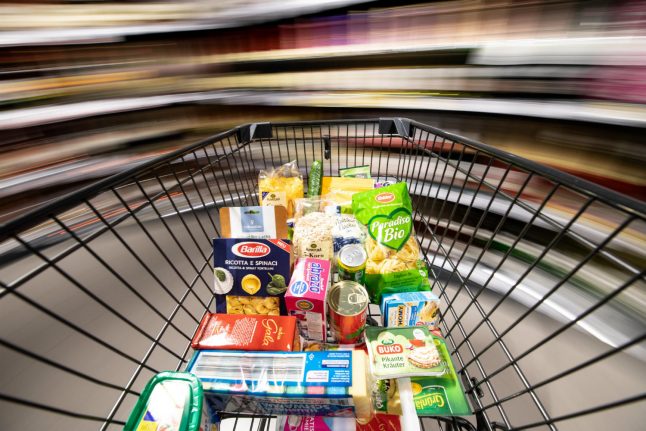 It’s a common phenomenon now in Germany: some customers clear out several supermarket shelves, and others arrive later, wishing they had showed up sooner for that last box of pasta.

Germany consumer organizations and retaillers have criticized this so-called Hamsterkäufe, or panic buying, which Germans have also done en masse for toilet paper and hand sanitizer. Shelves at a German supermarket on Monday following a 'Hamsterkauf'. Photo: DPA

The country does not need to worry about the food supply running out, Klaus Müller, head of the Federal Association of German Consumers (vzbv), told dpa on Tuesday.

“There are currently no signs of supply bottlenecks and therefore no reason for panic or make a Hamsterkauf,” said Müller.

A spokesperson for supermarket chain REWE in Cologne added that dried food – especially noodles, rice and conservatives – was being quickly bought up. Yet manufacturers have continued to deliver regularly and the shelves were quickly refilled.

The spokesperson appealed to people to “spread out shopping over the week, and not just shop on Friday afternoon and Saturday morning. That way, employees would also have a chance to replenish shelves quickly enough”.

Some supermarkets limit the sale of certain products – such as hand sanitizer – to normal household quantities, usually three bottles per shopper.

“We are working together with the discounters and supermarkets to ensure that we have enough supplies even in more difficult situations,” Federal Food Minister Julia Klöckner (CSU) told Germany’s Tagesschau last week. She added that there were plans in place in case the situation worsened.

Ironically, panic buying could trigger the phenomenon that people fear most, at least momentarily, said Müller.

In the current situation, many people are “lacking in solidarity, which could increase uncertainty among the population and in some cases actually lead to temporary bottlenecks in the availability of food or medically necessary products in retail outlets”.

At the same time, with “the requirement to minimise social contact,” Müller said he understands why consumers would do a lot of shopping at once rather than make several smaller trips to the supermarket.

“Germany is well supplied with domestic food, so panic buying isn’t necessary,” the Farmers’ Association emphasised.” Basic foodstuffs such as grain, potatoes, fruit and vegetables will continue to be available in sufficient quantities, they said.

They added that feed supply for animals was also secured, so that meat, sausage or milk would also continue to be on the shelves.

Food will also continue to be allowed to be imported into the country. While Germany has closed its borders with five countries, an exception is being made for cargo trucks carrying necessary goods. A truck outside of REWE in Cologne on early Monday morning. The supermarkets are continually restocked. Photo: DPA

According to Marcus Schwenke, Managing Director of the Foodservice Wholesale Association, more people are cooking and eating at home again – this is ensuring high turnover in supermarkets.

In an otherwise struggling economy, supermarket chains such REWE and Edeka currently searching for employees to keep up with the increased demand.

Delivery services such as Lieferando are also benefitting from the current situation. However, they are taking security measures: to reduce the risk of infection, delivery couriers only leave ordered food at the front door.

According to Schwenke, the “losers of the coronavirus” include restaurants and canteens, which as of Tuesday are also required to close their doors at 6pm every evening.

There are also concerns that the coronavirus pandemic could take a toll on some sectors of the agricultural industry.

Ahead of Germany’s renown asparagus season (Spargelsaison), many farmers in Germany are threatened by a shortage of harvest workers. Because of newly closed borders, it is currently not possible to find the workers the industry usually relies on from Poland and other eastern European countries.

“We are running into a threatening situation”, said Ulrich Löhr, the Vice President of the agricultural association Landvolks in Lower Saxony. “Parts of the harvest may have to stay in the fields.”

The Association of Southern German Asparagus and Strawberry Growers also fears bottlenecks in the coming harvest, for which more than 180,000 seasonal workers are needed. Many Poles stayed at home this year for fear of contracting an infection.

The Schleswig-Holstein Chamber of Agriculture said that the closed border with Poland was causing particular concern, as many farms employ workers from eastern Europe.

There are also fears in Rhineland-Palatinate and Baden-Württemberg that far too few workers will be around to help this year.