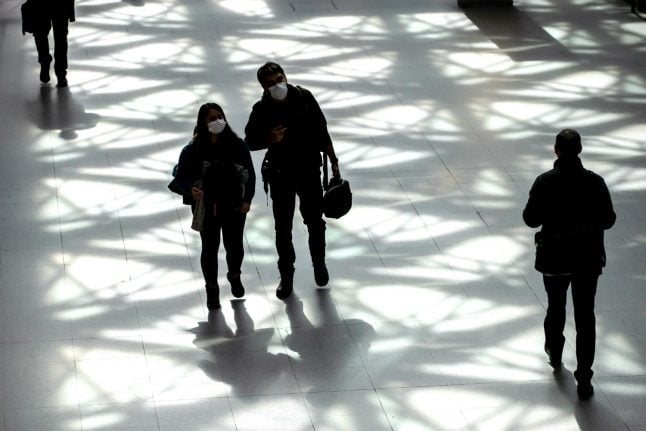 “As of today, it can be considered high,” said Robert Koch Institute director Lothar Wieler at a press conference.

It came as Friedrich Merz, one of the candidates vying to take over as chairman of Chancellor Angela Merkel's Christian Democratic Union (CDU), said he had contracted coronavirus, reported German daily Welt.

“A corona test carried out on me on Sunday was positive,” said the 64-year-old former Union faction leader.

“I will be under quarantine at home until the end of next week.”

Merz said he had “mild to moderate symptoms”. He confirmed all of his appointments had been cancelled.

“I am strictly following the instructions of the health department,” he added.

Merz is considered one of three promising candidates to succeed the outgoing CDU chairwoman Annegret Kramp-Karrenbauer, making him a possible future candidate for chancellor.

A party conference originally planned for April 25th to elect the new chairman has been postponed by the CDU due to the coronavirus pandemic.

Due to the rising number of cases, it is becoming harder to trace the “infection chain”, or the source from which a person became infected in the first place, said Wieler.

He added that hospitals need to quickly prepare for a growing number of seriously ill patients. “We expect all hospitals to at least double their intensive care capacities,” said Wieler.

However, the risk varies from region to region and can also be “very high” in some regions, such as the district of Heinsberg in North Rhine-Westphalia.

So far, the health risk in Germany from the coronavirus had been classified as overall “moderate”.

In the morning, Foreign Minister Heiko Maas announced that the country would take action to bring back thousands of German tourists who are currently stranded, and warned against travel.

Germany will make €50 million available to repatriate citizens who are stuck abroad due to travel restrictions imposed during the coronavirus pandemic.

A special 'airlift' operation has been set up with commercial flight providers to bring back German tourists from particularly affected areas in the coming days.

These include Morocco, the Dominican Republic, the Philippines, Egypt and the Maldives. Operators are to provide flights in cooperation with the Federal Foreign Office.

All those affected are urged to consult the Foreign Office's website and contact their tour operators. Embassies and consulates should also help those abroad.

It came as the German government issued a formal warning against holiday travel abroad. Maas also urged people in Germany to cancel all upcoming trips and “stay at home”.

“Beyond that, we must prevent more German travellers from becoming stranded abroad,” he said.

“For this reason we have decided to warn against all tourist trips abroad from now on. Please stay at home. It will help you and others.”

Maas said the warning against travel applies worldwide and said disruption to air traffic was far from over.

As the global coronavirus crisis deepens, many countries have closed borders and cancelled flights due to the rapid spread of the virus. Since Germany is now one of the main high risk countries, German travellers are particularly affected by restrictions.

German shut down on public life

It came after the government announced extreme measures aimed at stalling the spread of coronavirus.

From Tuesday, all non-essential shops and other facilities should be closed, while restaurants and cafes will have limited opening hours.

People have been urged to stay at home and avoid unnecessary social contact.

On Monday, Chancellor Angela Merkel also warned people in Germany against holidaying, either at home or abroad.

During a press conference she urged people to follow the new rules. She said: “There have never been measures like this in our country before. They are far-reaching, but at the moment they are necessary.”

Germany has recorded around 7,200 coronavirus cases and 17 deaths as of Tuesday morning.

There will still be a “considerable number of new infections” during this period, Altmaier added. “Therefore, I would not advise anyone to bank on this being over in eight days.”

He said financial support and guarantees to those struggling needed to be provided as soon as possible.

“We don't have weeks, we have days to get it all done,” he said.

It came as German auto giant Volkswagen on Tuesday said the group was preparing to shutter most of its European plants as the coronavirus pandemic disrupts supply chains and sends demand plummeting.

“Production will be halted at our Spanish plants, Setubal in Portugal, Bratislava in Slovakia and the Lamborghini and Ducati plants in Italy before the end of this week,” CEO Herbert Diess said.

“Most of the other German and European plants will begin preparing to suspend production, probably for two to three weeks.”