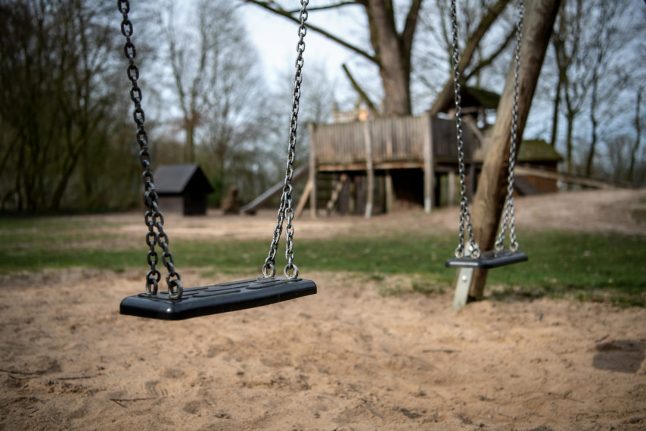 Germany has announced a closure of kids' playgrounds like this one in Hamburg. Photo: DPA

– The number of confirmed coronavirus cases are continuing to soar

– The federal government, along with Germany’s 16 states, agreed on new, far-reaching measures in the hope of slowing down the spread.

– The RKI has urged people to refrain from “corona parties” in their homes in light of closed bars and clubs.

German Chancellor Angela Merkel has appealed to the public for their understanding and to follow the new regulations.

“There have never been measures like this in our country before,” she said on Monday. “They are far-reaching, but at the moment they are necessary.”

She added that the federal states and local authorities were responsible for implementation.

“Reducing social contact” is the most effective way to contain the spread of coronavirus, said Merkel.

“The more individuals stick to these rules, the faster we will get through this crisis,” the chancellor said.

Please note that there might be some differences to the regulations depending on the state where you live.

– All opera and theatre houses, concert halls and philharmonic halls

– Restaurants and cafes can stay open but they will have to shut daily by 6pm. The earliest they can open is 6am. They should introduce distance regulations for the tables or, for example, limit the number of guests.

Here’s what will stay open. The government is also considering opening some of the following facilities on Sundays.

– Retail and wholesale establishments for food

Gatherings in churches, mosques, synagogues and other religious communities, including services will also not be allowed under the plans.

Hotels not for tourists

Germany has also agreed to restrictions on tourism in a bid to curb the spread of coronavirus.

Under the new rules, hotels will be closed off to tourists. Hotels will only be used for “essential and explicitly not for tourist purposes”, the government added.

The federal and state governments also want to close playgrounds in a bid to stop the spread. When asked by a reporter in the press conference how this could be implemented, Merkel said there would be checks, but urged residents to follow the rules to support the health system at this difficult time.

She said that because schools have been closed in order to avoid contact between children, it did not make sense to have the same sort of interactions on playgrounds.

For hospitals, nursing homes and rehab facilities, there are to be visiting regulations, such as people only being able to have visitors once a day. Younger people under 16 years of age will not be allowed to visit. What are people in Germany being asked to do?

As well as washing hands and avoiding hand shakes, authorities have urged people to stay at home as much as possible and avoid gatherings or crowds.

“We have to work together to ensure the virus spreads as slowly as possible,” said Steinmeier in a statement.

“So wherever possible: stay at home! Avoid close contact… and have understanding for all restrictive measures.”

Meanwhile, the Robert Koch Institute is urging people not to get together for “corona parties” now that clubs and pubs are shut.

“Instead of going to a club, it makes no sense to invite people to your home for a big party or to go to other parties where lots of people meet,” said RKI Vice President Lars Schaade.

“I say this because it seems there are already so-called corona parties now the clubs are closed,” Schaade said.

“Please don't do that. Stay at home if possible.”

What else is closed?

All schools and nurseries are closed until after the Easter holidays which finish on April 20th.

Many public buildings have also shut their doors for now, while lots of workplaces have urged employees to work from home. A school in Munich put a closure notification on its door. Photo: DPA

What else are Germany's states doing?

On Monday Bavaria declared a 'disaster' situation to allow the state’s authorities to push through new restrictions faster, including possibly asking the German Armed Forces (Bundeswehr) for assistance.

State premier Markus Söder announced the new status and restrictions on Monday. He described them as “drastic” but said social contact must be limited as much as possible in a bid to stop the spread of the virus.

“The situation is very serious and changes daily, unfortunately not for the better,” said Söder.

Other parts of Germany, including Berlin and Cologne, already imposed strict restrictions on public life at the weekend.

As Germany is a federal country, closures on local facilities are usually ordered by the state.

For the nationwide partial shut-down, the federal government agreed the measures with the states. Merkel said it was important to have a “uniform approach”  when trying to limit social contact in the fight against coronavirus spread

What about travel and transport?

Merkel on Monday made clear that all non-essential travel should stop when she urged Germans to cancel their holidays at home or abroad.

EU Commission President Ursula von der Leyen also proposed a 30-day ban on entering the European Union. This was the best way to limit the spread of the coronavirus, said von der Leyen in Brussels on Monday afternoon.
Germany had also begun strict border controls on Monday at the crossings to Austria, France, Luxembourg, Denmark and Switzerland. Goods traffic and cross-border commuters are not affected.
READ ALSO: Drivers turned back as Germany partially closes borders to fight coronavirus

The crisis is also hitting travellers and the tourism industry with full force before what's normally the busy beginning of the spring travel season. Several tour operators, including German industry leader TUI, cancelled tours, and some airlines are suspending operations for the time being.

The federal and state governments decided that overnight stays in Germany should only be used for necessary purposes. German holiday islands in the north of the country are also now closed.
Deutsche Bahn will also be restricting its regional transport Germany-wide to an “Emergency Plan” starting on Tuesday. Cross-border routes have already been taken off the timeline, and there will be no more ticket controllers.

The move was made to accommodate the large number of DB employees who need to stay home with their children, and due to the reduced number of customers.