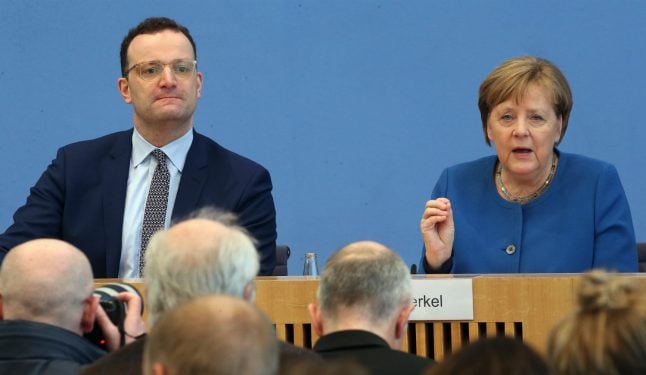 During a press conference held on Wednesday, Merkel called on citizens to show solidarity in the face of the corona crisis.

When it comes to protecting vulnerable people, including the elderly or those with underlying illnesses, Merkel said: “Our solidarity, our sensibility, our hearts are already being put to the test, and I hope that we will pass this test.”

Merkel said the main task was to stem the spread of coronavirus.

“The virus has arrived in Europe, it's there, we must all understand that,” said the chancellor.

There is still no vaccine, she said. “According to experts, 60 to 70 percent of the population could be infected if this remains the case,” said Merkel.

The central issue is now to “not overload our health system” so that it doesn't become burdened with too many cases at once, said Merkel.

She said no action taken to prevent the spread was in vain. “It is not for nothing”, she said. “It's all about buying time.”

She noted that every European country was affected and sent thoughts to Italy, the worst affected country in Europe.

“We sincerely hope that the tough measures taken there will bring about a turn for the better,” she said.

Meanwhile, President of the Robert Koch Institute Lothar Wieler confirmed that Germany is only at the beginning of the epidemic.

With three deaths and the number of infections pushing close to 1,300, Merkel's government has called for the cancellation of large events with more than 1,000 people.

Bundesliga clubs are playing to empty stadiums while key events on the business calendar like the Berlin ITB travel fair or the Hannover Messe industrial show have all been shuttered.

Classical concerts and operas in the capital are also hit, as curtains stay down for cultural events gathering more than 500 spectators.

In a bid to cushion the blow on workers forced to cut work hours because of crashing demand and production bottlenecks, the government is pushing through rules to ease compensation regulations for affected employees.

The relaxed criteria will apply from April and will be valid up to the end of the year.

Merkel called for coordinated action by the federal, state and local governments in response to cancellations of major events. Health Minister Jens Spahn said that there would be further restrictions on everyday life in the coming weeks and months.

A meeting with the states with regard to crisis management is to take place on Thursday.

German government will do what's needed

Merkel also said that the government is not ruling out suspending a self-imposed dogma of keeping Germany's budget balanced in the fight against the coronavirus outbreak.

“It is an extraordinary situation, we will do what's necessary and luckily Germany is relatively robust… we see at the end of that where our budget stands,” she said, stressing that ending the virus crisis “comes first”.

Maintaining a balanced or “black zero” budget has been a key campaign selling point of Merkel's government, which believes that it would be irresponsible for the fast ageing nation to incur more debt that would be left to a shrinking workforce to service.

But with the coronavirus outbreak forcing some countries to shut borders, companies to keep workforces home and as foreign orders collapse, calls have grown for Merkel's government to help prop up Germany's economy.

“An economy like Germany's, which is extremely export dependent, is of course harder hit by global challenges than one that is very concentrated on” its domestic demand, acknowledged Merkel, saying that the government will announce liquidity help for firms.

Underlining the need to throw all resources at stemming contagion, the German chancellor also said the government will look the other way if severely hit countries like Italy were to flout the EU's rules on limiting public deficit as it fights the virus.

“On the European level regarding the stability and growth pact, we will be flexible. That was an important conclusion yesterday.”

Merkel's press conference on Wednesday marked her first outing before the press on COVID-19 and comes as Germany's biggest daily Bild accused her on its front page of failing to take charge in the crisis.

The German leader shrugged off the criticism, saying that Health Minister Spahn “is aware” of her involvement from the start.