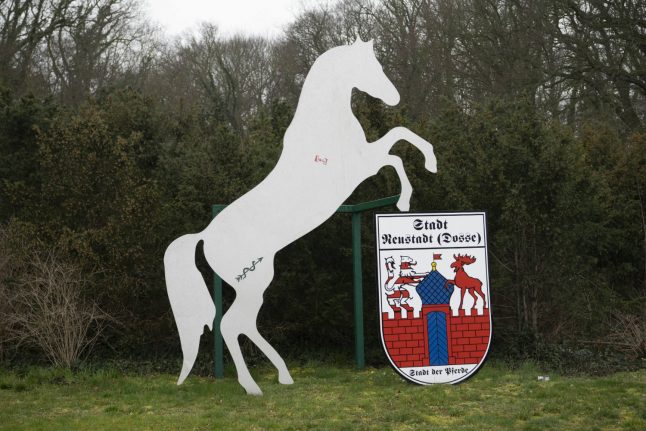 In the town of Neustadt -Dosse in Brandenburg has been affected by the coronavirus outbreak. Photo: DPA

The Prinz von Homburg school, a daycare centre and two equestrian boarding schools have been closed since Monday to halt the spread of the coronavirus in Neustadt-Dosse, about a 90-minute drive from Berlin.

The town, in the northern state of Brandenburg, is a hub for horse riding and the Prinz von Homburg school even offers riding lessons as part of its curriculum, but the clatter of hooves could not be heard there on Tuesday.

Instead, rows of empty chairs lined the classrooms.

For the latest on the coronavirus situation in Germany click here.

At the nearby daycare, the windows were lined with colourful paper cut-outs of balloons, suns and butterflies, but behind them the rooms were dark and empty.

Teachers at the schools were among 19 people who took part in a meeting with a horse breeder from Berlin, who later tested positive for the virus.

All students and teachers, as well as their immediate family members, have been called on to stay at home until the end of the incubation period on March 17th.

READ ALSO: Coronavirus: What restrictions are there on daily life in Germany?

'Something should have happened sooner'

In a statement, local authorities said that a “maximum of 2,250 people” would be affected by the quarantine.

That number included people from “several areas in Brandenburg and other federal states”, they added.

Neustadt-Dosse itself has only 3,400 inhabitants. The Prinz von Homburg school in Neustadt-Dosse with a closure notice. Photo: DPA

Mother Nicole Lasch, who cares for her parents-in-law and works as a cleaner in the evenings, is affected by the quarantine because two of her children go to the Prinz von Homburg school.

“Something should have happened a lot sooner,” she tells AFP. “The children have carried on going to school for a week now, even longer.”

Lasch is observing the quarantine as best she can, but still has to pay regular visits to her parents-in-law as they are unable to care for themselves. Others may not be so diligent.

The decision to close the school and implement the quarantine was taken in consultation with the local health authorities, says senior local official Dieter Fuchs.

He trusts the people of Neustadt-Dosse to take a sensible approach.

“They know what coronavirus means, what effect it can have and the particularly endangered groups.”

Lasch, for her part, is not too worried. “We could all catch it one way or another,” she says.