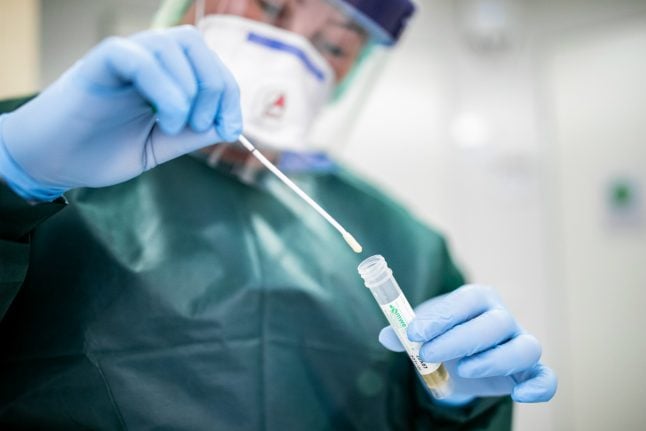 An employee in protective clothing at the infection ward in the University Hospital Essen. Photo: DPA

Across Germany the number of people confirmed to have coronavirus (also referred to as COVID-19 and Sars-CoV-2) has topped 1,000. But the state with the highest amount of cases is North Rhine-Westphalia (NRW) in the west of the country. As of Monday morning, there were 515 confirmed cases in the state.

Meanwhile, the first two deaths in Germany due to coronavirus were reported in the city of Essen and district of Heinsberg, both in NRW, on Monday.

The state of Bavaria, where the first coronavirus case in Germany was detected on January 27th follows with around 256 cases, and then Baden-Württemberg with just under 200.

Why are there so many cases in NRW?

With nearly 18 million residents, NRW is the most populous state in Germany so it’s perhaps not a huge surprise that these are where the highest numbers are.

However, it is spreading quickly in the region, particularly in the district of Heinsberg where a couple unknowingly infected with coronavirus celebrated carnival in February.

The 47-year-old businessman from the municipality of Gangelt in the Heinsberg district, and his 46-year-old wife, were on February 25th confirmed to be the first cases in NRW.

According to reports, the man is in a critical condition in hospital and the woman is in a less serious condition.

It’s unclear how the couple picked up coronavirus, but authorities were examining the man’s business contacts to see if the virus had spread that way.

The couple had celebrated carnival before they knew they were ill and this meant they had come into contact with a lot of people.

Meanwhile, the woman works as a nursery teacher so her colleagues, pupils and their parents had to self-quarantine.

How have authorities in NRW been trying to contain the outbreak?

The district of Heinsberg has become something of a case study in Germany for how the country can handle potentially deadly outbreaks.

After the couple were confirmed to have the virus, a public appeal was made to visitors who attended a carnival celebration in Gangelt in mid-February.

This event is said to be the origin of the large number of coronavirus cases in the state. Those who came forward were asked to self-quarantine and many were tested.

The district estimated that 1,000 people were in domestic quarantine after the first case was confirmed. That included people who had come into contact with the couple as well as their close friends and family

Meanwhile, the number of people who have tested positive for the virus has grown in the state hugely in less than two weeks.

There were around 292 confirmed cases in Heinsberg alone as of Monday, with eight patients in hospital because of the virus. A sign for the community where many of the coronavirus cases in Germany are linked to. Photo: DPA

In this area, the westernmost district of Germany, where about 250,000 people live, a crisis team of about 100 people is fighting against the spread of the novel virus.

Schools and Kindergartens in the district are closed for the time being as a precaution. All district authorities and courts are also closed to the public.

Heinsberg district councillor Stephan Pusch pointed out in an interview with broadcaster N-TV that the increase in cases is also likely down to the fact that more people are being tested.

“Although the number of cases is increasing in our district, we are also continuing to expand our testing capacities – and this naturally increases the probability that more tests will result in more positive cases,” he said.

In several other communities across NRW, schools are currently closed due to factors such as pupils or teachers testing positive for the virus.

In Cologne and Düsseldorf, firefighters are also affected. Both cities emphasised, however, that operations in their stations had not been hit, although several affected people are in domestic quarantine.

What’s the reaction from locals?

Heinsberg administrator Pusch has paid tribute to communities affected by the outbreak saying there is a “huge wave of solidarity” despite school closures which puts a lot of pressure on parents.

“I have to pay a huge compliment to the citizens,” he said. “There is a ‘we can do this’ mentality and a lot of neighbourly help.

“That is really extraordinary. In a crisis like this, a great wave of solidarity and a sense of community has swept over us. “People are very understanding of what we are doing, even though a lot of people have been in quarantine. Of course, this puts a damper on their spirits.”

Meanwhile, residents have been on social media to offer support to each other and T-shirts with the hashtag #HSbestrong (Heinsberg be strong) are being sold with donations going to charity.

Although business is continuing in Heinsberg to some extent and counsellor Pusch has urged people not to panic, there are changes to daily life.

Many people are staying at home in voluntary quarantine, even if they are healthy, and there is less traffic on the roads.

Shops are not very busy, cafes are operating on reduced hours and some gyms have shut their doors.

According to local reports, new parents at the hospital in Heinsberg are having their temperatures taken in some cases, or being asked how they are feeling, before they can see their newborn babies.

Pusch is also regularly sharing videos with residents on social media letting them know the latest updates in a bid to be transparent.

Will parts of NRW – or other places in Germany – be put on lockdown?

In one of the videos that Pusch uploaded on Facebook, he ruled out plans for restricted areas, like what's happened in Italy.

Pusch said: “As long as I'm in charge, nothing will be sealed off here.”

When asked why that action wouldn't be taken he said: “That’s not the kind of approach you can convey to the people of Germany. Besides, you can’t control it.”

Authorities at a wider level seem to be keen to avoid this too, but it’s not being ruled out.

Sealing off entire towns or villages if they become affected by the virus “would be a last resort”, Interior Minister Horst Seehofer said last week.

Of the confirmed coronavirus cases across Germany, so far most of the identified infections are said to be mild. This could go some way to explain why there have been few deaths in Germany compared to elsewhere in Europe.

Most people have mild cold symptoms with shivering and sore throat, or no symptoms at all. A total of 15 out of every 100 infected people fall seriously ill, according to the Robert Koch Institute. A sign at a store in Lower Saxony says disinfection bottles will be limited to three per customer. Photo: DPA

What else is Germany doing?

In a bid to slow down the spread of the virus as much as possible, Health Minister Jens Spahn has said gatherings of more than 1,000 people should be scrapped.

“After many discussions with those responsible, I emphatically encourage the cancellation of events with more than 1,000 participants until further notice,” he wrote on Twitter.

He also appealed to individuals to “consider what is so important in your daily life that you cannot miss in the next two to three months – be it a visit to the club, a birthday party among family members or an association meeting.”

He said: “We must slow down the pace so that we are prepared for all situations. And major events naturally have the tendency for a lot of transmission.

“That's why we will now implement this advice in the states, here in North Rhine-Westphalia and elsewhere.”

Spahn's latest recommendation could lead to the postponement of many more events, including Bundesliga football matches and music concerts.

Spahn says Germany is well prepared and is continually analysing the situation in a bid to slow down the spread of the virus.

He has said that the government is updating its medical guidelines to make sure that overstretched health workers concentrate their efforts “on the most acute” cases if the outbreak worsens.

That could also mean that non-urgent surgeries would be postponed, he said.