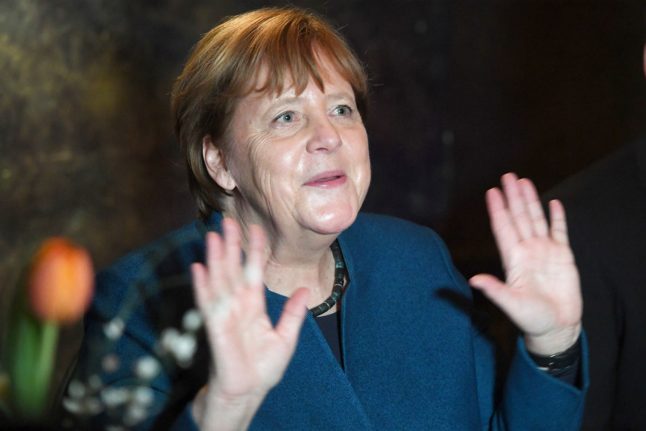 On Friday Merkel held up her hands at a reception in Stralsund to gesture that she did not want to shake anyone's hands. Photo: DPA

When Merkel reached out to greet Horst Seehofer at a meeting on migration in Berlin, he smiled and kept both his hands to himself.

They both laughed and Merkel then threw her hand up in the air before taking a seat – a gesture which the chancellor have been making over the last week.

Health experts have recommended avoiding handshakes as a way of preventing the spread of the novel coronavirus.

There are now 157 confirmed cases in Germany, Lothar Weiler of the Robert Koch Institute disease control agency said on Monday morning — up from 129 the previous day. The first infection in Berlin was also announced on late Sunday evening.

The alert level has been raised from “low to moderate” to “moderate,” Weiler said, with authorities saying there was no need for drastic measures like border closure to stem the contagion.

On Tuesday evening, Germany saw its first new cases in over a month – since the first cases emerged in Bavaria in January – and within a week grew to one of the most affected countries in Europe. The virus has now spread to 10 of Germany's 16 states, with more than half the confirmed cases in North Rhine-Westphalia.

Germany's most populous state emerged as a hotspot after an infected couple attended carnival celebrations there, infecting dozens of people.

Carmaker BMW confirmed on Monday that one of its employees in Munich has  tested positive for the virus.

Staff who have had close contact with the man have been asked to  self-quarantine for 14 days, a spokeswoman said, and affected areas have been sealed off and disinfected.

Amid growing fears over contagion, disinfectants, hand sanitisers and other protective products have sold out in many German shops.

In Lower Saxony, 1,200 protective face masks were stolen from a hospital in the town of Sulingen near Bremen, news agency DPA reported on Monday, citing local police.

The hospital reported the theft after a stock check revealed that the masks were missing from a storage room.

Germany has cancelled several major gatherings in a bid to curb the spread of the virus, including this week's ITB travel trade fair in Berlin and the smaller Berlin Travel Festival, which was scheduled to take place this upcoming weekend.

Health Mininster Jens Spahn stressed on Monday that it was too early to say whether further public events would be cancelled.

With panic setting in, security at Bundesliga football club RB Leipzig threw out a group of Japanese fans, forcing the team to apologise on Monday.

The group were removed from the stadium by security about 10 minutes into the game against Bayer Leverkusen on Sunday.

The club said its security had made a “mistake” after being asked to carry out extra checks on people from potential risk areas.