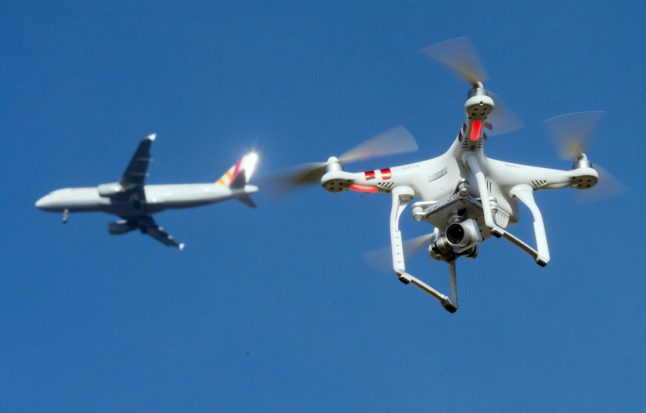 There are no clearances for take-offs and landings for the time being, the German Air Traffic Control (DFS) and Frankfurt airport announced on Twitter. Following a clearance, delays could still occur.

The drone had been sighted by a pilot in the southern area of the airport at around 11:15 am, a spokesman for Germany’s federal police said.

State and federal police are now searching for the drone, and a helicopter is also in use, reported local media.

Sightings of drones have repeatedly caused an interruption of air traffic in Germany, including at Frankfurt’s airport.

READ ALSO: 'A considerable risk': Germany plans to protect its airports from drones

Last year, the airport was the most frequently affected airport in Germany with 28 drone sightings. In February a drone sighting also paralyzed air traffic over Frankfurt for one hour.

The federal police spoke of deliberate sabotage. As in previous cases, the search for the pilots behind the drones was unsuccessful.

In Germany, drone flights are forbidden near the take-off and landing areas of airports – at least a distance of one and a half kilometres must be kept.

Drones are also not allowed to take off directly above crowds of people, hospitals, prisons, public authorities, federal roads or railway installations.