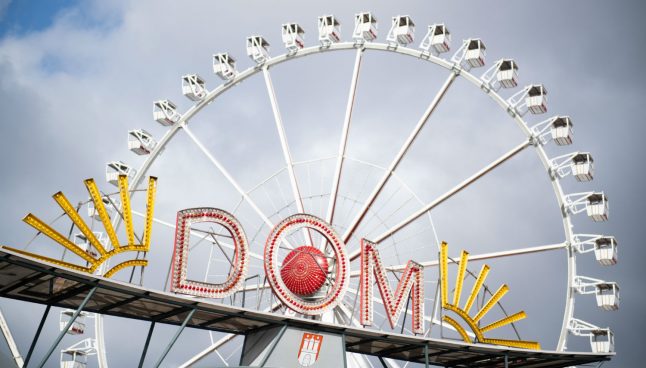 The Hamburger DOM opens back up this month. Photo: DPA. Individuals in traditional dress at ITB in 2019. Photo: DPA.

Editor's Note: As of Friday evening, February 28th, ITB Berlin has been cancelled due to coronavirus fears.

The world’s largest travel trade show, ITB Berlin, will once again be back in Berlin from March 4th-8th, with booths devoted to travel options from many different countries all across the globe.

ITB Berlin showcases the cultures and styles of a diverse range of locations, regardless if you’re looking for outdoor adventures, a gastronomic journey or a destination suitable for the whole family. This year’s official partner country is Oman. Speakers from companies such as Airbnb, TUI, Skyscanner, Google, and the World Health Organization will be there!

The lesser known Berlin Travel Festival, dedicating to exploring “what travel means today,” will also take place from March 6th-8th. The BTF has a number of other travel-focused events and talks, including a range of inspirational speakers proclaiming the merits of solo travel, sustainable travel, socially responsible travel, female travel, and much more. Individuals explore the many exhibitions at the Leipziger Buchmesse in 2019. Photo: DPA.

Almost everyone in Germany has heard of the Frankfurt Book Fair, which is one of Europe’s largest literary celebrations. But the Leipziger Buchmesse is the second-biggest in Germany and is considered to be the go-to fair for non-commercial audiences around the country looking to get a taste of the best, newest and rarest literature available.

This year there will be loads of exhibitions in locations around Leipzig. They’ll include a large line-up of children’s literature, comics, and foreign books in English and other languages. In conjunction with the book fair, there will also be a Manga Comic-Con and an Antique Book Fair in the city. The event coincides with the program “Leipzig reads,” which will include over 3,600 events across the city. A dancer prepares for a competition in Stuttgart. Photo: DPA.

Contemporary choreographers and young talent from all around the world will come to Stuttgart to perform in the 24th annual International Solo Dance Theater Festival in March. This competition involves an international jury but also public audiences. There are six competition productions shown on three evenings and then a finale with an awards ceremony.

If you are interested in contemporary dance or just appreciate great talent, this is sure to be an exciting event. The audience opinion is also important; there are separate prizes for those dancers that the public loves the most. More information is available here. In 2020 Beethoven’s 250th birthday year will be celebrated across German-speaking Europe. Beethoven’s birthplace Bonn will be celebrating this anniversary with two festivals, the first of which takes place in March. The festival will include local, regional, national, and international performances and artistic showcases that seek to capture and preserve elements of Beethoven’s life and work.

A calendar of events and tickets can be found here. Highlights include performances by both the Beethoven Orchestra Bonn, the Vocal Ensemble of Cologne Cathedral, and the Russian National Youth Symphony Orchestra. The festival also offers participants to create their own sounds with a “Beatmachines” workshop and concert after. Munich is known for Oktoberfest, but it’s not the only time that the city’s beloved beer halls open their doors to celebration. The Starkbierfest, or Strong Beer Fest, which takes place between Fasching and Lent is worth a visit! The festival runs this year from March 13th- April 5th. Each brewery hosts its own events. Here's everything you need to know.

The “stark” part of the beer actually refers to a higher concentration of dissolved starch, proteins, and sugars. Legend goes that this beer was developed by monks who were required to fast during Lent and needed a higher caloric content from the liquid; such beer is often known as “liquid bread.” Munich breweries have been following this tradition and crafting strong beers every year since the 15th century.

Although the ‘strong’ part of strong beer is not referring to alcohol content per se, these beers do tend to be stronger. It just so happens that many of the beers are upwards of 10 percent alcohol by volume. Perhaps as a result of this increased buzz, Munich’s beer halls also host good-natured roasts of political leaders throughout the festival.

If beer isn’t your thing, Munich also offers a wine tour on Saturday, March 28th and Sunday, March 29th. Tickets can be purchased online. The event takes place in Munich’s historic Old Congress Hall and brings together over 100 winemakers from all 13 wine regions in Germany. Visitors can purchase wines at special prices. A man celebrates St. Patrick's Day during a parade in Munich. Photo: DPA.

St. Patrick’s Day takes place on Tuesday, March 17th this year, but most of the German cities will be rolling out the green gear and Guinness taps during the weekend before. Most major cities have Irish pubs to mark the occasion by enjoying beers with friends.

If you’re looking for a bigger celebration, Munich and Berlin are the go-to destinations. Berlin biergarten Birgit & Bier is home to the St. Patrick's Day Festival in Berlin, which includes live performances, rugby showings, Irish dancers, bagpipers, and plenty of beer. In addition, Berlin’s famous Radio Tower will be lit in green to mark the occasion.

The St. Patrick’s Day parade and after party in Munich will involve over 1,500 participants and is the largest multicultural event in Munich. The parade is ordained by a priest after an Irish mass, and then the party continues for the entire weekend. There will be live music and dancing and plenty of traditional Irish food. Several landmarks in Munich will also have green light projections over the weekend. The largest folk festival in northern Germany has three seasons: winter, spring, and summer. The spring portion begins on March 27th and will continue until April 26th. The spring edition will showcase fair rides, carnival games, and a special fireworks show every Friday.

Over 230 different attractions make up this magical festival.Just as exciting as the carnival activities is the wide variety of food to choose from at the festival. Snack on everything from Bratwurst and Currywurst to traditional dishes, including the Schmalzkuchen, or “lard cakes,” which is similar to a donut but smaller and square-shaped.

The festival is free entry and takes place next to the famous St. Pauli Stadium. The Hamburger DOM actually has origins in the 11th century, when traders and artisans, as well as jugglers and other performers would come to the Marien-Dom, or cathedral, in Hamburg to showcase their goods. The spring festival began in 1948 and has run continuously ever since.