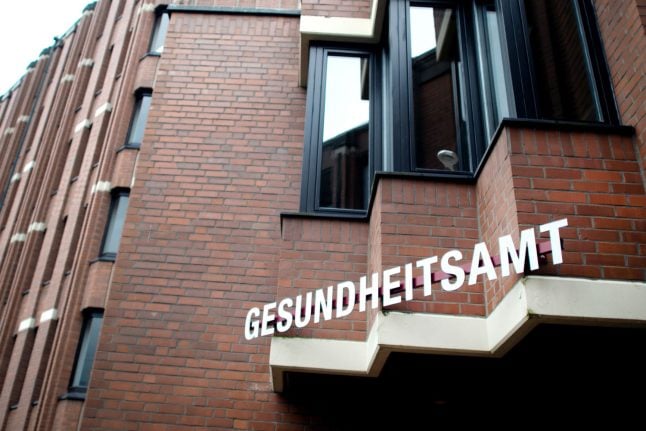 The health office in Heinsberg, where the first coronavirus case in North Rhine-Westphalia was detected. Photo: DPA

What is the current situation?

German Health Minister Jens Spahn (CDU) said at a press conference Thursday that Germany is “at the beginning of an epidemic with the coronavirus”.

So far, 26 people have been infected throughout the country. The first cases occurred in January in Bavaria, and almost all of the 16 originally infected people have since recovered.

So far, said Spahn, it has been possible to isolate both those infected – and those possibly infected – from their surrounding environment. Yet this is no longer possible.

With an influx of new cases, authorities can no longer determine which “patient zero” carried the virus into their region.

Yet “even in this new situation”, Spahn said, the authorities are trying to “protect the population as best as possible”. A sign in Heinberg, North Rhine-Westphalia on Wednesday states that kitas and schools are closed in response to a coronavirus infection. Photo: DPA

How is the federal government reacting?

The German government has set up a joint crisis team consisting of the health and interior ministries. The Federal Ministry of Health coordinates closely with the state ministries and the Robert Koch Institute, which is the leading institute in Germany in the field of disease surveillance and prevention.

Initially, state authorities, including the public health authorities, are responsible. If the situation worsens – as is currently the case – the Federal Government's crisis management team takes over.

What measures are authorities taking?

The essential regulations are laid down in the so-called Infection Protection Act, which applies throughout Germany. When it comes to stemming the spread of a disease, the first step is to take extensive control measures, for example by limiting transportation such as flights, buses or trains.

As of Thursday, air travellers from areas affected by the coronavirus must report immediately after landing in Germany and explain where they have been.

According to Spahn, this concerns China, Japan, South Korea, Iran and Italy. Appropriate “exit cards” are to ensure that all travellers can be contacted quickly if it turns out that one of the passengers was infected.

Minister of the Interior Horst Seehofer said that such exit cards should also be filled out in cross-border train and bus traffic, and asked for the voluntary commitment of transportation companies.

Events or gatherings may also be prohibited – and locals can also be forbidden from leaving a place.

This affects the approximately 300 visitors at a carnival event in Heinsberg – where the first infected man in North Rhine-Westphalia visited on February 15th. The attendees are now being called upon to report to the authorities.

READ ALSO: Just how worried should German residents be about the spread of the coronavirus?

They and their families have to go into domestic quarantine for 14 days, according to a degree which was issued by North Rhine-Westphalia's Ministry of Health.

How well prepared is Germany in terms of testing and facilities?

But some experts are skeptical whether Germany's already-strapped health care system has really grown to handle hundreds or even thousands of coronavirus cases. One core reason for concern: lack of tests for the coronavirus.

It's true that many university hospitals, research institutions such as the Bernhard Nocht Institute and also private clinic groups such as Asklepios are able to carry out such tests.

However, public health insurance companies won't foot the bill for every patient who feels ill. Rather, this only applies in the case of patients who, according to the definition of the Robert Koch Institute, belong to the risk group, have recently been to China, or show symptoms of lung disease.

Virologist Alexander Kekulé of the University Hospital Halle told Germany's Tagesschau that even all flu and severe cold cases should be treated immediately. The Düsseldorf clinic where patients in North Rhine-Westphalia are being treated. Photo: DPA

Is there enough space at hospitals?

Another point of criticism has been Germany's lack of isolation wards. If there are significantly more infections, normal rooms or wards must be converted into such specially fenced areas. Marylyn Addo, Head of Infectiology at the University Medical Center in Hamburg-Eppendorf, told the Tagesschau that this is possible without any problems. However, there are consequences.

Due to the high number of patients in winter, however, hospitals like the Charité in Berlin – where there has not yet been a reported case – are already working at 85 percent capacity.

Should a large coronavirus eruption occur, “then it will be difficult to maintain normal care,” said Christian Drosten, a virologist at the Charité told the Tagesschau.

Mathias Eberenz of the private clinic group Asklepios also emphasized to the Tagesshau that – in the event of a major outbreak – rooms or even entire areas could be rededicated to isolation areas with appropriate hygiene locks.

However, resources would then have to be reallocated, so unnecessary operations would be postponed.

It also will becomes particularly difficult if the infected person also become life-threateningly ill and has to be treated in intensive care units.

In many places, these wards are already working at their limits. If these numbers increase significantly, the capacities there will probably be quickly exhausted.

Would a major outbreak in Germany push the health care system to its limits?

According to all that is currently known about the pathogen, it behaves similarly to influenza viruses.

For this reason, experts assume that a major coronavirus outbreak would put a similar strain on the German health care system as a very severe wave of influenza.

In concrete terms, this would mean full waiting areas in doctors' surgeries and clinics.