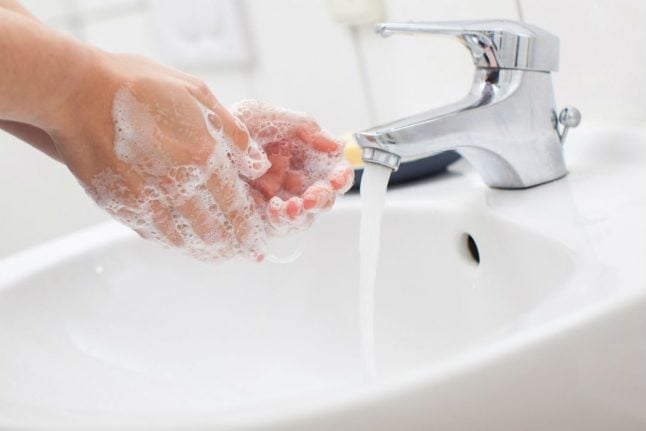 Hand washing: a protective measure against many infections, from the flu to the coronavirus. Photo: DPA

This article was last updated on Wednesday at 4:30 pm.

Could the coronavirus spread in Germany?

In view of the spread of the coronavirus in Europe and Germany, the German government sees a “new situation, according to spokesman Steffen Seibert in Berlin on Wednesday.

German Health Minister Jens Spahn (CDU) also warned earlier this week that the coronavirus in Europe has “reached an epidemic” and “does not stop at national borders”.

But researchers are warning against panicking prematurely.

The Robert Koch Institute continues to assess the risk to the health of the population in Germany as ‘low’, but points out that this could change at any time.

According to a new European Centre for Disease Control (ECDC) assessment, the risk of infection with the virus is currently “low to moderate” for Europeans except Italians, for whom it is “moderate to high.”

The 19 infections confirmed so far in Germany – most in Bavaria in January – could be traced back in the chain of infection.

The newest infections in Germany were confirmed between Tuesday evening and Wednesday afternoon: three in Baden-Württemberg and two in North Rhine-Westphalia. In each state, the virus was reported to have spread after contact with an initially contaminated person.

In Italy, where over 380 cases and 12 deaths have been reported as of Wednesday, this crucial information about the original source of the infection was missing. What measures is Germany taking against the coronavirus?

The German government has provided information on its homepage, breaking down the virus and trying to quell fears.

No drastic measures such as border closures are planned in Germany, nor are train services closures such as one which occurred over the weekend between Austria and northern Italy.

According to the Interior Ministry, it is not yet possible to think about sealing off entire cities. Rather, individual measures such as the isolation of people with suspicious cases, are being taken.

The decision on such a quarantine measure will be made by the responsible health authority. The isolation can then take place in a hospital or at home.

How concerned are Germans?

German authorities seem to be more worried about how the country’s export-oriented economy will be affected than direct health consequences.

Several large German companies, such as Adidas, have temporarily put a halt on their operations in China. German airline Lufthansa also announced on Wednesday that it would freeze new hires and cut costs to help cushion the economic impact of the coronavirus.

On Tuesday, Free Democratic (FDP) leader Christian Lindner called on Economy Minister Peter Altmaier and Finance Minister Olaf Scholz to put together a package “to prevent a crash of the German economy”. Germans are more worried about economic than personal health consequences posed by the virus, according to a new survey. Graph prepared for The Local by Statista.

“Because of the coronavirus, the stock markets are going downhill, and the Federation of German Industry warns of an economic slump,” Lindner said at a press conference.

Most current and upcoming major events in Germany, such as the Berlinale and the large travel trade fair ITB Berlin, are not being cancelled in worries over the coronavirus.

However, large international industry trade show Light+Building Frankfurt has announced that it’s cancelling this year’s event, which was slated to be held March 8-13th, after organizers decided it would be too difficult to implement a multi-stage health check on guests from China.

Does it make sense to wear a mask?

Most researchers agree on one thing: it makes no sense for healthy people to wear a mask.

READ ALSO: Coronavirus: Demand for face masks in Germany jumps: But do they actually work?

It is of course a mechanical barrier. But Clemens Wendtner, head physician of the Infectiology Department at the Munich clinic that treated German patients, points out that masks lose their protectiveness over a longer period, but are suitable for a short amount of time – for example for doctors who enter isolation wards.

Humidity caused by breathing can wear at the mask’s ability to protect for a longer time.

But the worry remains great: in Berlin, where there have been no reported cases, such protective masks were sold out at most pharmacies over the weekend.

Could what occurred in Italy occur in Germany?

German residents don’t need to be concerned if they have been far away from the known infected areas, especially in Lombardia (where there have been 165 cases) and Veneto (27 cases).

But Carola Reimann, the Health Minister of Lower Saxony, told Germany’s Tagesschau, those who may have been to affected areas should look out for symptoms.

“Anyone who has been to Italy, who shows symptoms of illness, who has met with sick people in Italy, should contact their public health department,” she said.

Throughout Germany, there have been several “false alarms” of the coronavirus in recent weeks, in which a person suspects they have the virus and in reality just have the flu. Most major hospitals throughout the country are now equipped to test for the virus.

How much of a threat is posed by the virus?

For most young people or middle-aged people, the virus is not life-threatening if they are overall healthy.

Most of those who are ill probably only show an infection of the upper respiratory tract, i.e. cold-like symptoms.

However, it is still not completely clear under what conditions the disease changes its stage in some patients, for example, it can cause more severe symptoms when it reaches the lungs. Men are also said to be more likely to be infected than women.