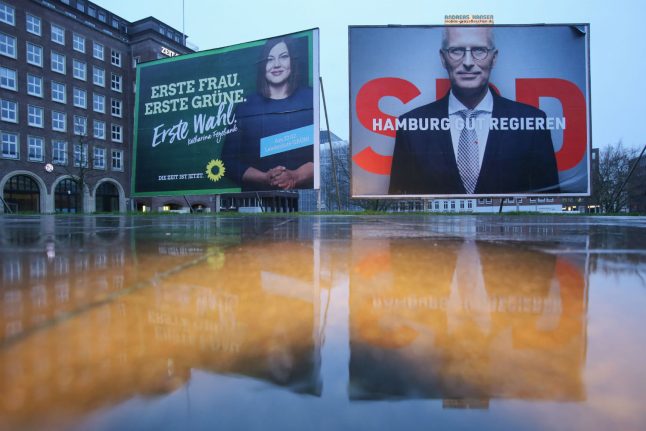 Over the longer term, the progressive, ecologist Greens look set to replace the centre-left Social Democratic Party as the main national rival to Merkel's CDU conservatives, with support for them surging last year and now almost twice as high as for the SPD.

But things are not so gloomy for the centre left in Hamburg, where despite the Greens' gains, the SPD looks set to maintain its grip on the mayor's seat.

READ: What can we expect from Hamburg's state elections on Sunday?

In opinion polls in this wealthy “Free Hanseatic City” last week, support for the SPD was well over 30 percent, a lead of more than 10 points over the Greens and three times higher than the CDU.

“We have to hold our ground against the federal trend,” SPD lead candidate and incumbent Hamburg mayor Peter Tschentscher, 54, told AFP.

In part, the centre left has done so by adopting policies with a distinctly “green” feel, including a proposal to convert a massive coal power plant to natural gas to slash greenhouse emissions.

Meanwhile, the far-right AfD — which enjoys strong support in the east of the country — is struggling to gain ground in prosperous Hamburg where it could even fall short of the five percent hurdle to enter parliament.

At just under 3,000 euros ($3,258) per month, incomes in the port city are somewhat higher than the national average.

On Friday, the Greens' national leader, Robert Habeck, said that the prospect for the ecologists doubling their score in Hamburg from the last vote in 2015 was “phenomenal”, even if they fail to unseat the SPD's Tschentscher.

Should the opinion polls prove correct, the port city will likely retain the “red-green” coalition that has ruled since 2011, sparing Berlin the political earthquakes provoked by other recent regional votes.

Earlier this month, Merkel's conservatives were shaken by the apparent alliance of their regional branch in the eastern state Thuringia with the far-right AfD party, voting in a liberal politician as state premier.

The breach of a historic political taboo provoked a nationwide outcry.

As a result, CDU leader and Merkel's heir apparent, Annegret Kramp-Karrenbauer, announced her resignation, throwing open the question of who will succeed the veteran chancellor following elections next year at the latest.

Meanwhile, the SPD's failure to recover from disastrous showings in federal elections in 2017 and in subsequent state polls has seen nervous party members chew through multiple leaders.

The party finally settled on a duo of relative unknowns last year after a long and divisive selection process.

The pair, Norbert Walter-Borjans and Saskia Esken, have been notable by their absence from Hamburg campaign events.

While Hamburg's political make-up is unusual, events in the final week of campaigning showed that the port city is far from insulated from events in the rest of Germany and Europe.

On Friday, Swedish climate activist Greta Thunberg joined a massive “Fridays for Future” demonstration in Hamburg attended by around 10,000 people, according to police.

Weekly marches across the country by the school strike movement last year helped force Berlin to raise its climate ambitions and fix a binding end to coal power generation by 2038 in law.

At the same time, support for the Greens has surged across the country.

Meanwhile, both the SPD and the Greens cancelled final campaign events on Thursday, after a racist gunman killed nine people with migrant backgrounds in the city of Hanau.