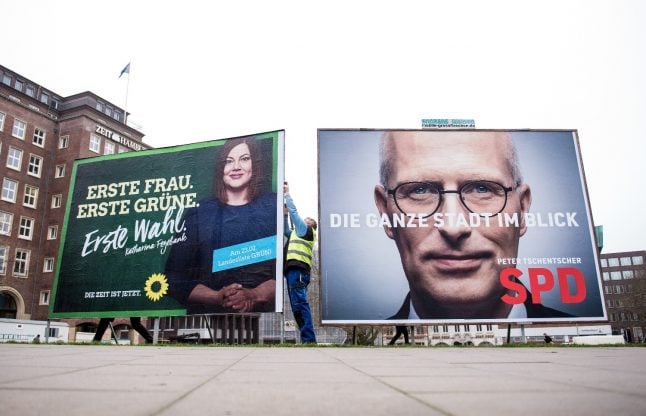 Despite the sizeable distance from the Hanseatic state-city of Hamburg, Social Democrats (SPD) at the party’s federal headquarters in Berlin are feeling optimistic.

They are hoping that after what feels like an eternity of plummeting in the polls, things will finally start to go uphill.

More than half a year ago, the party faced the resignation of its leader Andrea Nahles, an exhausting string of successors and several bitter election defeats.

After the electoral scandal in Thuringia, the SPD is no doubt happy that critical eyes are now focused on the Christian Democrats (CDU) – away from them.

According to a ZDF political barometer published on Thursday, the Social Democrats would garner 39 percent of the vote if the Sunday elections were already underway.

According to the projection, the Greens would take 24 percent, the CDU 12 percent, the Left (Die Linke) at 8.5 percent and the AfD 6 percent.

The Free Democrats (FDP) would then be in danger of even getting a seat in the parliament, possibly missing the minimum five percent threshold. Current Mayor Peter Tschentscher will likely have to accept a lower number of votes than what he received in the 2015 elections. During those elections under former mayor Olaf Scholz, the SPD won 45.6 percent of the vote.

However, the 54-year-old Tschentscher does not seem alarmed: “Since the last election, the political framework in Germany has changed drastically. We are ambitious in our election goals, but also realistic.”

“I think the election in Hamburg is a confirmation that Social Democrats have held responsibility in the state for decades,” said SPD parliamentary group leader Rolf Mützenich.

READ ALSO: SPD shakeup: What does the future hold for Merkel's coalition's government?

He said voters no longer have fixed affiliations to parties, and that people only decide on a party very late in the election cycle.

“I wish the SPD in Hamburg every success, which of course would also give us a tailwind for a strong and confident SPD at the federal level,” said Mützenich.

But staying ahead of the competition and remaining the strongest force in Hamburg should make up for the SPD’s losses.

Earlier in the election, polls seemed to show the much-smaller Green coalition partner could take over the helm in the Senate this election cycle.

But the elections haven’t all been all smooth sailing. The “Cum-Ex” scandal, in which the Hamburg-based Warburg Bank was allowed to keep €47 million worth of unpaid taxes from 2009, is often brought up by Tschentscher’s opponents.

Questions include queries as to why the bank wasn’t pressed for the money, eventually letting the statute of limitations run out.

Current deputy mayor and the Green’s mayoral candidate against Tschentscher, Katharina Fegebank, as well as other opposition party candidates, asked Tschentscher to explain how the financial authorities dealt with Warburg Bank.

During a TV debate called “Duell,” Fegebank said she felt Tschentscher had used his political influence for his gain. She demanded to know why the €47 million from 2009 were not recollected. Tschentscher rejected the accusation. However, he did not comment on the specific case, citing Germany’s tax confidentiality laws. Hamburg's deputy mayor and mayoral candidate Katharina Fegebank (The Greens), stands next to mayoral incumbent Peter Tschentscher (SPD) before a debate on NDR's “Duell.” Elections will be held in Hamburg on Feb. 23. Photo: DPA

The new SPD federal presidents, Saskia Esken and Norber Walter-Borjans, were not invited to the recent elections in Hamburg, a strange occurrence since the city is one of the only places in Germany where the SPD has a clear lead.

One explanation: Hamburg Mayor Peter Tschentscher put all of his support behind Federal Minister of Finance Olaf Scholz in the tough race for the SPD chairmanship.

Scholz, who was also Tschentscher’s mayoral predecessor, lost the race. Tschentscher subsequently distanced himself from the new top SPD duo.

But Tschentscher’s plan to keep the federal SPD at bay before the election Sunday seems to be working: While the SPD currently polls nationwide at 14 percent, it could come close to 40 percent in Hamburg.

The SPD’s and the Green’s party’s “Red-Green” coalition would therefore have a clear majority and could continue to govern.

The distance of the campaigning Hamburg colleagues, which makes the doubts in the own ranks of the new SPD bosses clear, doesn’t bother Mützenich.

“The Hamburg SPD renouncing leaders from the top of the federal government is not a new experience,” he said.

He added that this had already happened in other federal states, and understandably so. “There are no early elections to the Bundestag – you want to measure yourself by what you've done for the state.”

SPD vs. Greens for mayor

Tschentscher skilfully wrestled the topic of climate protection away from the Greens, who generally capitalize on this topic.

“It won't get any greener” than with his SPD, he promised voters. He also likes to make the distinction between “willing” and “able” in his climate policies, criticizing the Greens as well as his challenger Fegebank. The SPD stands for “keep it up”, says the Fegebank. She wants “to do more with this city with courage, optimism, government experience and assertiveness” and above all to lead Hamburg more quickly to a climate-friendly future.

Coming in at the polls at just under 30 percent, the Greens can still expect their 2015 result to double since 2015’s 12.3 percent. And unlike Tschentscher, Fegebank will likely gain favor with the Green’s popular federal leaders Annalena Baerbock and Robert Habeck.

Tschentscher, on the other hand, attaches great importance to the independence of Hamburg's SPD faction, the party of every single mayor since 1949 (except for 13 CDU-ruled years).

“This is an important message for everyone who has relied on us in recent years: Our course remains the same regardless of how the SPD develops nationwide.”

The Hamburg branches of the SPD, Greens, Left, CDU and FDP, all in the final phase of their campaigns, canceled events planned for Thursday and Friday. The alleged reason was the racist shooting in Hanau that left 10 victims dead Wednesday night.

The AfD faction in Hamburg also canceled its final election event. Due to the political and media sentiment and expected massive counter-protests, the AfD of Hamburg said the security of local citizens could not be guaranteed. In addition, the party did not want to be accused of acting insensitively.