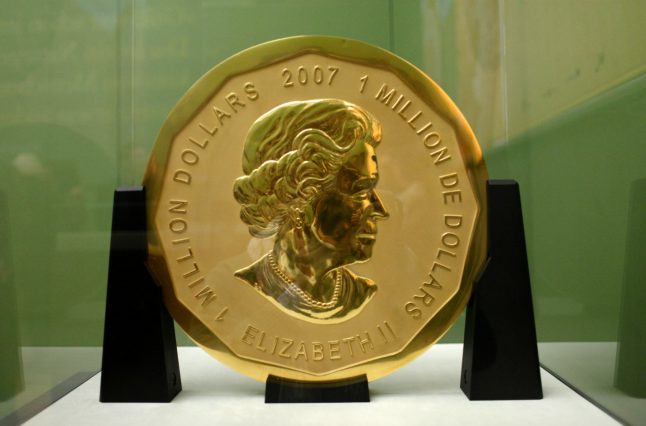 State court judges jailed two men aged 23 and 21, who belong to a family of Arab origin notorious for ties to organized crime, for four years and six months each.

A 21-year-old security guard at the museum received a sentence of three years and four months, while a fourth defendant was cleared of all charges.

Police have found no trace of the 100-kilogram Canadian coin since the late-night heist in March 2017 from the Bode Museum, located close to Chancellor Angela Merkel's Berlin apartment.

The “Big Maple Leaf”, one of five minted in 2007, is considered the world's second-largest gold coin after the one-tonne Australian Kangaroo issued in 2012.

Prosecutors assume the nearly pure-gold treasure, which bears a profile image of Queen Elizabeth II, was either cut up, melted down or taken abroad.

The coin has a notional value of one million Canadian dollars ($750,000), but the gold itself is worth considerably more.

Police raids in July 2017 on premises in and around Berlin linked to the perpetrators' Remmo “clan” saw guns, luxury cars and more than €100,000 in cash confiscated.

Investigators also used phone taps and GPS devices to track cars and searched more than 50 properties, the defence said at the trial.

They broke in through a window, smashed a glass case with an axe and used a rope, wooden beam and a wheelbarrow to lift the coin onto adjacent elevated urban railway tracks before transferring to a car, said prosecutor Martina Lamb.

The Remmo family, whose patriarchs fled war-torn Lebanon in the 1980s, are considered to be one of Berlin's most notorious organised crime clans.

Police last year targeted the Remmos with the seizure of 77 properties worth a total of €9.3 million, charging that they were purchased with the proceeds of various crimes, including a 2014 bank robbery.

In recent years, so-called “clans” of primarily Middle Eastern origin have become a particular focus for police, politics and media in Berlin.

A popular fictional TV series, “4 Blocks”, has even focused on a crime family in the capital's Neukölln district.