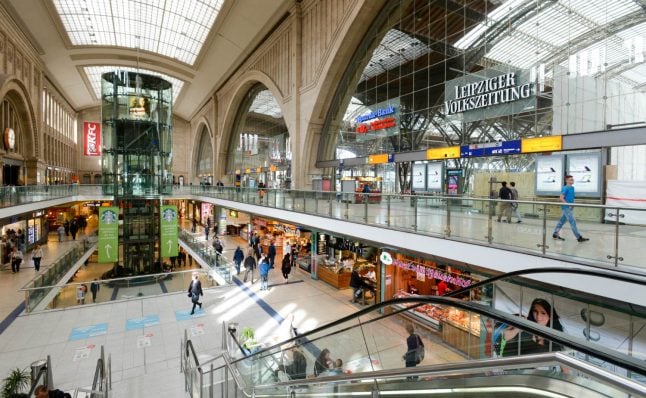 Germany's top station is Leipzig Hauptbahnhof, according to a ranking of Europe's best train hubs.

The Consumer Choice Center (CCC) examined Europe's 50 largest railway stations and ranked them in terms of passenger experience, according to a mix of factors ranging from how crowded platforms are and accessibility to the number of destinations and cleanliness.

All of them shine thanks to low numbers of strike days, several destinations, accessibility for passengers in wheelchairs, and diverse food and shopping offerings, according to the CCC.

Here is the ranking of the top 10 stations. What makes stations stand out?

Zurich and London stand out for several reasons. They also scored highly because both offer 10 international destinations, while Leipzig has only one international connection according to the evaluation.

On the other hand, there are 51 destinations within Germany that can be reached from Leipzig. In this category, the Saxon station is only defeated by Paris' Gare de Lyon, which has 55 domestic destinations.

However, it's still not enough for a top ranking for the Paris train station. This railway hub is placed in the middle of the ranking (around number 16) , while most other stations from France are at the very bottom. This is mainly due to the high number of strike days.

Perhaps not unsurprisingly, the French clock up to 118 days – almost a third of the year – in strikes. In Leipzig and at the other German stations there were about 100 fewer days of strikes, with a total of about 16 days.

Apart from Leipzig, Munich's central station also made it into the top five in the ranking.

The station in the Bavarian capital can also boast a top ranking for international connections due to its location. A total of 14 international destinations are served from here – only Utrecht in the Netherlands has more, with 15. Munich is clearly lagging behind in terms of the number of shops in the station, with only eight.

However, according to German daily Welt, who reported on the railway station ranking, that's probably due to the renovation work currently ongoing.

The stations in the top three places have about 10 times as many shops. In terms of cleanliness, Munich receives 95 percent, however Leipzig and Zurich were able to pocket a perfect 100 percent rating.

However, not all German railway stations are rated highly. Essen in North Rhine-Westphalia, for example, doesn't get a glowing rating.

Although the station manages to land in 25th place, Essen station achieved the worst rating of all 50 in the cleanliness category with 60 percent. The testers obviously perceived it as particularly grubby.

According to the passenger association Pro Bahn, this is no coincidence: there are several dirty stations that are not up to scratch.

“In the last 15 years, the quality of the stations in Germany has risen sharply on average,” chairman of Pro Bahn, Karl-Peter Naumann told Welt. However he added: “Many stations have improved, but not all.”

Particularly in western Germany, Naumann said, there are still lots of stations that could do with better cleanliness, such as Duisburg and Düsseldorf.

“This is a huge building that has been combined with a shopping centre,” he said. “It is precisely the shopping opportunities that have often been created by attracting external investors to stations that have led to a significant upgrading.”

However, Naumann can also see why Zurich train station has landed in a better spot than its German competitors.

But even outside the big stations in metropolises there are many stations worth seeing, said Naumann.

Regardless of the rankings, everyone has their favourite station. And Naumann's personal number one is not in the top 10.

“Whenever possible, I try to change trains in Münster, which is not only very pretty and clean, but has an excellent pastry shop,” he said.