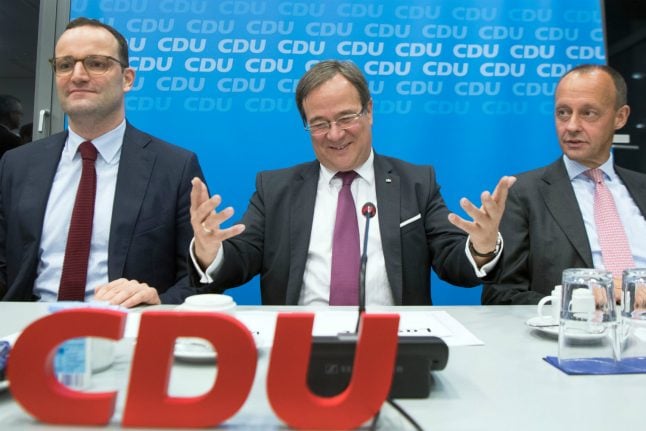 Annegret Kramp-Karrenbauer, who was Merkel's preferred successor, was toppled after just 14 months as CDU leader following a row over apparent cooperation with the far-right AfD party in a regional parliament.

After Kramp-Karrenbauer failed to unite the party behind her, fears abound that the bid to find a worthy successor to Merkel could split the CDU, as the top candidates have differences in political direction.

“The problem with political giants is that they have to end like giants… an orderly transition of power is not possible,” wrote popular daily Bild on Sunday, comparing Merkel to former CDU chancellor Helmut Kohl.

After nearly two decades in which Merkel has positioned the CDU firmly in the centre, the race is set to be defined by differing visions of the party's future.

Merz and Spahn, both of whom ran against Kramp-Karrenbauer in the last leadership race, advocate a return to the party's conservative roots, while Laschet is more of a centrist like Merkel.

Ambitious 38-year-old Spahn, meanwhile, has combined social liberalism on issues such as gay marriage with a harder line on immigration.

Speaking to Bild on Sunday, the leader of the CDU's parliamentary youth wing Mark Hauptmann said a “team solution” between Merz and Spahn would be “ideal”.

“They would speak to the conservative wing but also to the youth, and cover both rural and urban milieus,” he said.

And some believe that cooperation between all three candidates may be the best way to keep the CDU united.

“The CDU needs all three, regardless of which roles they take,” former CDU general secretary Ruprecht Polenz told Bavarian radio on Saturday.

The contest comes as the CDU struggles to fend off electoral pressure from the AfD to the right and the Green Party, which is soaring in the polls, to the left.

It has tumbled from 40 percent of the vote under Merkel in 2013 to poll at just 26 percent, according to an Infratest survey published last Thursday. Angela Merkel wants to step down as chancellor when her term ends in 2021. Photo: DPA

Leading conservative figures have warned that the party could lose further support if the leadership question is allowed to drag out.

Kramp-Karrenbauer herself has repeatedly said she wants the question of her succession to be resolved by the summer.

After this week's meetings with candidates, she will hold further talks with CDU grandees next Monday before agreeing a definitive time frame for her departure.

There may yet be another twist in the tale, however.

Kramp-Karrenbauer has called for her successor to also be named as the CDU and CSU's joint candidate for chancellor at the next elections.

Yet CSU leader Markus Söder said Monday that he believes the two questions should be answered separately.

While the CSU would not meddle in the CDU leadership debate, Söder said, “the question of the election candidate can only be answered together”.

His comments will prompt speculation that the CSU leader favours a fourth prospective successor to Merkel: himself.