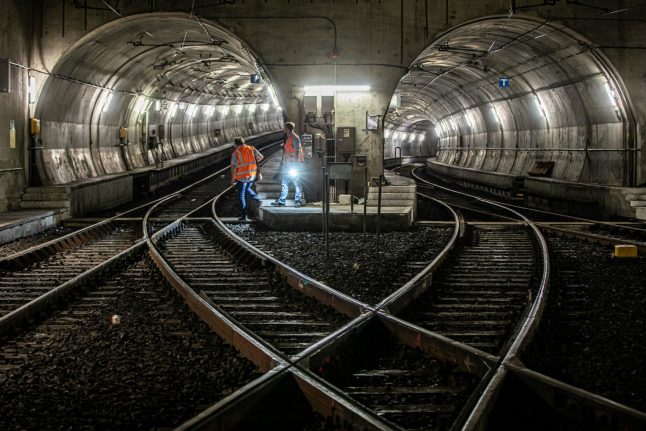 Could such U-Bahn tracks, such as these pictured in Frankfurt, be used in future to carry packages? Photo: DPA

“I would be willing to do a pilot project with a city where we repurpose a subway and turn it into a special Paket-U-Bahn (subway for packages),” the CSU politician said at a recent press briefing.

The special train would run starting around 2am, after many German U-Bahn systems have stopped service during the week.

It would then transport parcels and small packages to temporary storage facilities – so-called micro-hubs – at stops in various districts of German cities.

Package relief is urgently needed, says the politician. Whether in the form of electronics, clothes or medicine, online trade in Germany rapidly growing.

Services that deliver fresh products such as food have additional time pressures.

READ ALSO: Everything you need to know about sending mail in Germany

In order to speed up the delivery process, Scheuer further proposed E-cargo bikes which would pick up the parcels from the U-Bahns.
“We would be installing micro-hubs, from where the suppliers can transport the goods onward on an electric cargo bicycle,” said Schauer.
Scheuer expects that traffic jams caused by delivery trucks – for example due to holding vehicles in the second row – could be reduced by up to 20 percent.
“We should be prepared to rethink things,” said Scheuer. “The point is to reduce above-ground traffic.”
Environmental concerns

A full 16.3 percent of packages delivered are returned and often destroyed afterwards, according to Spiegel Online.

For the parcel sector, online retail is meanwhile causing sales to continue to grow.

According to figures from the Federal Network Agency, parcel service providers generated €18.78 billion in profit Germany alone in 2019, up from €17.66 billion in 2018.

Deutsche Post dominates the market in this sector with a share of around 70 percent, and its competitors are Hermes, UPS or DPD.

“For some time now, the job market has been increasingly empty,” a spokesperson from the union Verdi recently said.

It is not known whether Scheuer's subway idea can also be a solution to this problem. Nor is it known how he intends to solve the problem in cities that do not have an underground railway.