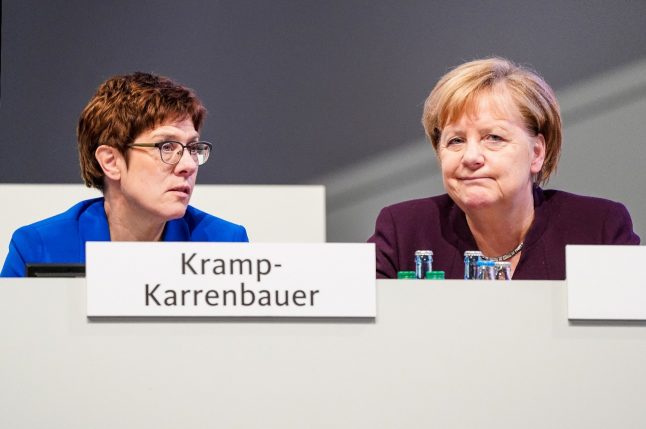 Annegret Kramp-Karrenbauer next to Angela Merkel at a CDU meeting in 2019. Photo: DPA

Annegret Kramp-Karrenbauer, the leader of the centre-right Christian Democratic Union (CDU), opted out after barely a year in the post — a period marked by internal battles over whether to cooperate with the anti-immigrant Alternative for Germany (AfD).

She announced that she was standing down as CDU leader and would not seek to be the party's candidate for chancellor in next year's general elections.

“This is an unusually serious situation for the CDU,” said close Merkel ally and Economy Minister Peter Altmaier.

Speaking later in Berlin, Merkel said she “regrets” AKK's departure, at one point calling her simply “Annegret” in a rare personal moment in front of the cameras.

AKK, as Kramp-Karrenbauer is popularly known, said she had had “a difficult time” as party leader.

“At present, we can feel powerful centrifugal forces in our society and in our party,” she told reporters in Berlin.

While the party has a policy of no cooperation with either far left or far right at a national level, regional CDU lawmakers last week went rogue and voted with MPs from the AfD to oust a far-left state premier in Thuringia.

The breach in the political dam towards the AfD in Thuringia prompted Merkel's junior partners in the national government, the Social Democratic Party (SPD), to call urgent talks at the weekend about the partnership's future.

AKK's departure, the most prominent political head to roll after the Thuringia crisis, was “unsettling,” SPD board member Michael Roth tweeted Monday.

“It is still less certain whether decent democrats stand together in the battle for democracy and against nationalism,” he added.

“The CDU must clarify its relationship to far-right extremists,” SPD co-leader Norbert Walter-Borjans told a press conference on Monday.

Centre-left SPD ministers will not work with a party “that leaves room for far-right forces,” he added.

With the race to the chancellery wide open again, Süddeutsche Zeitung said the aftershocks could be huge.

“It's very possible that the chancellor's exit is coming closer,” it wrote.

Voting alongside the far right breaches one of the fundamental taboos of post-World War II German politics – the refusal of mainstream parties to work with the extremes.

AKK's attempts to impose rigid no-cooperation discipline from Berlin have foundered especially in Germany's former communist east, where strong showings for the AfD and Left in some states threaten the ability of mainstream parties to form functioning coalition majorities.

Germany's next national elections must take place by autumn next year, although the fractious coalition between the CDU, its Bavarian CSU allies and the SPD may not hold until then.

AKK however said she did not believe her retreat would endanger “the stability of the grand coalition government”.

By this summer, the Catholic mum-of-three hopes to have set up a process for finding the person to lead the CDU into the next federal campaign.

“Separating the office of chancellor and the party chairmanship is weakening the CDU,” she said Monday — an implicit rebuke to Merkel's 2018 decision to split the two.

The veteran chancellor gave up on the party leadership as a string of regional defeats and the growth of the far right undermined her popularity within her own ranks.

Merkel, who has been in power since 2005, announced at the same time that she would not run again for the highest office.

Her inability to keep her troops in line prompted Kramp-Karrenbauer to tell a meeting of the CDU's leadership “she will not be a candidate for the chancellery”, the source said.

The move finally ends the role as heir apparent she had held since even before she was heaved with Merkel's backing into the party's top job.

Race to the top

Despite Merkel naming her defence minister last July to lend her the gravitas of federal office, AKK has never managed to stamp her authority on the CDU after her narrow win over challenger Friedrich Merz.

Her bowing out now reopens the race to succeed Merkel.

Merkel has been in power since 2005, but said she would not run again for the highest office at the same time she gave up the CDU leadership.

Merz, a former rival of Merkel's, has been waiting in the wings ever since AKK prevailed in the leadership election, and still enjoys strong backing from the pro-business and more conservative wings of the party.

Just last week, the former CDU parliamentary leader gave up his job at giant asset manager BlackRock “to support the party more strongly in its renewal and re-enter politics”, he said.

AKK's decision to quit “deserves respect,” Merz tweeted Monday. “I will give her every support to lead from the front the process for her succession and the chancellor candidacy.”

READ ALSO: Annegret Kramp-Karrenbauer: The woman behind the 'mini-Merkel' headlines

The Chancellor said he would be attending the EU summit at the end of May “with the clear message that the Western Balkans belong in the European Union”.

Meanwhile, Germany said it would contribute one billion euros to shore up the Ukrainian government’s finances, as G7 ministers met to discuss further support for Kyiv in the face of the Russian invasion.

The G7 were coordinating “commitments to finance the government functions of the Ukraine”, German Finance Minister Christian Lindner said at a press conference following the first day of the meeting in Germany.

Germany “will make one billion euros available to the Ukrainians in grants,” Lindner said, in addition to a $7.5-billion pledge from the United
States in the process of being approved by legislators.

Lindner said he expected “further steps forward” to be made before the end of the meeting on Friday.

The war has blown a hole in Ukraine’s finances, with tax revenue having fallen sharply.

Kyiv needed a “double-digit billion euro” figure to keep essential services going, Lindner said earlier in the day ahead of the meeting in Königswinter, near Bonn.