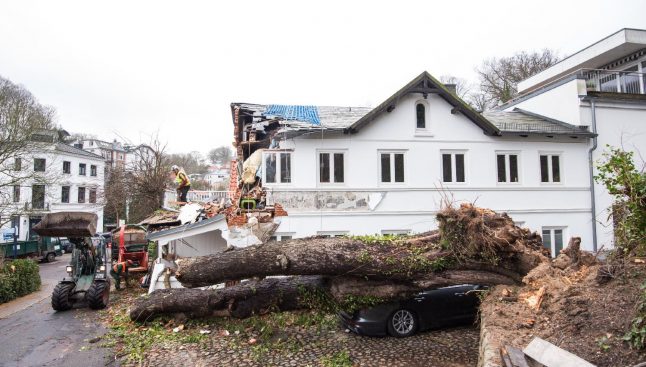 Major damage caused by the storm in Hamburg. Photo: DPA

You'll need to pause your ad blockers to see all the content in this story.

Three people were seriously injured in the storm that's been lashing the country with high winds, forcing major travel disruption.

Two women were badly hurt by a falling tree in Saarbrücken on the French border, with one of them receiving life-threatening injuries, police said overnight, reported AFP.

Further north in Paderborn, a 16-year-old boy was hit on the head by a falling branch.

Weather forecasters said winds of up to 170 kilometres per hour had hit mountainous areas.

These photos and tweets show some of the scenes across Germany. All photos are by DPA news agency unless stated otherwise.

Here's a close up of the tree that crashed onto a car in Hamburg. Police in Paderborn tweeted to say fallen trees were blocking some roads. The city council in Osnabrück tweeted a video showing hailstones.

In Dortmund, this golden retriever felt the force of the wind on the morning walk. Rescue services have been working through the night.

A portable toilet was blown over in Rattelsdorf, Bavaria. No one was in it at the time, thankfully. A construction crane at Frankfurt cathedral crashed into a roof causing major damage. My 7:00 am train got canceled bc of ?⛈???☔️ #Sabine
…but finally, 4+ hrs later, a train? from #Berlin to #FrankfurtamMain! Probably I still can make my meeting if no more delays pic.twitter.com/M2YzxF6HBO

Hundreds of flights were cancelled at the largest airports, including 190 in Frankfurt and 420 in Munich, news agency DPA reported. These passengers tried to sleep at Cologne Airport. Stormy start of the week: Where #Sabine sweeps across the country, hardly any trains are running. Large parts of the air traffic and numerous roads are also affected by the #storm. #Germany #NewsDE pic.twitter.com/GRfLerQA1b

Umbrellas have been proving useless, just like this one in Frankfurt. In Lower Saxony, parts of the Autobahn had to be closed. The German Weather Service (DWD) issued an orange level-three storm warning across a large part of the country on Friday.

Forecasters said isolated thunderstorms were expected early in the day, mainly affecting a strip from the Mosel and Main rivers to the Erzgebirge region.

From noon, the situation was set to get worse.

Forecasters said “extremely heavy rainfall of around 40 litres per square metre” was expected in a short time in some areas as well as “large hailstones of up to five centimetres and gale-force winds with speeds of between 100 and 130 kilometres per hour”. 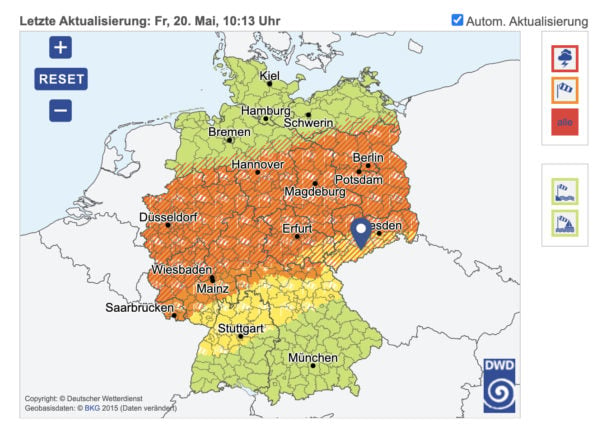 The DWD said isolated tornadoes were not being ruled out.

On Friday afternoon, the thunderstorms were set to move further eastwards, and in the evening there could also be severe storms in the south of the country with the potential for heavy rain and hail.

Temperatures on Friday in Germany will range between 20C at the coast, up to 27C in the centre and a very muggy 34C on the Upper Rhine. 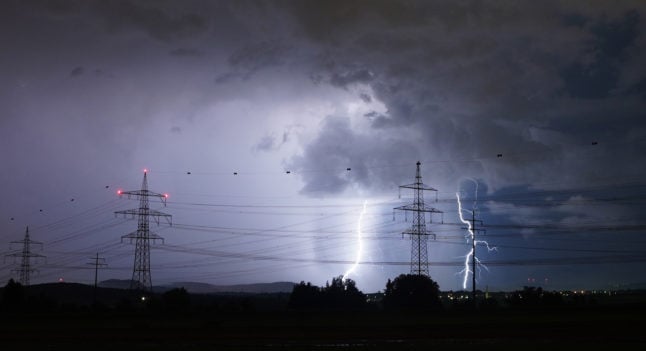 Heavy thunderstorms moved across western Germany on Thursday, but the damage was less severe than feared.

However, there was disruption to travel, including on train services from Germany to the Netherlands. Late in the evening, Deutsche Bahn reported that international long-distance trains between Amsterdam, Cologne and Frankfurt were running again without restrictions.

On the line between Cologne and Wuppertal, delays and cancellations were also expected on Friday. Long-distance lines were also affected, Deutsche Bahn said.

There was also heavy rainfall. In Hamburg, a flooded underground car park had to be pumped out by emergency services.

Meanwhile, a lightning strike sparked a roof fire in Zellingen near Würzburg. The family was able to leave their home and nobody was injured.

The North Rhine-Westphalia State Office for Nature and the Environment warned that localised flooding could occur in areas affected by heavy rain, and water levels could rise significantly on Friday.

Due to the warning of heavy rain and hail, all schools in the Ahrweiler district in Rhineland-Palatinate were to remain closed on Friday.

Residents were urged to keep listening to weather forecasts as well as checking warning apps like Katwarn and Nina. In the Ahr valley, 134 people were killed and thousands of homes destroyed in severe flooding in July 2021. Many people are still living in temporary accommodation.

Overnight and into Saturday, the storms are expected to move east.

The DWD said storms and heavy rainfall was expected around the Danube river.

Temperatures will fall slightly – on the coast it should reach 14-18C, while it is likely to be around 20-25C elsewhere in Germany.