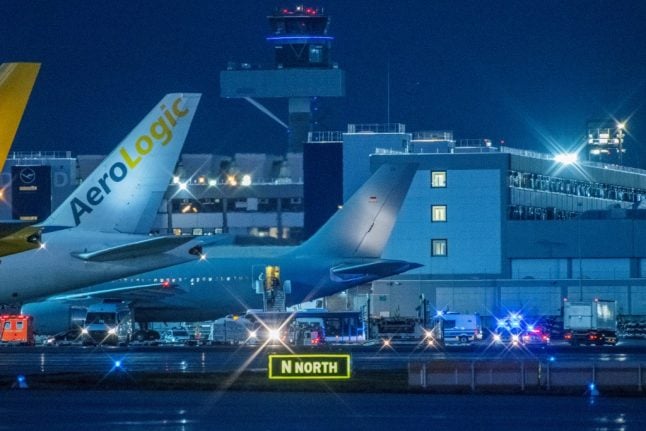 The plane carrying 100 German citizens and 24 foreign nationals — mainly Chinese — landed at Frankfurt Airport around 1540 GMT after being delayed when Russia refused to let it land and refuel.

The Moscow airport claimed it had a “lack of capacity” and the Airbus A310 jet was forced to stop in Helsinki instead.

After touching down and being evaluated at a medical facility at Frankfurt airport, 11 of the evacuees were transferred to hospital with various medical problems, regional Social Affairs Minister Kai Klose told reporters.

Doctors were able to exclude a coronavirus infection in all but one case, the minister added.

After evaluation, all the other passengers were taken under police escort to a military base at Germersheim, 120 kilometres (75 miles) from Frankfurt, where they are due to be quarantined for two weeks.

Those evacuated included 100 German nationals. 22 Chinese, an American and a Romanian.

Meanwhile Bavaria's health minister said on Saturday an eighth person had been confirmed with the virus in Germany, a 33-year-old man from Munich.

The patients are all in the southern Bavaria region and comprise seven employees of car parts supplier Webasto and a daughter of one of the workers. All are in “a very good state of health”, Germany's health minister Jens Spahn said earlier before the eighth person was confirmed to have the virus.

“What worries me are conspiracy theories that spread uncertainty,” he added, saying that there were reports that the children of Webasto employees were being turned away from daycare in Germany.

The deadly virus has killed over 250 people in China so far.

The Wuhan metropolis is at the heart of the SARS-like virus epidemic that has led the World Health Organization to declare it an international public health emergency.

The city of 11 million has been subject to an unprecedented lockdown, preventing residents from leaving in a bid to stop the virus from spreading further.

Numerous countries, including France, Britain, Japan and South Korea, have already begun airlifting their citizens out of Wuhan.

In Germany's Palatinate region where the evacuees will be quarantined some locals had managed to maintain a sense of humour about the affair.