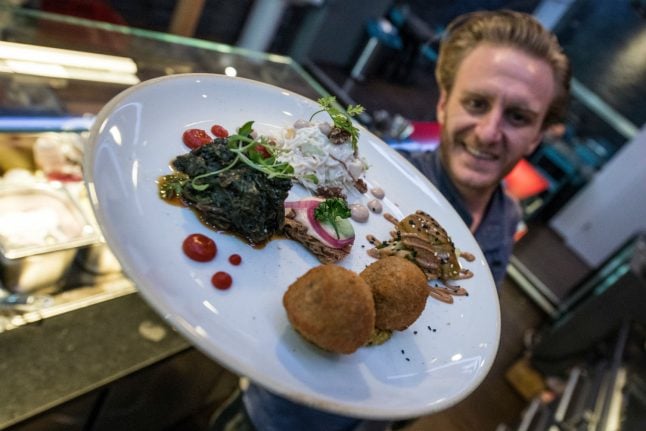 You might assume that heading out to a restaurant in Germany is just the same as in the rest of Europe. In fact, there are some distinct differences.

Arriving at the restaurant

Firstly, when you arrive at a restaurant don’t be surprised if you have to find your own table. At smarter restaurants the serving staff will probably find you a table and there will be a sign asking you to wait to be seated. But at other restaurants, particularly at lunch time, you are expected to find your own place to sit.

When you enter a restaurant where you have to wait to be seated, you might be asked: Haben Sie reserviert? (have you reserved?). To say that you have made a reservation in your name (Smith in this case), say ‘Ja, auf den Namen Smith’.

If you haven’t reserved, you could ask ‘Haben Sie Platz für vier?’ (do you have space for four people?).

Tap water can be controversial in Germany

When you order, prepare to be met with a disdainful look if you ask for Leistungswasser (tap water). In lots of German restaurants this isn’t even an option and it is normally seen as rude to ask for it, although things are starting to change slowly regarding this issue, especially in big cities. If you want still water make sure to specify stilles Wasser, as sparkling water is normally standard in Germany. It is worth asking at the beginning of a meal is card payments are possible. Often they aren't, but it is becoming more and more possible to pay by card, particularly in more expensive restaurants. Photo: DPA

Asking for the bill and paying

When your meal comes to an end make sure to ask for the bill  – Die Rechnung, bitte or ask 'could we pay please?' – Könnten wir bitte bezahlen (you can also drop the -be and just say 'zahlen' ) –  the waiter or waitress won’t bring it unless you ask.

Be prepared to be asked whether you are paying together or separately (zusammen oder getrennt) and make sure to have cash ready, often German restaurants won’t accept cards.

A tip is not included in the bill and the norm in Germany is around 10%, or people round up their bills (for example from €13.40 to €15). The tip is normally given when paying the bill, not left on the table. If you want to tell your server to keep the change as a tip, say ‘das stimmt’.

SEE ALSO: 10 mouthwatering foods you have to try in Germany

die Speisekarte (the menu) is normally split up into different sections, such as:

Sometimes there is a set menu option, which is written as das Menü

das Fleisch is the German for meat. Here are the different meats which you might find in a German restaurant: The variety of food available in Germany is huge and does not only include traditional food. Germany now has 11 3-starred Michelin restaurants. Photo: DPA

What German specialities might you find on the menu?

das Schnitzel – it's traditionally an Austrian specialty rather than German, but Schnitzel is widely available in German restaurants. It’s a thin slice of meat (traditionally veal but often pork) that is covered in breadcrumbs and fried. Sometimes it is served with sauce, such as Jägerschnitzel with gravy and mushrooms, and the Zigeunerschnitzel with spicy vegetables.

die Bratkartoffeln – a side dish of fried potatoes, often served with bacon and onions.

die Schweinshaxe – the traditional German dish of roasted pork knuckle. Eisbein  is also on pork knuckle, but is prepared by boiling rather than roasting. Schweinshaxe is served at Oktoberfest in Munich. Photo: DPA

What other vocab and phrases do you need to know?

Gibt es etwas Veganes? – is there a vegan option?

Was können Sie empfehlen? – What can you recommend?

Was für Bier haben Sie? – Which types of beer do you have?

Gibt es eine Spezialität aus dieser Gegend? – Is there a speciality from this region?