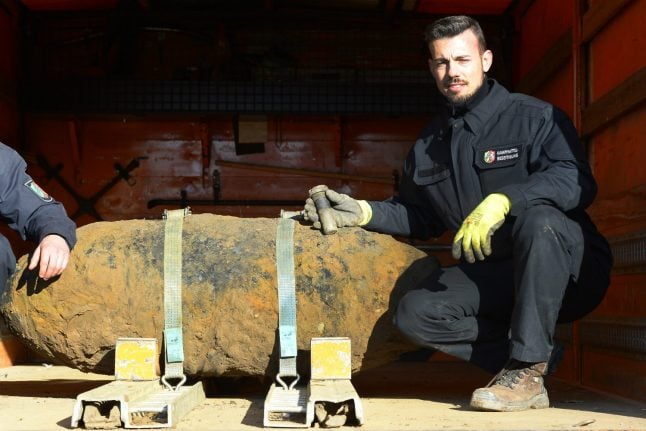 Stefan Höreth of the bomb disposal unit next to the WWII bomb. Photo: DPA

The 500-kilogramme (1,100-pound) US bomb – dropped during a heavy bombardment of the western German city – “no longer poses a danger”, the city said in a statement shortly before midday.

Construction workers found the bomb on the right bank of the Rhine river on Monday evening, prompting the evacuation of nearby offices including those of broadcaster RTL and the Cologne Opera.

Very few people live in the area, which is primarily a business district.

“The roughly 10,000 employees of the affected companies and the 15 residents may return to their buildings,” said the city's statement.

The nearby Hohenzollern rail and pedestrian bridge, which leads to Cologne's famous Dom cathedral and central train station on the opposite bank, was closed during the defusing efforts, severely disrupting rail traffic.

After the bomb was deactivated in an operation that took less than an hour, German rail operator Deutsche Bahn announced that the bridge had reopened, as had Cologne's smaller Messe/Deutz station.

The rail firm warned passengers to expect some knock-on effects from the earlier delays and cancellations.

The airspace above the exclusion zone was also reopened and river traffic was allowed to resume after a short interruption in one of the world's busiest waterways.

Separately, Berlin police announced that another unexploded WWII bomb had been unearthed close to the capital's city hall during construction works.

The 250 kg ordonnance is due to be defused later Tuesday, said police.

Earlier this month, some 14,000 people had to leave their homes in Dortmund after two unexploded bombs were found in the city centre.