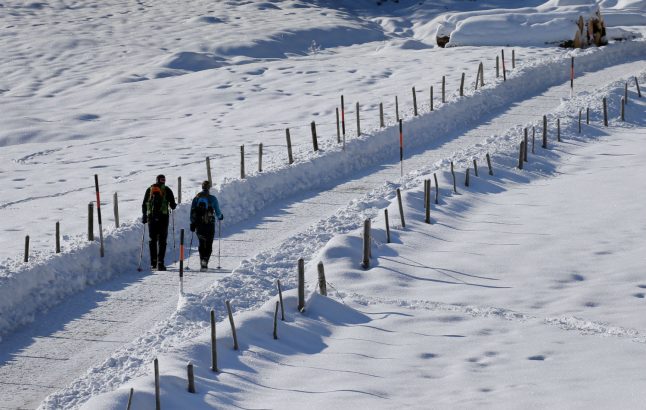 Hikers make their way through a snow-covered landscape near the Oberjoch in Swabia. Photo credit: DPA

So, who's been pirouetting on frozen lakes this winter or getting down in the powder for some snowball fights? Sadly, hardly anyone in Germany, because the weather has been remarkably overcast and mild this winter.

READ ALSO: Nine ways to get through winter the German way

CLAIM: In Germany's latitudes, it may be time to bid farewell to rare snowy winters.

FACT: That's right. According to weather experts, the likelihood of winter snowfall has decreased.

“Where is the white Christmas this year?” That’s what almost everyone in Germany moaned this December. German front gardens no longer have snowmen to guard them. Remember the cold, white winters we used to have?

“That idea is actually a bit deceptive,” said Thomas Deutschländer of the German Weather Service (DWD). Yes, it was colder at the time. Of course there have been outliers in previous winters, such as in 1974-75, where the average temperature was 3.6C. But of the ten warmest winters since 1881, half have been recorded in the past 15 years.

READ ALSO: Germany could see December temperatures as high as 20C this week

And it's also important to note that snow can fall in mild winters when temperatures hover around zero degrees, depending on regional conditions. In fact, climate projections have determined that winter precipitation is likely to intensify in the future.

But there is a downside: rising global temperatures mean that the falling precipitation is much more likely to be rain than snow, according to DWD's experts. The result will be mud instead of winter splendour.

And that’s the state of Germany's winter this year: green, brown and gray as far as the eye can see. For meteorologists, it’s still officially winter until the end of February. So is there still hope this year?

After all, the coldest sections of the year are usually from late January to early February.

The DWD's seasonal forecast could provide answers. This is not a short-term weather forecast you could find in a an app on your smartphone. Instead, DWD’s season forecast is a detailed prediction based on collected historic data combined with climate models.

These seasonal weather maps show that from February to April 2020, the temperature in Germany is likely to be one degree higher than the average of the years 1990 to 2017, which was around 5C.

“This predicts a mild, early spring,” DWD expert Andreas Paxian said. However, he emphasizes that this is not a safe bet. Long-term forecasts are very unreliable for Germany because Europe is a highly variable climate region. Therefore, forecasts looking months ahead should be taken with a grain of salt.

But there are other ways to predict. For example, we can always consult traditional farmer's sayings. One of the hopeful edicts is “Schaltjahr gleich Kaltjahr,” or “leap years equal cold years.” But here, too, the statistics remain unimpressed. Leap year winters were actually 0.2C warmer than the averages of every winter since 1881, according to the DWD.

Whether Germany will get a real onset of frosty cold this winter can only be left to speculation. The probability may not be particularly high, but don't rule it out just yet.