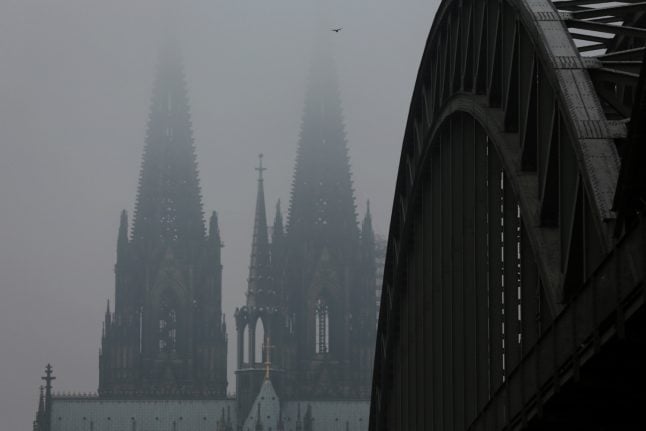 The bomb dating back to the WWII era was discovered during construction work near the Hohenzollern bridge in Cologne, North Rhine-Westphalia.

Authorities warned that the disposal of the bomb would likely result in massive restrictions to Deutsche Bahn's long-distance services.

Trains will not stop at the station Köln Messe/Deutz after 9am, a company spokesperson said in the morning. At the main station, the closing of the Hohenzollern bridge at 12noon is expected to cause major problems.

These disruptions will continue into the afternoon. The total number of trains affected is not clear yet but we've listed some long-distance trains set to be affected below.

The Hohenzollern bridge and the neighbouring central station are one of the most important traffic junctions in the German railway network. During the defusal operation, shipping traffic on the Rhine and the airspace above will also be closed.

Deutsche Bahn tweeted to say there would be delays and cancellations.

The WWII device was found on Monday evening during construction work on the Kennedy bank in Deutz. According to the city council, specialists are to uncover the American '10 Zentner bomb' (weighing about 500kg) this morning. The ground conditions are difficult, however.

An evacuation of the area around will also take place. The evacuation is taking place in parallel. For this purpose, a 500-meter exclusion zone will be established.

According to the council, local businesses, the Cologne Opera and the Rhineland Regional Council are affected. Police said the building belonging to the media group RTL also has to be evacuated. However, broadcasting and production operations will continue from outside, the station announced. In addition, 15 residents have to leave their homes.

Despite it being 75 years since the end of the conflict, World War II bombs are frequently discovered all across Germany.

While they are made safe, there are often mass evacuations and disruption.

According to Deutsche Bahn, the following long-distance connections could be affected and passengers should expect delays or cancellations.