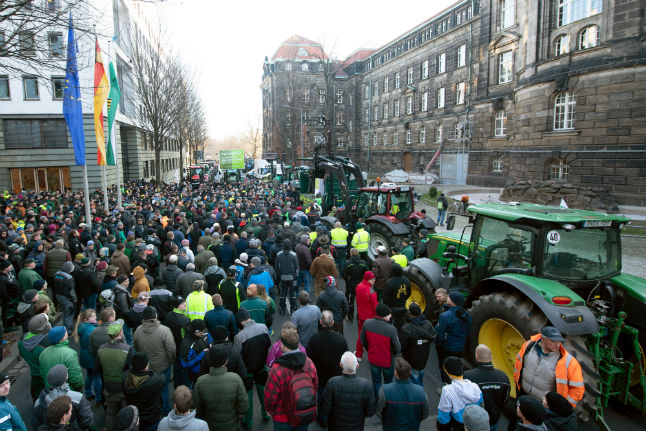 Farmers stand in front of the Saxon State Chancellery during a rally with tractors on Friday. Photo: Media Number:128546526Description:Jan 17, 2020, Saxony, Dresden: Farmers stand in front of the Sax
Thousands of tractors descended on cities across Germany on Friday at the opening of Berlin's annual “Green Week” trade fair, as the farmer's collective “Land schafft Verbindung” (LSV) railed against tightening regulations.
Aggrieved at Germany's latest agricultural reform that includes introducing an animal welfare label on food products and restrictions on pesticides to protect insects, the protesters claim they are carrying the costs for new environmental protection measures.
“Don't forget that farmers feed you” and “No farm, no food, no future”, screamed posters held aloft by farmers, who fear the new laws will slash their revenues.
But lawmakers are being squeezed on both sides, with climate activists arguing that recent agricultural and climate reforms do not go far enough.
The gulf between farmers and environmental activists has deepened in the last years as climate protection shot to the top of the political agenda following weeks of student-led Friday for Futures school strike protests.
The LSV protesters consider themselves a counterweight to the environmentalist grouping “We are fed up!”, which is expected to draw tens of thousands to the streets on Saturday to protest the damaging effects of industrial agriculture.
A yearly fixture since 2011, the green groups-led protests demand full-scale reform to support small farms and environmentally friendly agriculture.
“The agriculture industry is fuelling the climate crisis and societal conflict — we have to stop it!” the organisers state on their website.
'Bring city and country together'
At the opening of the Green Week on Thursday, Agriculture Minister Julia Klöckner urged both sides to be open to compromise.
“We need to bring the city and the country together,” said Klöckner.  Both LSV and “We are fed up!” have said they are open to talks with each other.
But in practice, there has been little sign of a rapprochement.
“We are open to dialogue with the farmers, but we have to have the same objective of ecological transition. Sometimes I have the impression that that is not the case,” Saskia Richartz, a spokeswoman for “We are fed up”, told AFP.
Mark, a 22-year-old farmer and LSV protester from Brandenburg, was blunter in his criticism of the environmentalists. “These people have nothing to do with agriculture,” he told AFP.
Saturday's protesters are not the only ones who are fed up with industrial agriculture.
On Wednesday, two beekeepers from the countryside outside Berlin dumped buckets of honey on the steps of the Ministry for Agriculture.
They claimed that the use of glyphosate in nearby fields forced them to throw away four tonnes of honey every year.
On Friday, Greenpeace activists held a protest at Green Week against cheap meat prices.
Yet Green Party co-leader Robert Habeck warned environmentalists against making farmers into bogeymen.
“We won't get anywhere with moral disdain,” Habeck told media group RND on Friday. But he also insisted that resisting reform was not the way forward. “Less protection for the climate and for animals is not the right answer,”