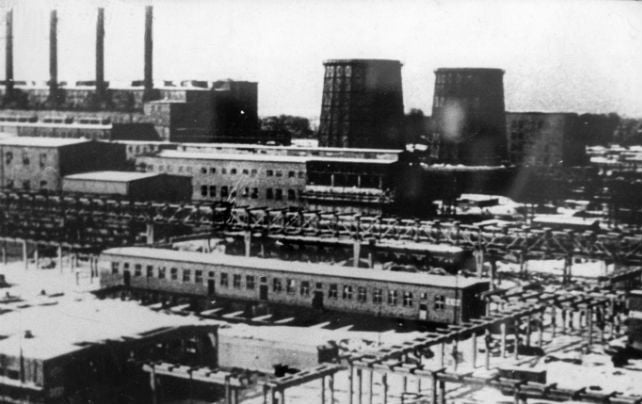 IG Farben's factory/concentration camp in Monowitz. Photo: picture alliance / dpa
The project, entitled “Re-Finding the Sub Camps of Auschwitz” is “like a book of 3,000 pages,” said Cameron Munro, the Scottish founder of the “Tiergartenstrasse 4 Association”, at a press conference.
The site pulls together more than a decade of research on some 45 sub-camps or “kommandos” located on the periphery of the most notorious site of the Nazi Holocaust.
Based on first-hand accounts and research in the archives of the Auschwitz-Birkenau museum and others, the site contains more than 3,500 photos, documents and maps.
It tells the story of each sub-camp, including lists of the survivors and SS guards and information about their personal stories. The site also lists the industrial organisations implicated in exploiting prisoners at the camps.
The most infamous of the sub-camps is Monowitz, which was run by notorious chemical conglomerate IG Farben. Others were dedicated to metallurgy, textiles agriculture and mining. Mining in particular was considered to be a death sentence due to the brutal working conditions, Munro explained.
“By 1943, the Third Reich was desperate for labour for the armaments industry, coal mines, steel works, chemical plants and other businesses to keep the war going,” the website reads in its introduction to the project.
The launch of the project coincides with the 75th anniversary of the liberation of the Nazi concentration camps.
More than 1.1 million people — mostly Jews but also Roma — were killed at Auschwitz-Birkenau, which became a symbol of the Holocaust.
Yet to date, very little research has been done on the Auschwitz sub-camps.
“The sub-camps, traces of which have more or less entirely disappeared, remain important places for the relatives of those who died there,” said Christoph Heubner, vice-president of the International Auschwitz Committee.
He added that the researchers' work had “created something which had not been possible before” by “preserving the traces and honouring the memory of the victims”.
The project was launched in Poland in 2003 by Polish journalist Artur Hojan, a specialist in the extermination camp at Chelmno.
After Hojan's death in 2014, the “Tiergartenstrasse 4 Association” moved to Berlin.
The association is named in reference to the address of the Holocaust Memorial in central Berlin.