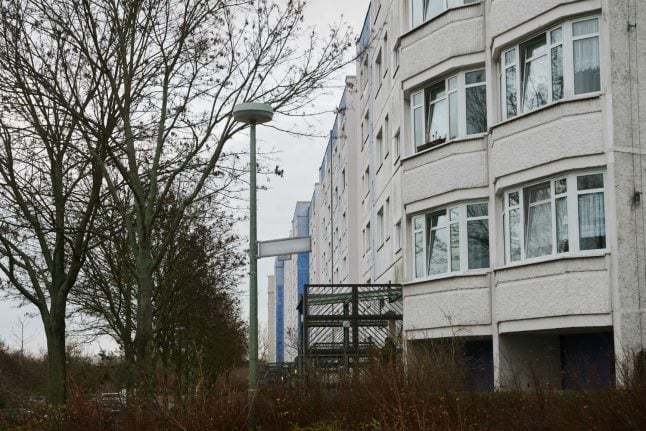 A raid took place in this building in the Berlin district of Marzahn-Hellersdorf. Photo: DPA

German authorities are on high alert for Islamist threats to Europe's most populous country, which has in recent years suffered several attacks.

“On suspicion of planning a serious violent act endangering the state, search warrants are being executed in Berlin, Brandenburg, North Rhine-Westphalia and Thuringia,” the Berlin attorney general's office said via Twitter.

The probe “targets suspects of Chechen origin from the Islamist scene,” it later added.

The alleged militants of Chechen origin are aged between 23 and 28 and “suspected of having scouted locations for a possible Islamist attack”, Berlin police said in a statement.

The suspicions were prompted by pictures found on the mobile phone of one of the suspects during a routine police check, it added.

German news magazine Spiegel said the suspects may have had a synagogue in Berlin in their sights after video material of the building was found.

Some 180 officers took part in the raids, during which they confiscated cash, hard drives and knives.

“Based on the current information, there was not yet any concrete danger of an attack,” police said.

Germany's deadliest attack was a truck rampage through a Berlin Christmas market in December 2016 that left 12 people dead.

The attacker, Tunisian asylum seeker Anis Amri, hijacked a truck and murdered its Polish driver before killing another 11 people and wounding dozens more by ploughing the vehicle into a festive market in central Berlin.

Since then, German authorities have thwarted nine attacks believed to have radical Islamist motives, according to the head of the Federal Crime Office (BKA), Holger Münch.

Most recently, police in the western city of Offenbach arrested three men in November 2019 for allegedly planning a bomb attack in the name of Islamic State.

That same month, a Syrian was arrested in Berlin accused of having procured key components for an explosive device and discussing bomb-making tips with other suspected Islamists in an online chat group.

Germany's security services estimate there are around 11,000 Islamic radicals in Germany, some 680 who are deemed particularly dangerous and capable of using violence — a five-fold increase since 2013.

Around 150 of these potentially dangerous individuals have been detained for various offences.

READ ALSO: Terror in Germany: Investigators have foiled 13 attacks since 2010