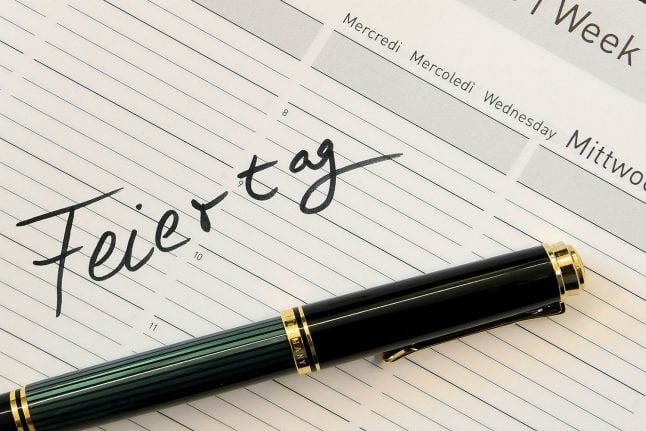 Starting on Monday, Germany has several public holidays spread throughout the year. Unlike in some other countries, however, those that fall on a weekend are not typically transferable to the week.

We break down what Germany's Feiertage are, when they occur and which states celebrate them.

For countries such as Spain, this day is celebrated as a public holiday nationwide. It commemorates the arrival of the magi in Bethlehem to present their gifts to the baby Jesus. For the second year in a row, the capital is officially celebrating the holiday in honour of women. But don’t fret that the day falls on a Sunday: Berliners are compensated with another public holiday exactly two months later.

READ ALSO: What you should know about ‘Frauentag’, Berlin’s newest public holiday

The Friday before Easter is a countrywide public holiday, in which Christians commemorate the crucifixion of Christ. Some states take its religious significance more seriously than others, such as in 12 out of the 16 states where it’s 'illegal' to dance on the day. Yet some (here’s looking at you, Bavaria and Baden-Württemberg) particularly enforce the ban.

READ ALSO: Is it really illegal to dance at Easter in Germany?

While almost all shops and services cease on this day, Berlin’s neighbouring state of Brandenburg is the only day that officially lists it as a public holiday.

The holiday in honour of workers dates back over 130 years and is celebrated around the country with a range of festivals involving everything from dancing around poles to chasing away evil spirits. In Berlin, one of the largest – and typically rowdiest – marches campaigning for workers' rights nationwide typically occurs on May 1st in the Kreuzberg district.

READ ALSO: Why is May 1st celebrated as a public holiday in Germany?

Falling exactly 75 years after the surrender of the Wehrmacht Republic, the day marks the end of National Socialism and World War II. It’s being celebrating as a one-off public holiday in the capital.

In its most pure form, this day is about commemorating Jesus’ event into heaven. Yet the public holiday, which also marks Germany’s Father’s Day, is an epic excuse for many to delve into day-drinking debauchery rather than pious reverence.

READ ALSO: Why Germans get wholly wasted on Ascension Day

This religious holiday marks the Holy Spirit’s descent on Jesus’ followers. But whether you’re religious or not, it’s always a nationwide public holiday in Germany.

This holiday is known in English as Corpus Christi, or the Feast of the Body of Christ. While it’s an official public holiday in six German states, it’s celebrated in Roman Catholic communities around the country.

READ ALSO: ‘Fronleichnam’: What you should know about Germany’s public holiday

This monumental day commemorates the reunification of former East and West Germany in 1990, following the fall of the Berlin Wall. This day marks the anniversary of religious reformation in Europe, commemorating when Martin Luther nailed his 95 proposals on to the door of a church in 1517. Only in 2017, on the 500th anniversary, was it a public holiday for all of Germany.

Catholics, and some Protestants, honour this day by visiting the graves of deceased relatives. While it's recognized in five states as a public holiday, some states have declared it a stiller Tag, in which certain activities like dancing in public are restricted.

READ ALSO: Saxony public holiday: What is the history behind Buß- und Bettag?

READ ALSO: How you can make the most of Germany's 2019 public holidays