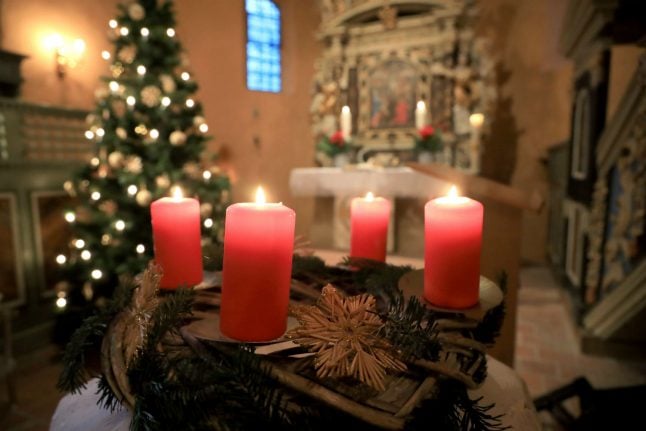 Some things are synonymous with Christmas: the tree, opening presents, the songs. However, although some are centuries-old traditions, some of these customs are newer than you might expect.

We break down the origins of some beloved signs of Christmas and explain their significance to Germany. Christmas trees can be purchased in many places across Germany: at farms or on city streets, even delivered to your door. Photo: DPA.

Christmas Tree (Weihnachtsbaum, Tannenbaum): This ultimate item of Christmas decor probably has its origin as a “paradise tree” in the nativity plays of the Middle Ages. The first record of a Christmas tree is from 1605 in Strasbourg.

Candles came a bit later in the same century. Christmas trees have been part of the celebration in German living rooms since the middle of the 19th century.

READ ALSO: What you should know about German Christmas trees

Tree Decorations (Baumschmuck): The tree is decorated (on Christmas Eve at the latest) with candles, baubles, ornaments, and tinsel. In the USA, one might find pickle-shaped ornaments for sale claiming to be ‘an old tradition from Germany.’ Legend goes that whoever spots the pickle between the branches receives an extra gift. While many Christmas shops have caught on to the trend and sell such ornaments in Germany, most Germans will not recognize the custom.

Gifts (Geschenke): Up until the Reformation, children received gifts on St. Nikolaus Day, which occurs every year on December 6th. Martin Luther and his followers wanted to break with the veneration of the saints and urged for the Christkind to become the gift giver. Now, children receive gifts from either the Christkind or the Weihnachtsmann (Santa Claus) depending on which region of Germany they live in—now several weeks later on December 24th.

Santa Claus (Weihnachtsmann): There are many different visual representations of Santa Claus to be found in Germany and around the world. The best-known image of a plump man in a red and white suit is largely the work of a Coca-Cola advertising campaign from 1931. Other nicknames for Santa come from original German customs as well: Kris Kringle from Christkind and St. Nick from St. Nikolaus. Mistletoe (Mistelzweig): Kissing under the mistletoe is a Christmas tradition that probably came to mainland Europe from prudish Victorian England. It has its origins in Celtic customs. Mistletoe can be found at most Christmas markets and grocery stores in Germany during the holiday season.

READ ALSO: How to prepare for Christmas like a German Moravian stars are still produced at a factory in Saxony. Photo: DPA.

Moravian star (Herrnhuter Stern): These multi-pointed stars which can be found adorning houses, churches, and the stalls of Christmas markets originated in a Christian boarding school at the beginning of the 19th century. They came from the Herrnhut community in southeast Saxony and were also exported by the GDR and easily shipped around the world, as they can be dismantled and packed flat.

Christmas songs (Weihnachtslieder): A list of popular Christmas songs in Germany saw “Silent Night” came out on top with 44 percent. The next best were a mix of classics such as “O Tannenbaum” or “King, Glöckchen, klingelingeling” and newer hits like “White Christmas” or “Last Christmas.”

Christmas food (Weihnachtsessen): When it comes to eating on Christmas, each region has its own customs. Most families also have their own traditions. For most, home-cooked meals are a must. In a recent survey by YouGov, only 26 percent of Germans said they could ever imagine visiting a restaurant on Christmas. A youth choir sings at a Christmas service in Baden-Württemburg. Photo: DPA.

Church service (Gottesdienst): Christmas services, whether on Christmas Eve or early morning on Christmas Day, are among the best attended events of the major churches in Germany. The Catholic churches are known to provide a ‘cheat sheet’ for those who are not used to attending services. The first piece of advice? ‘The church could get full: come early enough.’

As is the case across most of Western Europe, Germany’s main day of celebration for Christmas is the 24th, the so-called “Heiligabend”.

In the morning of the 24th, the Christmas tree is put up and decorated, and in the evening, children get to open their presents.

Shops usually close earlier on this day, and businesses shut for the whole day or a half day.

However, while Christmas Eve is the main event of the German Christmas calendar, the 25th and 26th are still designated “Feiertage” (celebration days/holidays) with their own festive traditions.

The day after the big present opening is usually more family-centered and a lot quieter – especially as all the shops will be closed.

Many of the Catholic and Protestant faith use Christmas Day to go to church for a festive service, and most in Germany will have a big, lavish feast. The dinner often features the classic Christmas goose with potato dumplings and red cabbage, but others opt for a raclette fondue.

The main meal taking place on this day is due to the tradition of fasting from St. Martin’s Day in November until Christmas Eve, where a simple meal such as potato salad or carp is served.

READ ALSO: The food and drink you need for a German Christmas feast

Known as Boxing Day in English-speaking countries, this final festive day is often marked as a day of reflection of the past year and the new year to come – it is also a public holiday in Germany meaning all the shops will still be closed. However, an exciting and unique custom begins on this day.

Christmas tree praising is a fabulous tradition in southern Germany, specifically southern Bavaria and Baden-Württemberg, where visitors come to your home to admire and compliment your tree, usually with a reward of one (but probably a few more) glasses of schnapps.

While this tradition can happen between neighbours – and can be a great way to get to know your community – it is often a feature of a group; for example, the staff of a small business or members of a football team will go to each individual’s house to praise their Christmas trees one by one.

The praising can sometimes take an entire day and can end up quite merry. It can also get pretty competitive, with the most lavish, over the top tree being hailed the winner and given a special prize (most likely also in the form of a festive beverage).

As we are still in a pandemic this activity may have to be scaled back, but could happen in small groups.