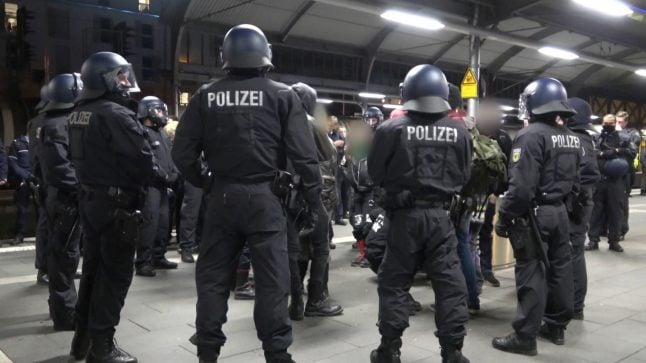 Police officers at the main station in Bonn after a demonstration by right-wing extremists in November. Photo: DPA

A shooter with suspected far-right beliefs killed nine people at a shisha bar and a cafe in the German city of Hanau, police said on Thursday, before killing himself and his mother.

In light of this news, we look back at what Germany proposed in December last year to fight against far-right terror.

READ ALSO: Shootings in Germany: What we know so far about suspected far-right shisha bar attacks

The German government is planning an overhaul of its domestic intelligence and law enforcement agencies next year in a bid to crack down on right-wing extremism following high profile terror attacks.

So what are the plans?

The Bundestag has approved 600 new roles, with 300 intended for the Federal Criminal Police Office (BKA) and 300 for the Federal Office for the Protection of the Constitution (BfV). In addition, there are 500 previously planned extra posts for the BKA, which are not intended solely for combating right-wing extremism.

Authorities are also planning to have more of a focus on understanding the wider picture of extremist networks rather than just individuals and want better communication between all agencies working at a local and federal level.

There’s also set to be a “central office for far-right extremists in public service” which will be set up by the domestic intelligence service to uncover cases of extremism in the police, military and civil service.

Interior Minister Horst Seehofer, Thomas Haldenwang, president of the BfV and Holger Münch, head of the BKA, unveiled the plans in Berlin on Tuesday.

“We have to take a much broader approach in our fight against right-wing extremism,” said Haldenwang – with more staff and new strategies, he added.

READ ALSO: How Germany plans to crack down on dangerous far-right extremists “In the past, we have concentrated very strongly on violence-oriented right-wing extremism, focusing on certain individuals,” explained Haldenwang.

“Today we know; we need a holistic approach.”

In addition to far-right organizations, clubs and events, emerging right-wing scenes, the so-called “New Right” should be given greater attention, authorities said.

Haldenwang named the nationalist Identitäre Bewegung (Identitarian Movement) as well as the AfD youth organization “Junge Alternative” and the more radical “Wing” (Flügel) of the party as groups to be watched more closely.

Haldenwang said it was important to better recognize networks and consider the contacts of well-known extremists.  Important figures of the scene are to be discussed at “case conferences” between security authorities in the federal and state governments.

There will also be a stronger focus on extremist cyber networks, and greater cooperation with other parts of the government.

While Germany is one of the most difficult countries to acquire a gun, extremists often turn to the black market or underground suppliers.

Right-wing extremism is high on the political agenda for several reasons.

Seehofer said in 2019 there are an estimated 24,000 far right extremists in Germany and half of them are considered potentially violent with “a very high affinity for firearms”.

According to a report in the Tagesspiegel newspaper, the intelligence service now expects there to be a total of 32,200 right-wing extremists in 2019 – compared with 24,100 in the previous year.

The overhaul of the departments fighting against terror follows two high-profile cases this year.

Two people were killed and a larger bloodbath narrowly avoided after a gunman, who published a “manifesto” online supporting far-right ideology, tried to storm a synagogue on the Jewish holiday of Yom Kippur in a planned anti-Semitic attack.

Meanwhile, the murder of pro-refugee Kassel politician Walter Lübcke at his home in June has sent shock waves through the country.

BKA boss Münch said: “Violence is on the rise, propaganda offences are on the rise.”

In addition to foreigners and political opponents, the focus is increasingly on advocates of a liberal refugee policy, he added.

“Threats on the Internet and acts of violence are increasingly creating a climate of fear to which we need to respond,” said Münch.

Seehofer also referenced the neo-Nazi group, the Nationalist Socialist Underground (NSU), which terrorized Germany, carrying out a series of anti-immigrant murders and attacks from 1999 before they were uncovered in 2011.